Sultanahmet and Beyond: Things To Do in Istanbul Old City 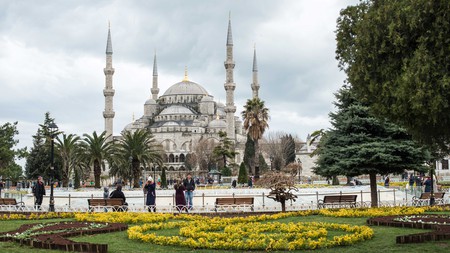 Whether it’s walking ancient city walls, haggling in historic bazaars, absorbing the sanctity of Ottoman mosques, sipping beer on a rooftop bar, watching the sun go down on the Golden Horn or relaxing in a Turkish bath, there’s always something more to do in Istanbul Old City, a place aptly known as ‘the city of the world’s desire’.

The heart of Istanbul remains its fascinating Old City, home to some of the most historic sites of this vibrant megapolis. Dramatically located on a peninsula pointing across the Bosphorus Strait to Asia, Sultanahmet was formerly the capital of the Byzantine and Ottoman empires. 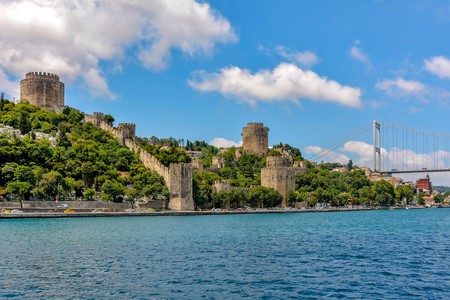 The mighty Walls of Theodosius kept the city safe from everybody from Attila the Hun to the all-conquering Muslim Arabs for a thousand years before falling to the Ottoman Turks in 1453. Running some 6.5 kilometres (four miles) across the spine of the peninsula from the Sea of Marmara to the Golden Horn, these late-Roman walls have survived remarkably well. Walk through neighbourhoods virtually untouched by tourism, past hole-in-the-wall restaurants, smoky tea shops and cottage gardens in the wall moat. Key sights include the Church of St Saviour in Chora (Kariye Museum), famed for its mosaics, the beautiful Ottoman Mihrimah mosque and the former palace of the Byzantine emperors, Blachernae (Tekfur Saray).

Pro-tips: For safety, avoid walking the walls at dusk. Reach the southern end of the walls by using the Marmaray metro line. At the end of your walk, catch a ferry down the scenic Golden Horn from Ayvansaray. 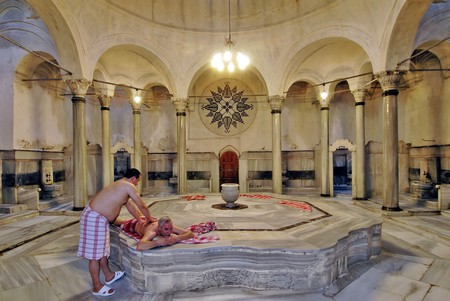 Steam-clean yourself in a hammam

Cleanliness is an integral part of Islam, and in the days before most homes had their own water supply, the hammam (Turkish bath) played a key role in the life of the city. Endowed by sultans, huge domed temples to hygiene arose amongst the city’s largely wooden houses. Visitors today flock to get the hammam experience, lounging on the warm marble, sluicing themselves with warm water from elegant copper bowls or surrendering to the pummelling and scrubbing of an expert masseuse. The Hürrem Sultan, Cağaloğlu and Çemberlitaş are just three gems in the Old City.

Pro-tip: The three hammams above have separate sections for men and women – for a mixed-sex session, try the Süleymaniye hammam. 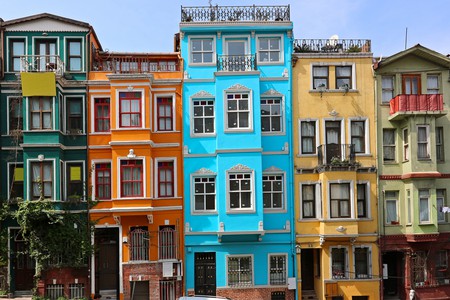 Stroll the streets of Balat and Fener

The narrow, cobbled streets of these two districts, tumbling down the hillside to the Golden Horn waterfront, were once the preserve of the city’s Jewish, Armenian and Greek communities. Some of the crumbling late-19th-century European-style terraced houses are being bought up and gentrified, with a plethora of new vintage-style cafés springing up around St George Greek Orthodox Cathedral. It’s a great area to just wander, but don’t miss the recently restored and quirky cast-iron Bulgarian church of St Stephens.

Pro-tip: Ferries run from the pier at Karaköy (easy to reach from Sultanahmet) and stop at both Fener and Balat. 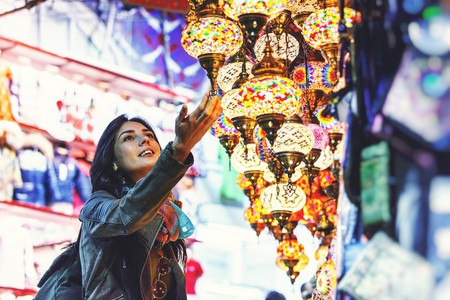 Dive into the maze of the Grand Bazaar | © petekarici / Getty Images

Get lost in Istanbul’s biggest bazaars

The Grand Bazaar with its 4,000-plus shops and the more intimate Spice Bazaar may be touristy, but these domed temples to late-Medieval consumerism still draw plenty of visitors. Dive into the maze of the Grand Bazaar for everything from fake designer jeans and handmade Turkish rugs to leather jackets and traditional gold jewellery. The Spice Bazaar does exactly what it says on the tin – in addition to dried fruits, nuts and the ubiquitous Turkish delight.

Pro-tip: Exit the spice bazaar via its western gate and wander up bustling Hasırcılar Sokak (‘street of the strawmakers’) to revel in hole-in-the-wall shop after shop selling everything from straw brooms to plump pistachios, all the while smelling the delicious aroma wafting from Kurukahveci Mehmet Efendi, one of Istanbul’s premier coffee roasters. 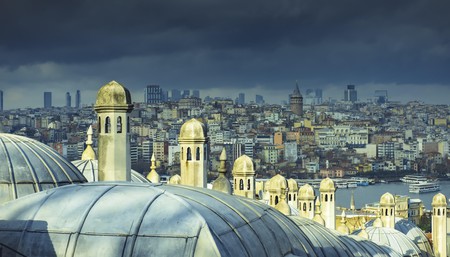 There are exceptions, but Istanbul’s Old City is not noted for its nightlife. Hotel bars, however, present some of the best options for an evening drink in the area. Try the terrace of the Hotel Arcadia Blue at sunset for breathtaking views across the domes and minarets of the Old City, or check out the rooftop of the nearby Pierre Loti Hotel.

Pro-tip: It’s not a hotel, and it serves tea, Turkish coffee and traditional fruit sherbet drinks rather than alcohol, but the views across the Galata Bridge and up the Bosphorus from the multiple terraces of the Ağa Kapısı café, hidden on a narrow street beneath the Süleymaniye Mosque, are sublime. 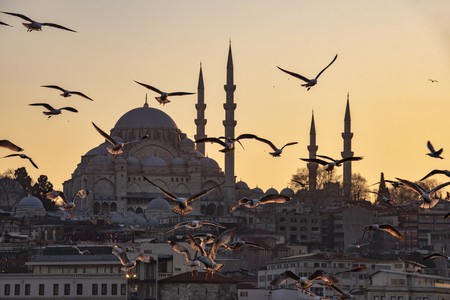 Explore the Galata waterfront at sunset

Head down to the busy market area spanning Galata Bridge at sunset to see how the Golden Horn gets its name. Look up to the silhouette of the cascading domes and slender minarets of the Süleymaniye Mosque atop the city’s third hill, and grab a cold beer in one of the myriad café-bars built into the bridge itself.

Pro-tip: Take care walking along the parapet of the bridge for photos – it’s lined with local anglers casting their fishing hooks into the inlet below. 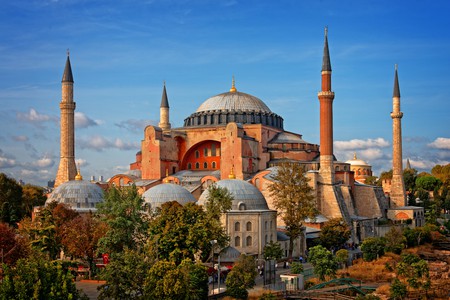 Over a thousand years of history separates these two monumental and iconic buildings, rising proudly some 500 metres (1,640 feet) apart in the heart of Sultanahmet. Start with the Hagia Sophia, or Church of the Holy Wisdom, built in 527 at the behest of Justinian (an important emperor of the Byzantine Empire). Today a museum, it is one of the world’s truly great buildings, with its awe-inspiring central dome and gold mosaic-covered interior. A short stroll across a green and fountain-adorned square brings you to the domed Blue Mosque (Sultanahmet Camii), built deliberately opposite the Hagia Sophia to emulate the wonders of the earlier structure. It gets its name from the largely blue Iznik tiles, over 20,000 of them, that adorn its interior.

Pro-tips: Make sure you visit the square between the two buildings at night to see their architectural beauty enhanced by subtle lighting. 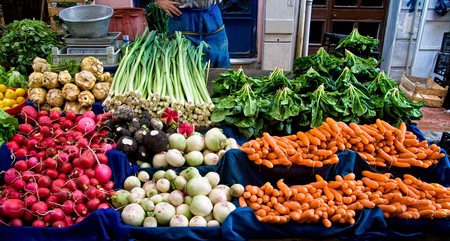 Buy vegetables for the week at Çarşamba (Wednesday) market

The city’s oldest, largest and most vibrant street market has given its name to an entire district: Çarşamba (‘Wednesday’ in Turkish). Sprawling for what seems like miles along the streets radiating out from the imperial Fatih Mosque, there’s stall after stall heaped with fruit, vegetables, household utensils and clothes. Çarşamba is noted for its conservatism, so expect to see plenty of shoppers dressed in traditional clothes, and come dressed modestly yourself. 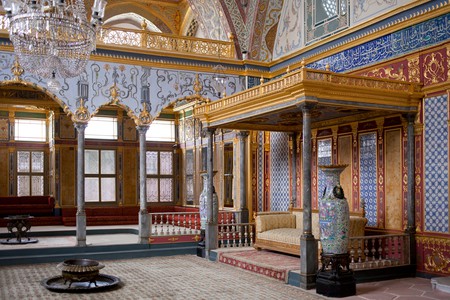 Visit Topkapı Palace, the nerve centre of an empire

The Topkapı Palace is a whole series of buildings set amongst gardens, rather than a Versailles-style edifice, and a half-day visit is barely sufficient to do it justice. From here, assorted Ottoman sultans ruled an empire stretching from the Balkans to Arabia and from North Africa to Crimea. There are tiled kiosks, pleasure gardens, armouries and vast kitchens to explore – and the views across the Bosphorus to Asia are second to none.

Pro-tip: For a discounted, fast-track entry to the palace (and many other museums, including the Hagia Sophia), get a five-day Museum Pass Istanbul (this can be purchased online, from many hotels or at the museums themselves).