Historic Restaurants To Try in Sultanahmet 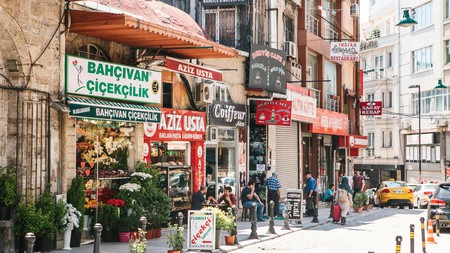 Whether eating rice-stuffed mussels from a street cart or sitting down to an all-inclusive meze and fish meal in a plush Sultanahmet restaurant, you won’t be disappointed with the food scene in Istanbul’s most historic neighbourhood. 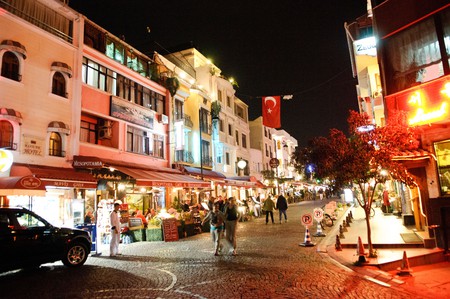 Istanbul is a foodie’s paradise, its rich and varied cuisine reflecting the fact that this vibrant metropolis was the capital of an empire that once stretched from North Africa to the Crimea and from the Balkans to the Arabian Peninsula. The tastes of all these lands have played their part in forming this thriving city’s culinary traditions and have made even the humblest Istanbulite something of a food connoisseur. Here are some of the best restaurants to try in Sultanahmet. 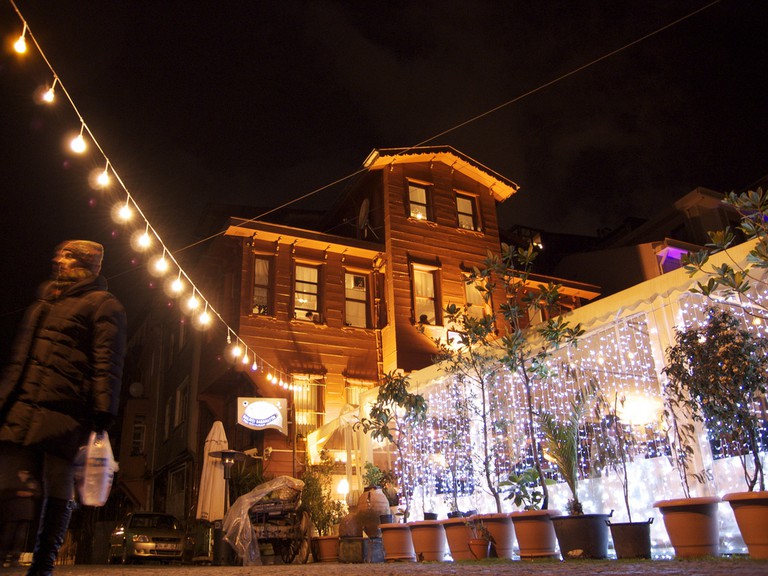 Established in 1927, only four years after the foundation of modern Turkey, this fish restaurant has maintained its popularity by sticking to the basics but doing them exceedingly well. Though located just a few minutes’ walk downhill from the tourist honeypot around the iconic cathedral of Hagia Sophia, an area where few local people still live, such is its reputation that it attracts Istanbulites from right across the metropolis. They are drawn by its atmospheric setting: a traditional wood-built mansion house fronting a steep cobbled street, with white-clothed tables set out on the vine-shaded terrace in summer, and a limited but well-chosen selection of meze and freshly caught and cooked fish. The fragrantly spiced mussel pilaf is an extremely popular starter, and justifiably so; the grilled turbot is superb if you visit in season. Visitors tend to fuss over the wine list, while most local diners keep it trad and sip cloudy white glasses of aslan sütü (lion’s milk), the fiery Turkish aniseed spirit raki mixed with iced water. 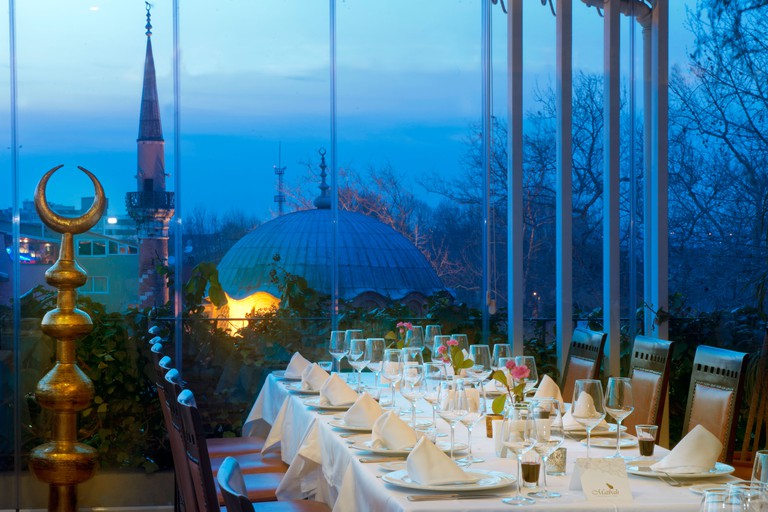 Located on the ground floor of the grand Ottoman Hotel Imperial, just off Sultanahmet Square and virtually in the shadow of the Hagia Sophia, Matbah’s mock-Ottoman decor does not scream authenticity, and the vast majority of its clientele are foreign visitors. Yet this place is deservedly very popular, serving up dishes based on those prepared in the kitchens of the nearby Topkapı Palace, once the centre of the Ottoman Empire and now one of Istanbul’s top tourist attractions. This kind of courtly, Persian-influenced cuisine is no longer available in most contemporary Turkish restaurants. Think rich meat dishes stewed with fruits such as quince and plum, then subtly flavoured with the likes of saffron, ginger and coriander. Alcohol is served too, with some fine wines to choose from, and the views down over the domes of the Ottoman-era Caferiye religious school are wonderful, especially when lit up at night. 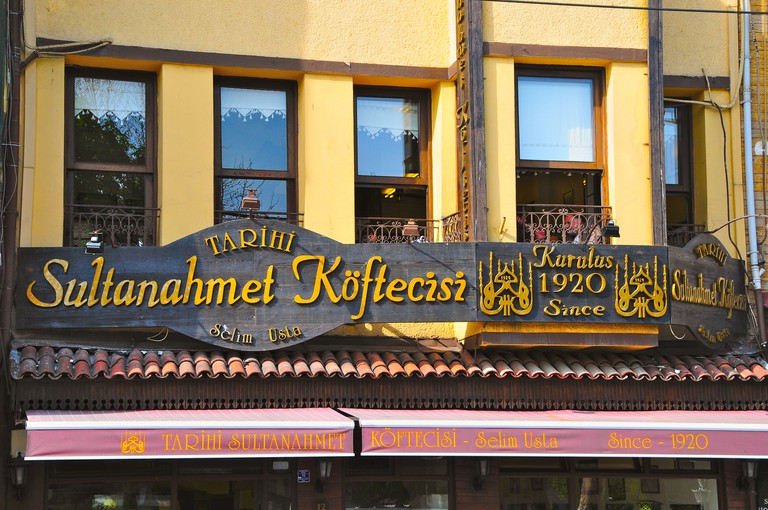 Situated right in the heart of Sultanahmet alongside Divan Yolu (once an imperial road and the main approach to the heart of the old city in Ottoman times), this bustling multi-floor restaurant serves up delicious Turkish meatballs (köfte). Set up way back in 1920, it’s one of the few places in Sultanahmet to attract local residents as well as visitors, and is best patronised as a lunchtime retreat from a serious day’s sightseeing. Go for the standard deal – slightly chewy yet tender grilled meatballs, served with a pickled pepper or three, a tangy tomato sauce and a bowl of crusty white bread. If you’re really hungry, a side of house piyaz (white beans in olive oil) goes down well. To drink? Look no further than a creamy glass of ayran, a traditional salted yoghurt drink that is the perfect accompaniment to the köfte.

Eating in a traditional Istanbul meyhane (a kind of tavern) is generally a boisterous affair, with Romany (Çingene in Turkish) musicians wandering from raucous table to table and encouraging the bolder among the liquored-up Istanbulites to belt out traditional ballads while picking through heaps of meze and sipping glasses of raki. For a far more refined version of this noble tradition, head down towards the Sea of Marmara from Sultanahmet Square to Giritli, located in a beautifully restored wooden mansion, complete with a shady garden for al fresco dining in summer. By far the best option is the set menu, with over 20 meze dishes, a handful of hot appetisers and a fish main – plus as much wine, raki or beer as you can handle included in the (very reasonable) price. The restaurant was established by Muslim immigrants from Crete, and there are a few dishes here you won’t find in a standard Turkish fish place. 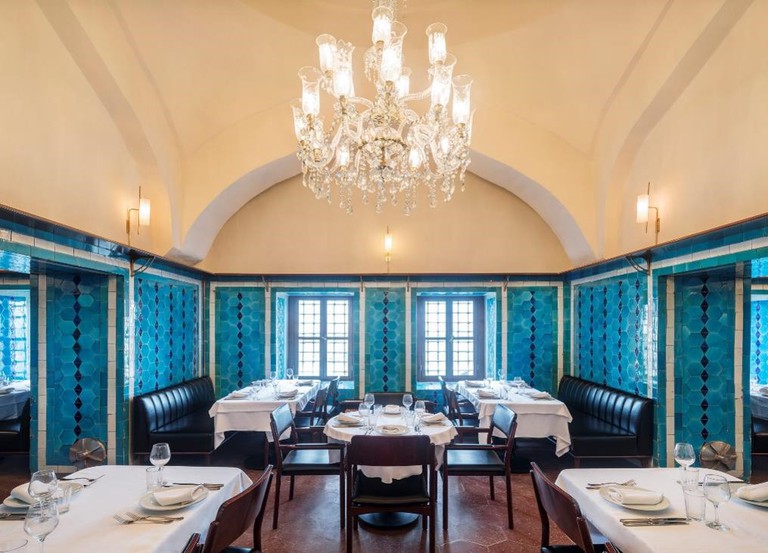 This Istanbul institution, opened in the 1920s in the Ottoman-era Spice Bazaar (Mısır Çarşısı) by a Greek shepherd from Central Anatolia, closed its doors in 2016 but reopened in 2018. It’s worth coming for the lovely interior alone, with its signature blue and white tiles and vaulted ceilings. Fortunately, the food is good as well – the chef of 20 years, Abdullah Sevim, regained his old job when Pandeli’s reopened – try his succulent hünkar beğendi (literally ‘the sultan loved it’), a rich dish of tender lamb served on a bed of smoky, chargrilled aubergine. No alcohol is served. 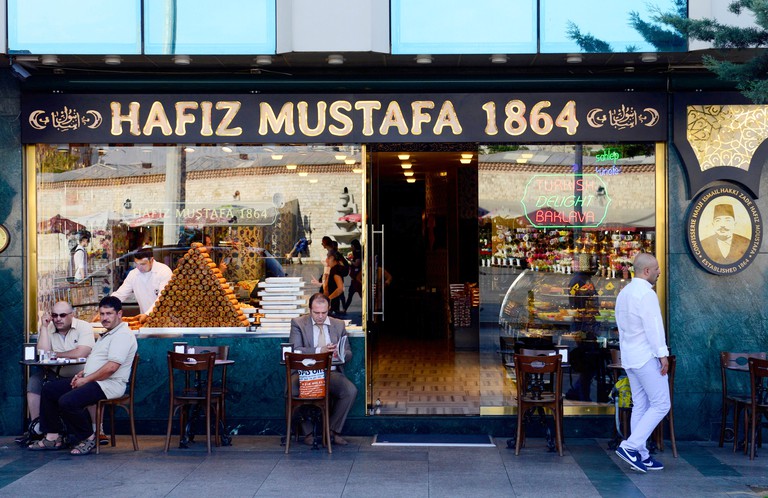 For those with a sweet tooth, this sprawling café/patisserie located opposite the Sultanahmet tram stop is a must. The whole gamut of Turkish desserts is on offer, from trays of deliciously crunchy baklava to melt-in-the-mouth milk and rice puddings and the gloriously chewy maraş ice cream – as well as a few Western strays such as plump chocolate eclairs. The choice is bewildering – sip on a tulip-shaped glass of hot, black Turkish çay (tea) or a silky smooth latte while making your choice. There are a few delicious savoury dishes too, including the flaky cheese pastry su böreği, and the restaurant does a decent Turkish breakfast spread. The whole establishment is run under the auspices of the grandly named Turkish Society for Literature – no wonder it maintains an air of old-world gentility. 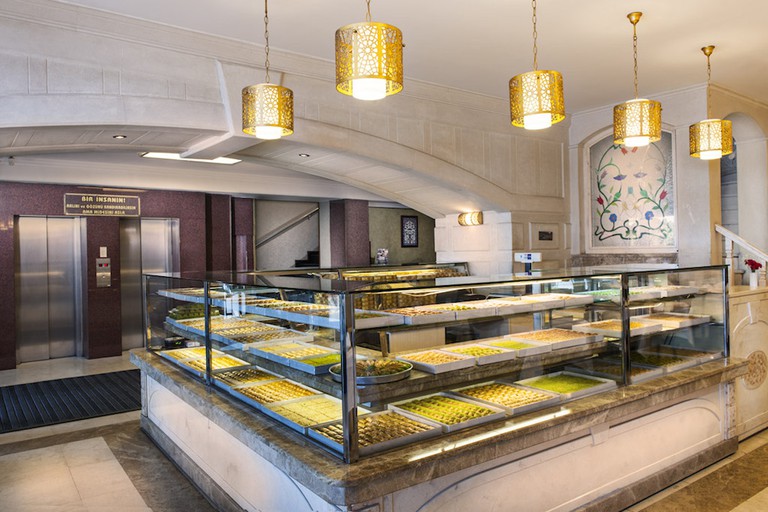 The southeastern Turkish city of Urfa, bordering Syria, is famed for its spicy, Arab-influenced meat dishes. Back in the 1960s one Hamdi Arpacı, leaving his then impoverished home city for the bright lights of the big city, arrived in Istanbul and set up a simple stall selling tender kebabs to shoppers around the Spice Bazaar on the Galata waterfront. So successful was he that his street stall was eventually forsaken for the five-storey premises close to the Spice Bazaar where the family business still thrives. The kebabs here, grilled to perfection over charcoal, are as good as any in the city. Also worth trying is the delicious lahmacun, often misleadingly translated as ‘Turkish pizza’ on tourist menus. It’s actually a thin, light flatbread topped with delicately spiced minced lamb baked to perfection in a wood-fired oven. Add deep-red isot chilli flakes for an extra kick, along with parsley and lemon juice. Unusually for a kebab restaurant, alcohol is served. Save room for the succulent walnut or pistachio-filled baklava, another southeastern Turkish speciality. 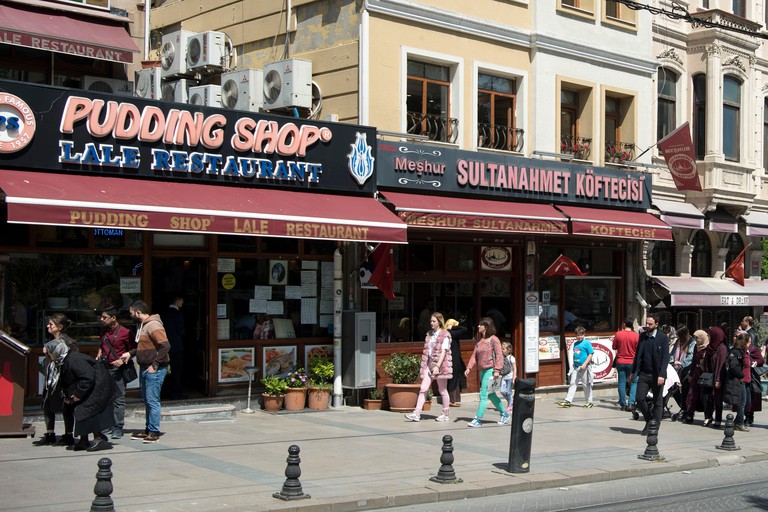 The Lale (‘tulip’ in Turkish) was set up by the enterprising Çolpan brothers in 1957 on Sultanahmet’s main drag, Divan Yolu, and the hippies and other travellers who frequented it in the 1960s soon began to refer to it as the ‘Pudding Shop’ after its signature dish of rice pudding. It became the place for travellers to meet up before heading east to Iran, Afghanistan and India on the hippy trail, and some of the notes these kaftan-clad pioneers put up in the shop to share information or ask for lifts form part of the Lale’s contemporary decor. The hippies have long gone, but the Pudding Shop remains and continues to serve up Turkish stews and other traditional goodies, canteen-style, to hungry sightseers. It may not be the greatest restaurant in Sultahahmet, but it’s a piece of travel history – and the rice pudding is excellent.