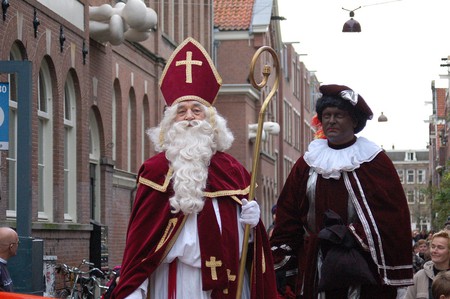 During the weeks preceding Sinterklaasavond, the Dutch equivalent to Christmas Day, people throughout the Netherlands dress up as a controversial figure called Zwarte Piet (Black Pete). This dark-skinned, clownish character consistently polarizes opinions, with many condemning the tradition as opaque racism, while others maintain that depictions of Zwarte Piet are harmless.

According to folklore, Zwarte Piet accompanies Sinterklaas as he travels through the Netherlands during the festive season, handing out gifts and candy to children along the way. As he is believed to hail from Moorish Spain, people portraying the character traditionally wear blackface makeup and thick red lipstick. To complete their costumes, performers don garish, renaissance outfits, large hooked earrings, and curly black wigs.

At winter parades, large groups of people dressed as Zwarte Piets follow their town’s official Sinterklaas as he makes his rounds. Until relatively recently, these celebrations went almost completely unchallenged, and Zwarte Piet was seen as a vital part of Sinterklaasavond. However, a growing number of people are now questioning the connotations that surround the character. 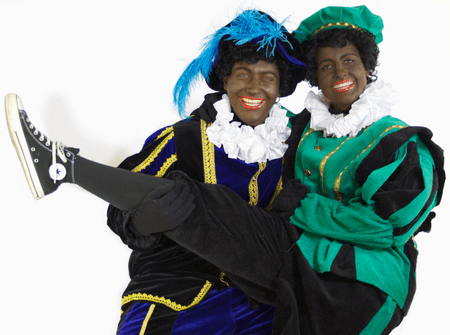 For obvious reasons, the tradition has been compared to American minstrel shows and described as racially insensitive. Besides his appearance, concerns have been raised over the character’s relationship to Sinterklaas; although he is now generally portrayed as a helper, older narratives tend to cast Zwarte Piet as a servant or slave.

Over the past few years, anti-Zwarte Piet petitions and demonstrations have become increasingly common in the Netherlands. While the success of these protests is difficult to measure, there has been noticeable change when it comes to retail, and several Dutch stores have taken Zwarte Piet merchandise off their shelves or considerably altered the character’s appearance. 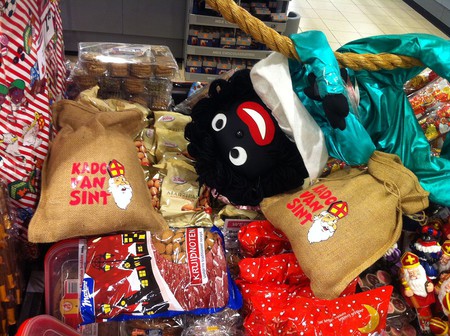 Possibly in response to this backlash, this year, many Zwarte Piet performers have toned down their costumes and decided to splatter small black marks on their face that represent chimney soot or wear alternatively colored makeup.

Amid these tensions, a large demographic maintains that the character’s positive attributes outweigh his negative undertones, or that dressing up as Zwarte Piet is simply a fun pastime, aimed predominantly at children, which shouldn’t be scrutinized too harshly. For many, he represents Christmas cheer and is inexorably linked to yuletide celebrations.

Due to these conflicting opinions, it is hard to predict what will happen to the tradition and whether, in the future, Zwarte Piet is set to disappear completely, undergo adjustments, or remain unaltered.