You Can Buy Burgers from Vending Machines in the Netherlands 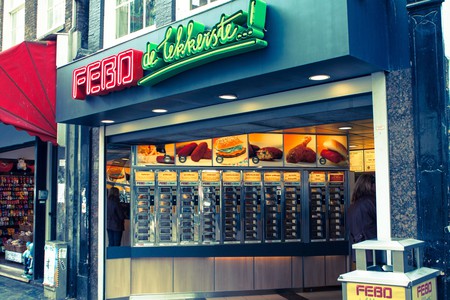 While it might seem incredibly bizarre to foreigners, in the Netherlands it is common for fast food restaurants owned or franchised by FEBO to serve burgers and other fried foods through vending machines. This unusual type of service allows customers to quickly purchase classic Dutch fast food and has existed in the Netherlands since the 1960s.

In 1942, Dutch entrepreneur Johan de Borst opened a regular bakery on Amsterdam’s Ferdinand Bolstraat under the title FEBO. This venture’s name was derived from the first two letters of Ferdinand and Bolstraat, creating a compound that reflected its location. After launching several other bakeries in Amsterdam under the same title, de Borst decided to establish an automated takeaway restaurant on Karperweg in 1960, where he would sell homemade, meat filled croquettes.

At the time automated restaurants were common in other cities throughout Europe and North America. Although they gradually fell out of favour elsewhere in the world, they continued to attract customers in the Netherlands and FEBO’s vending machine restaurants gradually became a nationwide phenomena. Today, there are around sixty FEBOs in the Netherlands — twenty-seven of which are found in Amsterdam. 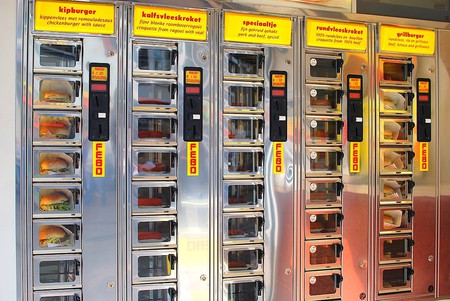 Almost every FEBO in the country currently features the company’s famous vending machines. These glass panelled contraptions usually contain around five different items, including frikandel sausages, hamburgers and croquettes. While some FEBOs are now equipped with contactless payment panels, most still have slots for coins and only accept cash.

After receiving a payment, the machines unlock specific panels in order to allow customers to access their chosen dish. Although purchasing food is essentially automated at FEBO, the restaurant employs cooks to prepare the food in question and restock the vending machines when necessary. In fact the items available from these vending machines usually only stay in their given boxes for a few minutes, before being purchased — which means that the food at FEBO is generally pretty fresh (albeit highly calorific). 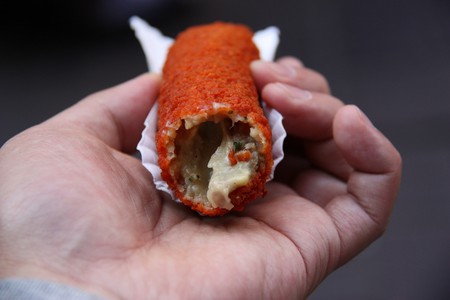 A croquette from FEBO | © Kham Tran / WikiCommons
Give us feedback