Where to Go for the Best Panoramic Views in Amsterdam

© Blue Amsterdam
Due to the city’s notoriously flat geography, it can be quite difficult to find a decent lookout point in Amsterdam. Fortunately, there are several sky-scrapping hangouts spread around Amsterdam that offer visitors incredible, panoramic views across the city and its surroundings.

Bar, Restaurant, European, $$$
Canvas offers panoramic views of the city | Courtesy of Canvas
This popular bar, restaurant and nightclub is perched on top of a trendy boutique hotel in Amsterdam-Oost called Volkshotel. The venue features impressive, 360-degree windows and trails onto an open-air terrace that towers above Amsterdam’s eastern neighbourhoods. Many of Amsterdam’s most iconic landmarks are visible from this classy spot, including the city’s tallest churches and the canal belt.
More Info
Open In Google Maps
150 Wibautstraat, Amsterdam-Oost Amsterdam, Noord-Holland, 1091 GR, The Netherlands
+31202612110
View menu
Visit website
Visit Facebook page
Send an Email
Give us feedback

A’DAM Toren stands on the northern banks of the river IJ and contains several different cultural initiatives that are spread over the building’s 20 floors. There’s an incredible, open-air observation deck located on the tower’s roof that’s accessible via a high-speed elevator at its base, which features the highest swing set in Europe. This hair-raising attraction dangles around 100 metres above Amsterdam and offers visitors an adrenaline-fuelled ride above Amsterdam’s skyline. 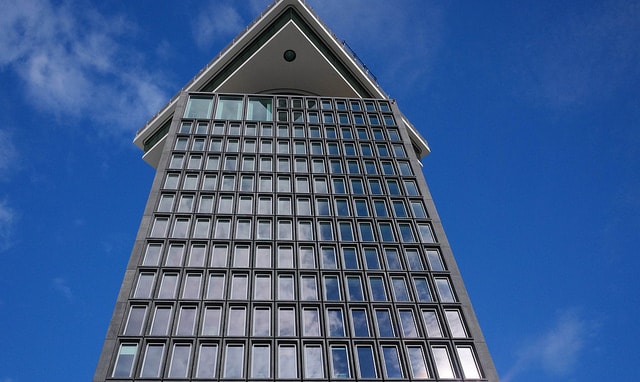 Science Museum
NEMO Science Museum juts out on the Oosterdok in the centre of the city | © Ivan Nesterov / Alamy Stock Photo
Amsterdam’s cutting-edge science museum, NEMO, resembles an enormous ship that’s about to set sail from the city’s harbour. It is possible to scale a large staircase on the building’s southern side and access an awesome, slanted terrace that faces Amsterdam’s city centre. This panoramic spot edges onto a charming café and bar that serves refreshments throughout the day.
More Info
Open In Google Maps
2 Oosterdok, Amsterdam-Centrum Amsterdam, Noord-Holland, 1011 VX, The Netherlands
+31205313233
View menu
Visit website
Visit Facebook page
Send an Email
Give us feedback

This cosy café and restaurant is housed inside a glass tower that stands in the centre of the city’s historic canal belt. The whole venue is tailored around panoramic views, and guests can enjoy meals or drinks whilst marvelling at Amsterdam’s skyline. 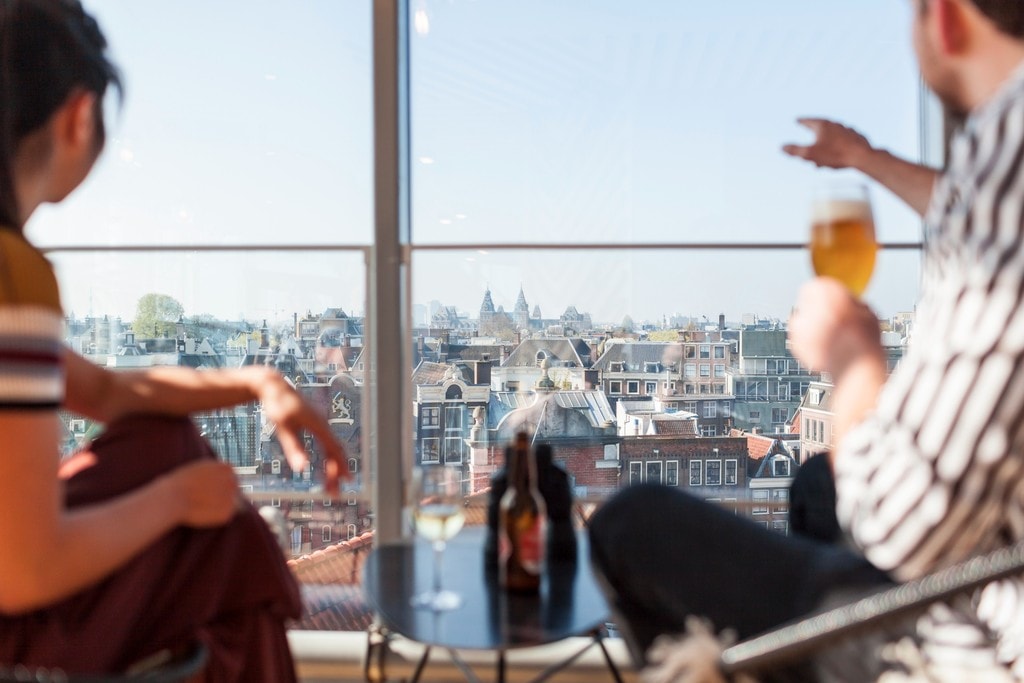 This aptly titled cocktail bar is located inside the 23rd floor of Amsterdam’s exclusive Hotel Okura. Even though it’s managed by the hotel, the bar welcomes members of the public that aren’t currently staying at Okura and serves a wide array of classy drinks, including classic cocktails and champagne. 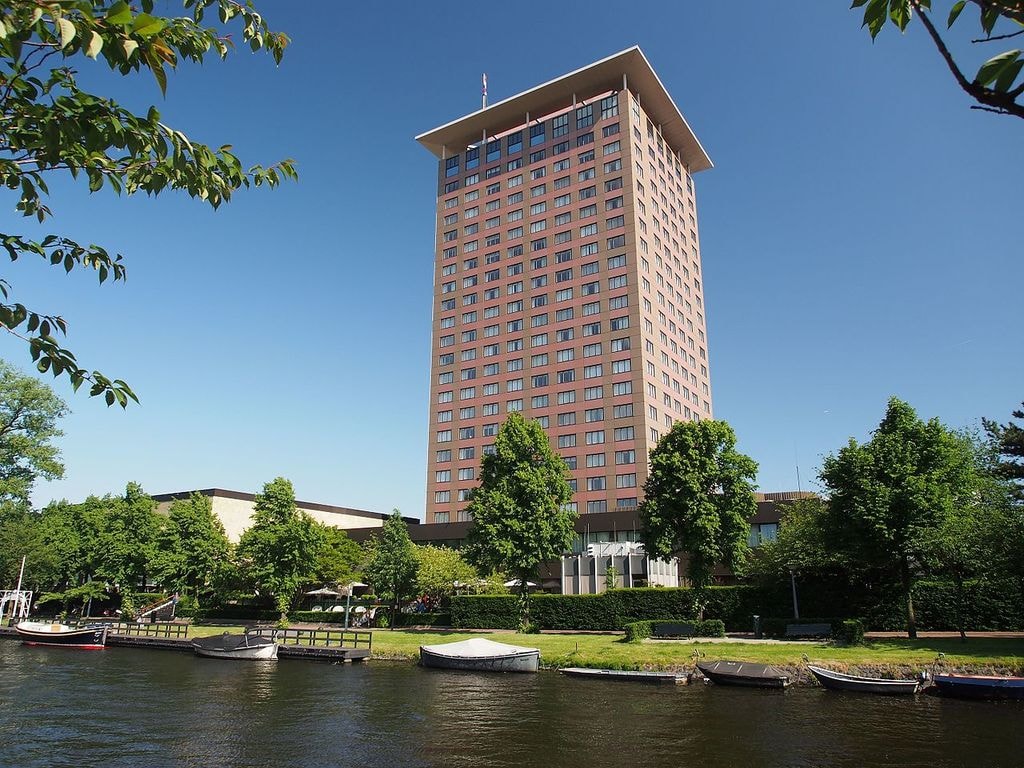 SkyLounge Amsterdam is an award-winning rooftop bar that offers guests 360-degree views across Amsterdam. The bar is located on the top floor of DoubleTree by Hilton Amsterdam Centraal Station and stays open until 3am every weekend. The view from SkyLounge Amsterdam is utterly stunning and pairs wonderfully with one of their signature cocktails. 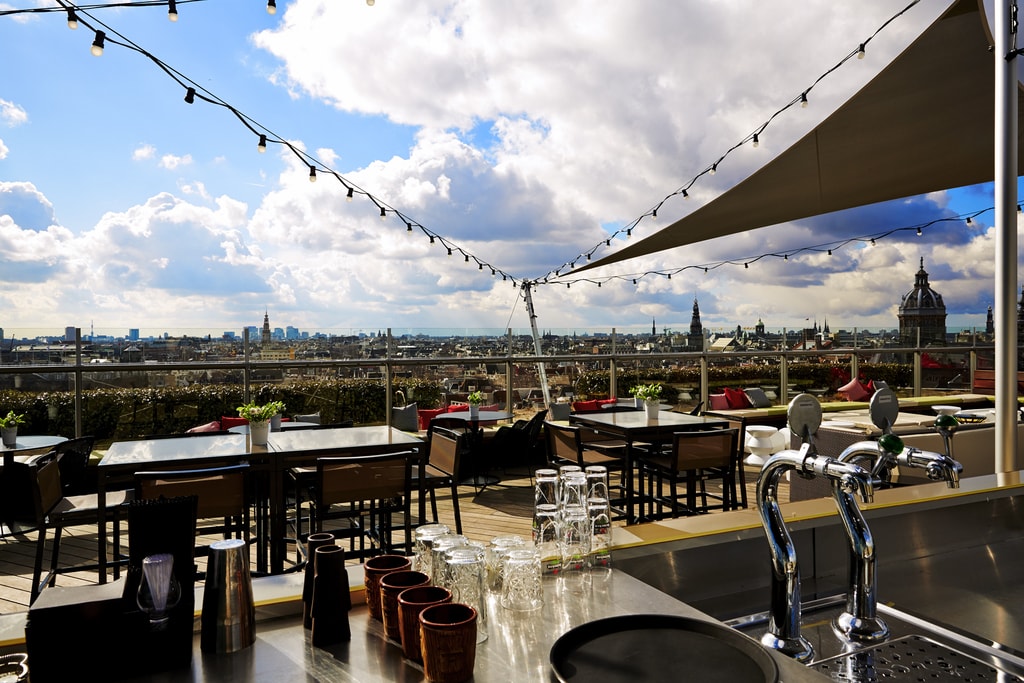 If you’re looking to splash some cash while visiting Amsterdam, it’s definitely worth checking out this exclusive helicopter tour above Amsterdam’s skyline. The helicopter in question seats four people and flies over Amsterdam’s most iconic landmarks, allowing travellers to experience the city’s charming historical sights from the air.