What They're Listening To In The Netherlands This Fall 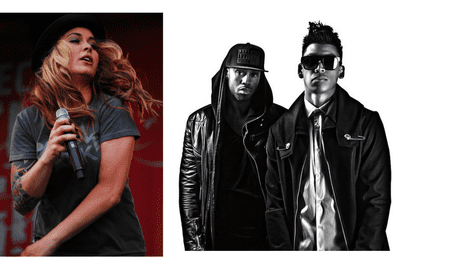 Autumn in the Netherlands brings with it three major musical events; Den Haag’s TodaysArt, Amsterdam’s ADE and Utrecht’s Le Guess Who. Each of these festivals will showcase leading artists from a wide spectrum of genres, meaning that music aficionados have plenty to look forward to. Here’s run down of the top albums to look out for this season in the Netherlands.

In a relatively short time span, Hunee has successfully created a brand of electronic music that is uniquely his own. His last studio release, Hunch Music, playfully skipped between soul, house, techno and afro beats, creating distinctively upbeat tracks that sounded equally impressive through a set of headphones or a stack of full-scale speakers. Rush Hour Records recently released a collection of remixes sampling this album and during Autumn Hunee is set to play at De School and ADE.

Yung Internet music is unashamedly ostentatious. Their tracks capture Amsterdam‘s vainglory nightlife using slick lyrics and biting loops as a stand-in for the city’s peculiar swagger. This hip-hop trio know millennial sensibilities, rapping about iOs, failing internet connections and long nights partying in Rembrandtplein. They released Free Wifi early this year and performed the album at many of the Netherland’s major summer festivals.

De Staat are an alternative rock band from Nijmegen that have recently completed a tour alongside Muse. The band work around a classic rock set-up, using guitars, vocals and drums to create adrenaline-fuelled anthems that inspire head banging and mosh pits. De Staat will be playing across Western and Central Europe this Autumn, performing their latest album O and undoubtedly, their staple track, Witchdoctor.

Anouk ‘Queen for a Day’

Anouk is a national treasure and has been active since the late 90s. Her explosive debut hit Nobody’s Wife immediately captured the Netherlands’ heart and quickly made her an international star. Today, Anouk remains true to her roots, using her expressive vocals as the foundations for catchy rock tracks that draw from her personal experience.

Dutch dance producer’s GLOWINDARK have been making tracks alongside high-profile names for years. Previously, the duo have worked with David Guetta and Lethal Bizzle, and this year they teamed up with Den Haag based hip-hop group, SFB. This album also features emotionally charged vocals from rapper Philly Moré, making for an astounding mix of styles.

Psychedelic indie-rockers, Eerie Wanda‘s music is draped in dreamy tones and weary melodies, a sound that radiates a sense of bittersweet nostalgia. The band’s barebones approach to song structure is balanced by their remarkable ability to sway between haunting vocals and breezy guitar riffs. Eerie Wanda have just returned from their first American tour playing alongside the likes of CocoRosie and Thee Oh Sees.

The Hague’s BAKK records have always been at the forefront of Dutch electronic music and will be hosting a club night at this year’s TodaysArt festival. The label recently pressed producer SFV Acid’s latest LP, an album that feels like a late night stroll through a sprawling cityscape. Throughout the album, SFV Acid treads lightly, using measured bass lines and warped synthesisers to create charmingly distorted tracks.

Broederliefde are a hip-hop collective hailing from Rotterdam. The group started as a pet-project by a group of friends that were united by their love of football and rap music. From these humble beginnings, Broederliefde shot into stardom after releasing a number of acclaimed mixtapes and videos. Their third studio album, Hard Work Pays Off 2, was an immediate success and has spent 18 weeks at the top of the Dutch album charts.

In early November, prolific Russian-born composer Lera Auerbach will be joining the Netherlands Chamber Orchestra at Utrecht’s Le Guess Who festival. There she will be performing her newest composition, 72 Angels, for the first time. This majestic symphony is heavily inspired by Jewish mysticism and appeals to Kabbalah’s core teachings. While 72 Angels is yet to be released, Auberbach’s early work is available to download from most online music outlets.

Douwe Bob is a national heartthrob who shot to fame after appearing on the Dutch talent show DBSSW. He recently represented the Netherlands at this year’s Eurovision Song Contest and reached the competitions final stages. He sings modern folk music and mainly sings in English while playing the semi-acoustic guitar. His beautiful, flittering vocals are comparable to Art Garfunkel’s early work.