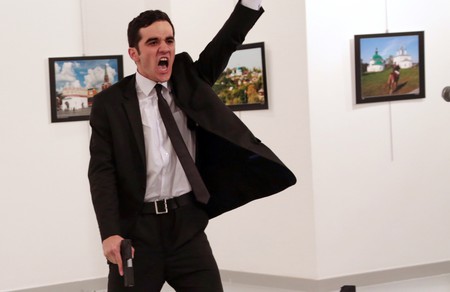 Detail of An Assassination in Turkey | © Burhan Ozbilici / 'The Associated Press'

Continuing its 100-city tour, the World Press Photo exhibition opens in London at the Royal Festival Hall for a two week run in November.

WARNING: Readers might find some of the images in this article upsetting.

Honouring a photographer ‘whose visual creativity and skills made a picture that captures or represents an event or issue of great journalistic importance in the last year’, the prestigious title of World Press Photo of the Year goes to Associated Press photographer Burhan Ozbilici’s for his unbelievable image of Mevlüt Mert Altıntaş after he fatally shot Russia’s ambassador to Turkey, Andrey Karlov. Taken on December 19, 2016 at an art exhibition in Ankara, which the ambassador was attending, it captures the 22-year-old, off-duty police officer wielding his gun while Karlov lies dead on the floor. 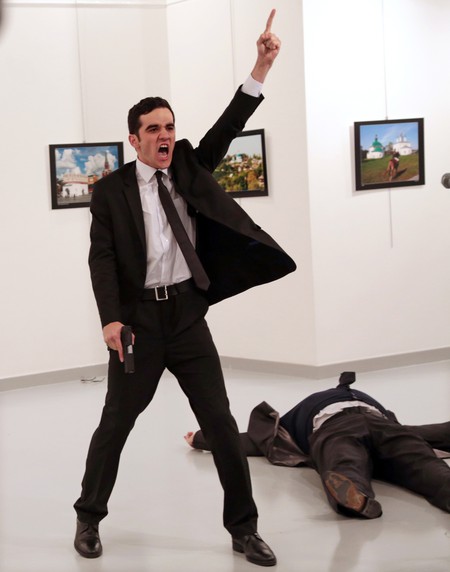 An Assassination in Turkey | © Burhan Ozbilici, The Associated Press

Mary F. Calvert, a member of the jury, said of the winning photograph: ‘It was a very very difficult decision, but in the end we felt that the picture of the year was an explosive image that really spoke to the hatred of our times. Every time it came on the screen you almost had to move back because it’s such an explosive image and we really felt that it epitomises the definition of what the World Press Photo of the Year is and means.’

Since 1955, the annual competition ‘rewards photographers for the best single-exposure pictures contributing to the past year of visual journalism’. This year’s compelling line-up of images by 45 photographers from 25 countries all capture the turbulent, traumatic and devastating events from around the world. Selected by a jury of professionals from the fields of photojournalism and documentary photography the winners of the 60th annual photo contest will go on public view at several exhibitions around the world.

As the intention of the World Press Photo Foundation is to ignite debate around these issues, we’ve chosen just a few of this year’s winners below.

Jonathan Bachman captured lone activist Ieshia Evans as she offered her hands for arrest, as riot police charge her during a protest against police brutality outside the Baton Rouge Police Department in Louisiana, USA, on July 9, 2016. 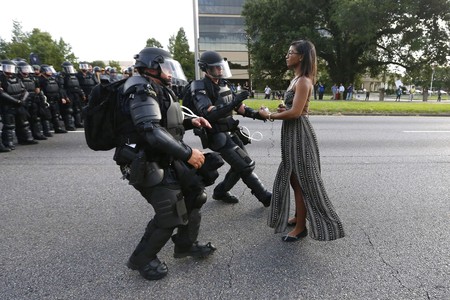 Francis Pérez highlights the vulnerability of sea turtles with this upsetting image of one entangled in a fishing net off the coast of Tenerife, Canary Islands. 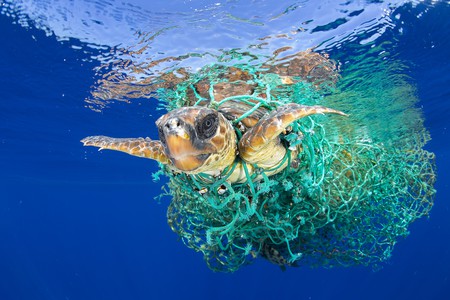 Two crying Nigerian refugees are caught on film by Daniel Etter at a detention centre for refugees in Surman, Libya, on August 17, 2016. Attempting to reach Europe, Etter highlights the epidemic of hundreds of women escaping precarious and violent conditions. 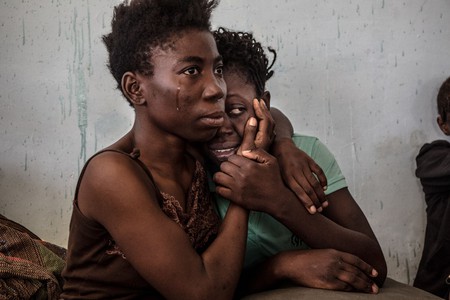 Bauza was awarded third place for his series about homelessness in Brazil that centres around Copacabana Palace, an ironically-named group of condominiums in Brazil that houses more than 300 homeless families. It’s estimated there are 1.8 million homeless people in Brazil. 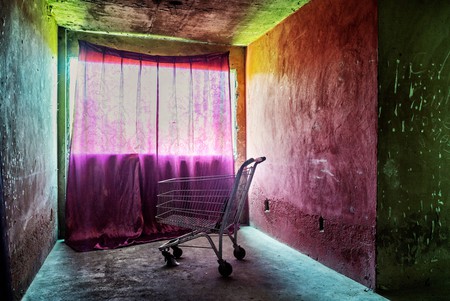 Amber Bracken documented the members of the Standing Rock Sioux tribe as they camped out in opposition to the Dakota Access Pipeline, which crosses their territory and threatens their water supply. Here, a man is treated with milk of magnesia after being pepper sprayed by police at the blockade on Highway 1806. ‘White people have joined the camps in large numbers, often standing in front of indigenous protesters to shield them with their bodies.’ 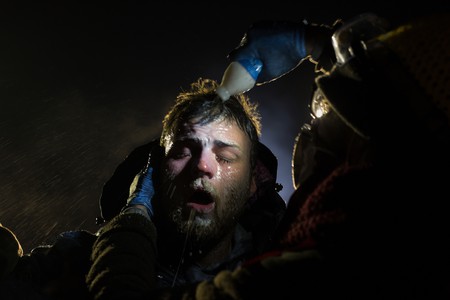 Shot for the New York Times, Tomas Munita captured Cuba‘s days of mourning after Fidel Castro‘s death in December as his ashes were driven throughout the country. Here, members of the Ejercito Juvenil del Trabajo (The Youth Labour Army) wait at dawn for Fidel Castro’s caravan. 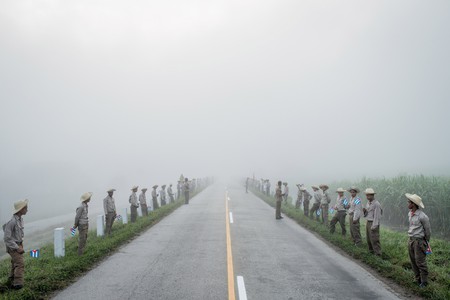 Cuba On The Edge Of Change | © Tomas Munita, for The New York Times

Noel Celis captures the living conditions of Quezon City Jail, one of the Philippines’ most overcrowded prisons. Intended to house 800 inmates, 3,800 prisoners take turns to sleep on the steps of stairs. 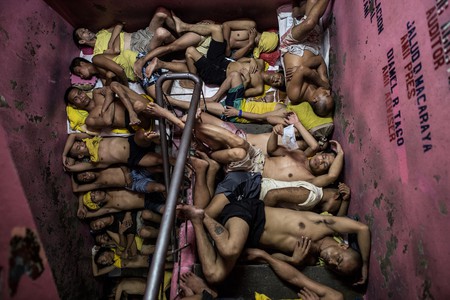 Valery Melnikov’s project about the conflict in Ukraine emphasise how ordinary people become involved in the military confrontation against their will; loosing family, friends and their homes. Here, a man inspects a damaged building in the Mirny district of Luhansk. 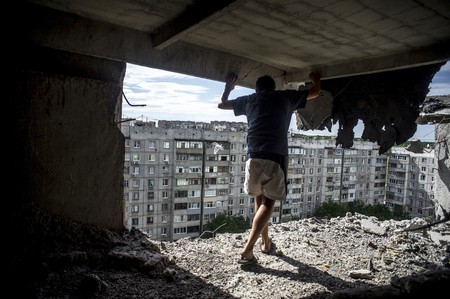 Recently taken off the endangered species list, the giant panda has become a symbol of much-needed conservation. For the past 25 years, the Chinese have worked on protecting habitat and growing the declining panda population. Ami Vitale’s beautiful series documented the conservation centre in Wolong Nature Reserve for the National Geographic. Here, Ye Ye, a 16-year-old giant panda, lounges in the wild enclosure at the reserve. 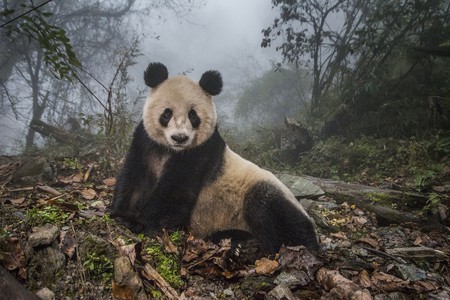 Another winning image from a New York Times story about the crack down on drugs in the Philippines, Daniel Berehulak’s powerful photograph shows inmates at a police station in Manila watching as drug suspects are being processed. 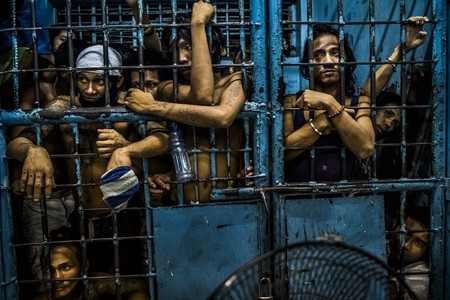 They Are Slaughtering Us Like Animals | © Daniel Berehulak, for The New York Times

Photojournalist Santi Palacios makes the unimaginable situation of displaced orphaned children devastatingly real with his photograph of a Nigerian brother and sister on board an NGO rescue boat children after their mother died in Libya. 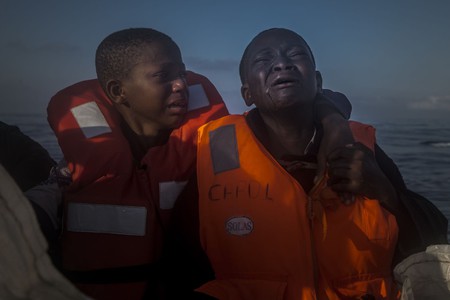 Italian photographer, Francesco Comello documented the inhabitants of a secluded Russian community founded in the 1990s by an Orthodox priest. Referred to as ‘Isle of Salvation’, the spiritual centre accommodates those regarded as social outcasts. 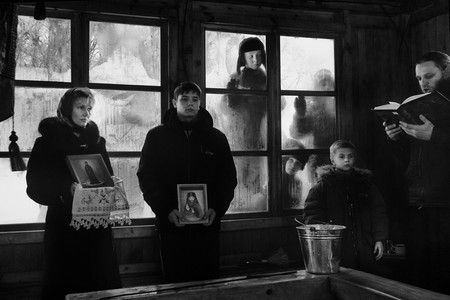