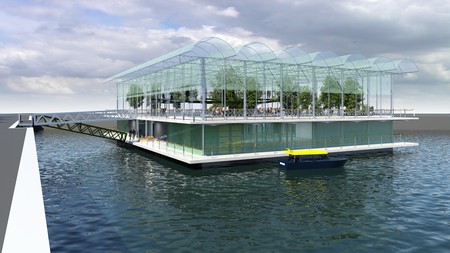 An offshore dairy farm, anchored in Rotterdam’s harbour, will soon begin producing milk for the city. Developed with sustainability in mind, the project will generate less carbon emissions than farms built on dry land and make it easier for residents of Rotterdam to purchase fresh, locally-sourced dairy products on a daily basis.

Named the Floating Farm, the waterborne project will house 40 Montbéliarde dairy cows, known to produce around 25 litres of milk per day. Rather than using manual labour, it will rely on high-tech robots to milk its cows, which are designed to make the whole process as comfortable and humane as possible. Spread over three levels, the farm is moored to the northern banks of Rotterdam’s Merwehaven docklands, which lies approximately 4.5km away from the city centre, in a neighbourhood called Nieuw-Mathenesse. The project is still under development, but if all goes to plan, the Floating Farm will launch at the end of 2018.

While it might sound rather absurd to move dairy cows offshore, the Floating Farm’s novel approach towards agriculture solves several problems at once. First and foremost, the project avoids contributing to one of the major causes of pollution within the dairy industry: transportation. As it is located inside Rotterdam, the farm can ship its products into the city quickly and efficiently, without relying on additional forms of transport which generate harmful carbon emissions. This means that its products are distributed to consumers almost immediately, allowing residents of Rotterdam to buy fresh milk that’s bottled within eyeshot of their front doors. 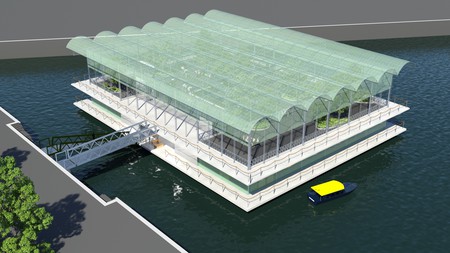 The Floating Farm also repurposes an otherwise empty part of Rotterdam, turning a deserted stretch of water into something useful. Other nearby businesses, including cafés and restaurants, will send waste food to the farm, providing it with around 80% of its cattle feed, and in turn, helping to maintain a self-sustaining circular economy within Rotterdam’s city limits. Although the farm was devised with local needs in mind, it is also meant to pave the way for other similar projects around the world, serving as a working example of sustainable, urban agriculture.

On a global level, the project has many advantages over traditional, terrestrial farms. For one, it doesn’t use any land whatsoever and therefore doesn’t contribute towards environmental issues such as deforestation, outward urban expansion and soil exhaustion in arable areas. It is also designed to endure rising water levels caused by climate change and can cope with potential floods far more effectively than land-based structures.

The Netherlands boasts many other innovative agricultural projects, devised to deal with current and potential issues related to food production, global warming and urbanism. For instance, many modern Dutch farms use state-of-the-art greenhouses to cultivate high yields of crops in confined spaces, which have helped to reduce water and carbon costs significantly over the past 10 years. Partly due to the Dutch farming sector’s commitment to forward-thinking and ecologically-conscious methods, the Netherlands currently exports more agricultural products than any other country on the planet, besides the USA.