The Best Saturday Markets To Visit In Amsterdam

On Saturdays, many neighbourhoods in Amsterdam host large street markets, where local vendors gather together and sell goods ranging from organic produce grown in the Netherlands to second-hand clothing, antiques and souvenirs. Some of these markets have taken place in the same spot for generations, whereas others were established more recently but have already become important parts of their respective neighbourhoods. 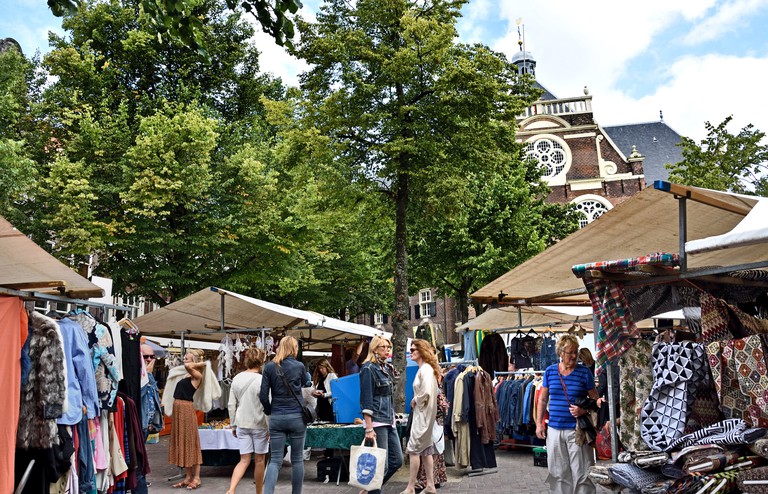 Noordermarkt offers shoppers a variety of goods | © Peter Horree / Alamy Stock Photo
On Saturdays, three connected markets take place on the northwestern banks of Prinsengracht Canal on a triangular plaza that surrounds a 17th-century church called Noorderkerk. These markets have essentially merged into one bumper-sized event known as Noordermarkt, which always features an enormous selection of high-quality organic food, freshly-made street bites and second-hand knick-knacks. The market serves as an important hub for local gourmet food vendors and includes stalls that sell hard-to-find culinary staples like freshly-picked mushrooms and seasonal cheese. There are many charming cafes located nearby, with large terraces that look onto Prinsengracht Canal where visitors can kick back while enjoying the sights and sounds of central Amsterdam. 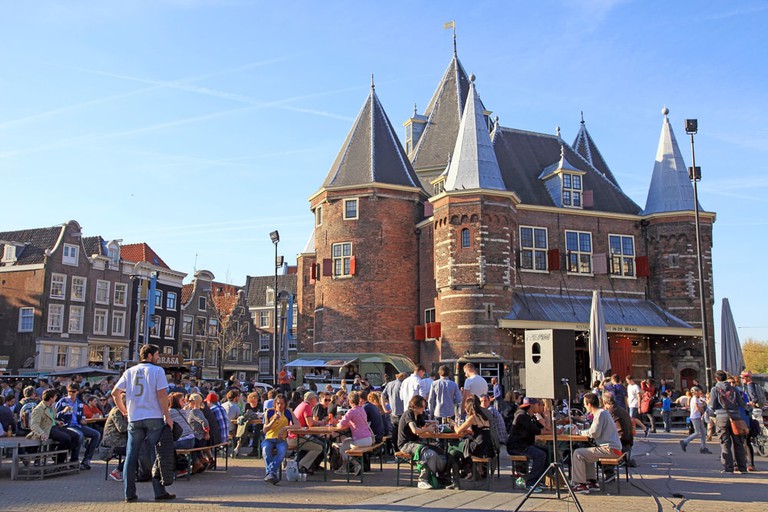 Nieuwmarkt Square in the centre of Amsterdam, Netherlands | © InnaFelker / Shutterstock
Amsterdam’s Nieuwmarkt Square has hosted daily markets since the 17th century and was built near the city’s historic borders in order to facilitate trade between merchants, farmers and sailors. There are still visible reminders of its past located around the square, including a castle-like building called de Waag, which once served as an official customs house. On Saturdays, many artisanal organic food merchants flock to the square to sell their products alongside other culinary professionals who spend their weekends cooking delicious snacks like Dutch-style fries or corn on the cob for passersby.

Rummage for souvenirs at Waterlooplein Markt 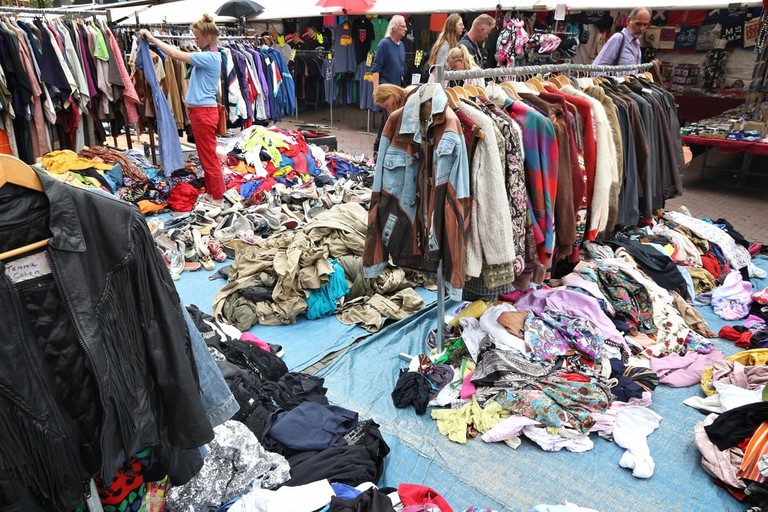 People visit Waterlooplein Market in Amsterdam, Netherlands | © Tupungato / Shutterstock
As its name suggests, this daily flea market takes place on Waterlooplein, near Stopera – a circular, modernist building that houses the National Opera and Amsterdam’s main Town Hall. Although the market appears on the square throughout the week, it becomes slightly livelier on Saturdays and features substantially more stalls. Around a third of the market’s vendors sell second-hand clothing and often arrange their wares on long clothing racks or place them on the ground in large heaps. There are many other stalls at the market dedicated to specific products, including novelty t-shirts, typical Dutch souvenirs and second-hand bicycles. 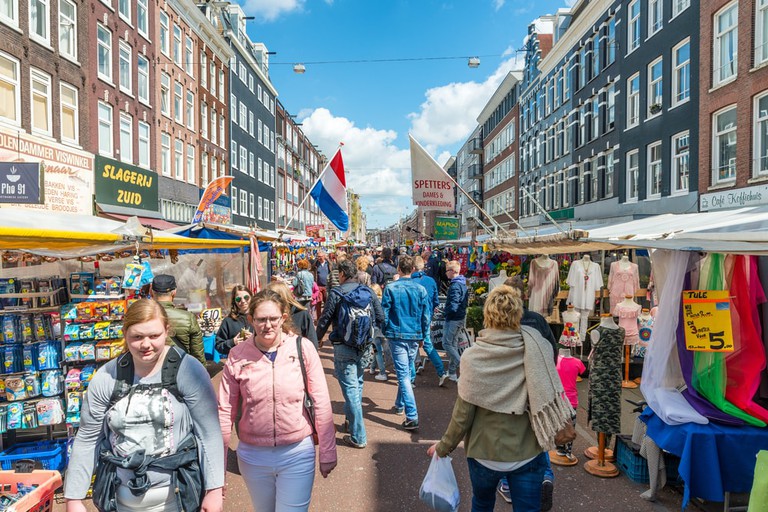 The Albert Cuyp Market is open six days a week | © Prasit Rodphan / Shutterstock
Albert Cuypmarkt has played an important role in Amsterdam’s daily life for over a century and ranks among the largest markets of its kind in the world. Each day (except Sunday) dozens of local merchants assemble stalls at the market and then, hawk their wares from the morning until the late afternoon. The market runs through the middle of a southernly neighbourhood called de Pijp, which is renowned for its charming 19th-century architecture and diverse culinary scene. Many stalls at Albert Cuypmarkt actually back onto larger brick-and-mortar stores that sell everything from luxury antique furniture to made-to-order flower bouquets.

Hunt for vintage treasures at IJ-Hallen 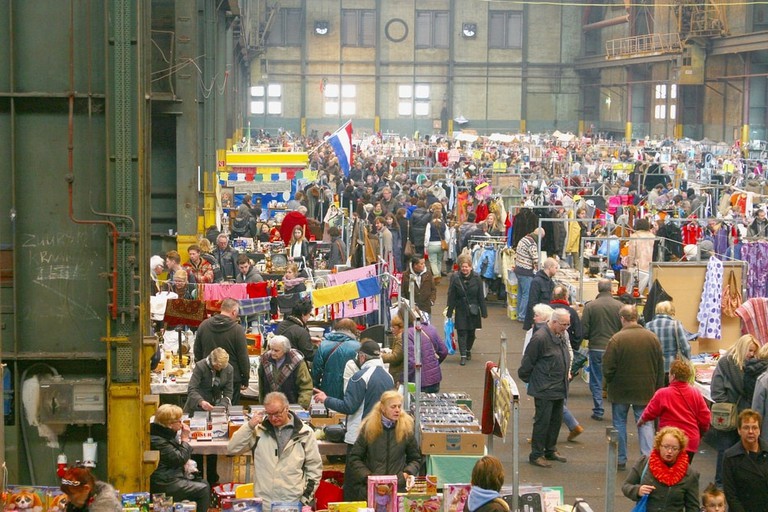 During one weekend of every month, Amsterdam’s industrial NDSM Wharf hosts IJ-Hallen, the largest flea market in the Netherlands. This huge event takes place inside two former shipping warehouses and spills out onto a nearby plaza. Due to its size and the enormous variety of goods on sale at the market, it is easy enough to spend an entire afternoon rummaging through IJ-Hallen’s many stalls. While many professional merchants rent out spots at IJ-Hallen every month, people also attend the market in order to sell old, unwanted items like furniture, clothing or bicycles that are taking up space in their apartments. It is always worth withdrawing cash before entering IJ-Hallen as most vendors don’t accept credit cards and there are usually long queues for the ATMs located on-site. 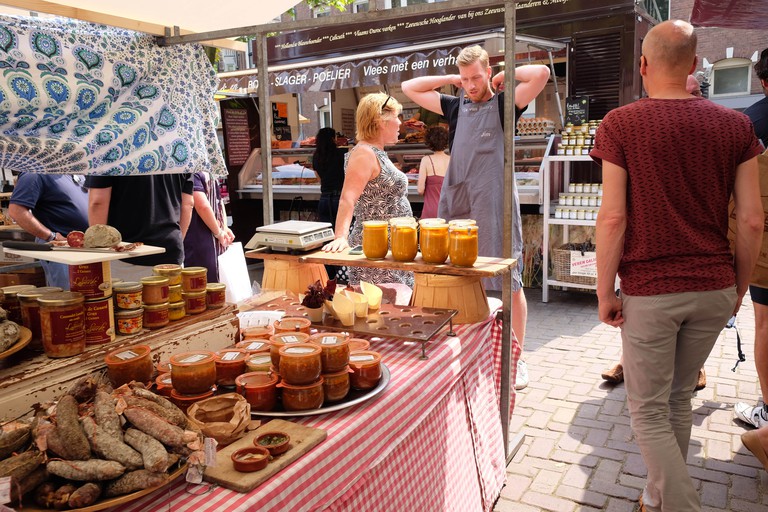 Food stalls at ZuiderMRKT | © Franklin Heijnen / Flickr
Every Saturday from 9:30 am to 5 pm, around 20 local food specialists man stalls on a small plaza that lies 200 metres west of Museumplein. This event is known as ZuiderMRKT, due to its location in Amsterdam-Zuid, and always features an impressive variety of delicious artisanal products ranging from freshly baked bread to high-quality cuts of meat. The market’s selection changes according to the season and mainly centres around sustainable, eco-friendly products that are farmed or made in the Netherlands.