Luxury Hotels in Amsterdam for an Upscale Stay 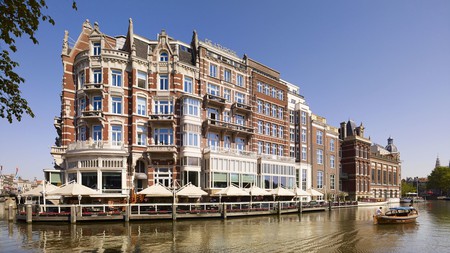 For centuries, Amsterdam has drawn an upscale crowd to its cobblestone streets. It’s home to some of the Western world’s greatest art collections, and in recent years, hip bars and avant-garde restaurants. Elevate your stay in the Dutch capital with a stay in one of these five-star hotels. 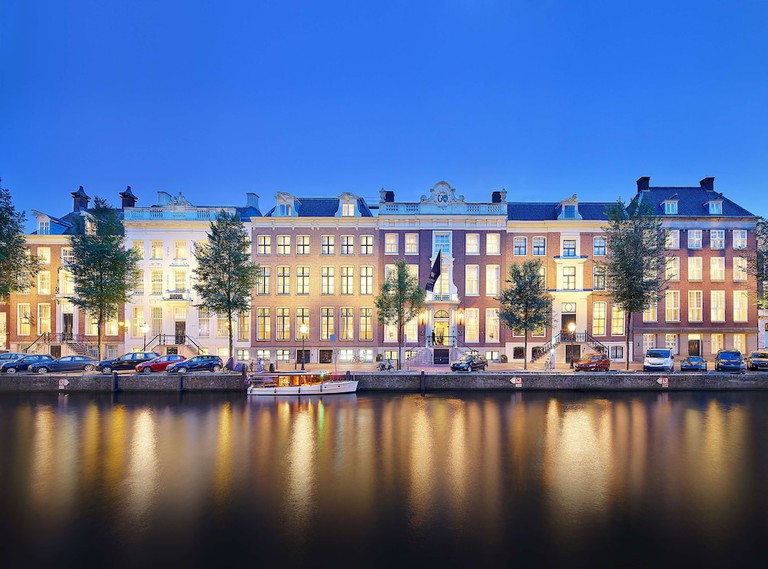 The Waldorf Astoria Amsterdam is known for its remarkable two-Michelin-star restaurant, creative afternoon teas and a luxurious spa with some of the finest facials in town. Situated in six 17th-century double-front canal palaces on Amsterdam’s Herengracht, the hotel embodies understated elegance and offers canal or courtyard views from its rooms. If you’re looking to be pampered in the historical centre of Amsterdam, it doesn’t get better than this. 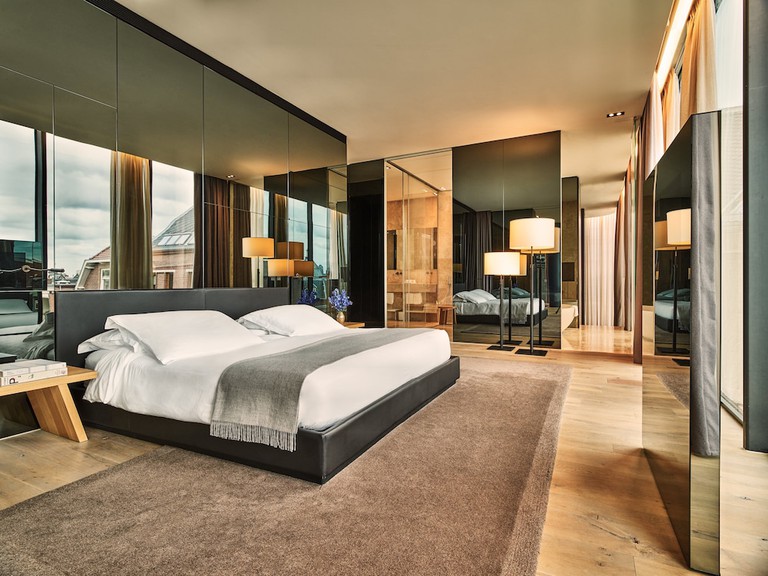 The Conservatorium, named after the music conservatory once housed here, was the first property in The Set Hotels portfolio. The company is now responsible for a trio of Europe’s “modern grand hotels”, including Hotel Café Royal in London and Hotel Lutetia in Paris. Conservatorium’s convenient location in the chic Zuid district – right by Amsterdam’s “big three” museums – is a selling point, as is Italian interior architect Piero Lissoni’s sleek redesign of the 19th-century bank building. It’s also home to an excellent underground spa. It’s not surprising that the style set continue to flock here. 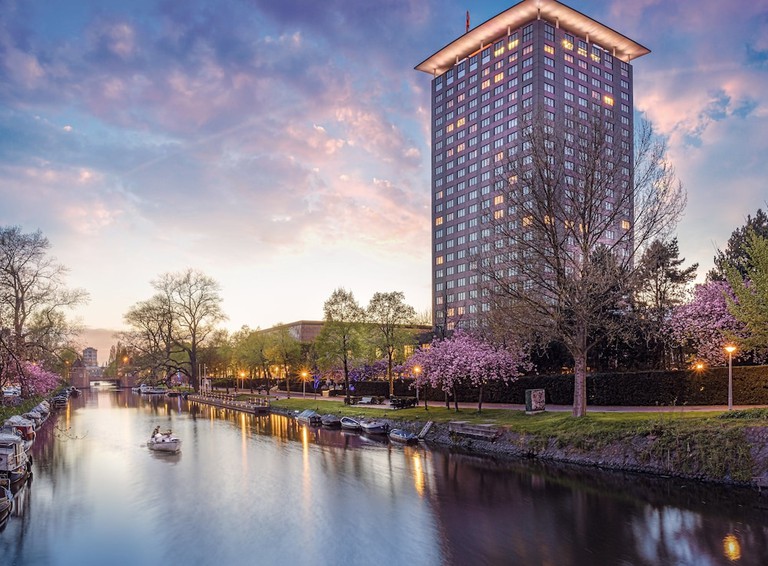 Hotel Okura showcases a blend of Eastern and Western influences in its decor and services | Courtesy of Hotel Okura Amsterdam / Hotels.com
View Rooms

This Japanese-owned hotel offers outstanding luxury with an Asian twist in Amsterdam. Here, you can go for a glass of champagne 23 floors up, linger over a meal at one of the hotel’s Michelin-star restaurants or stay and wake up to panoramic city views in one of the city’s tallest hotels. Perched on the outskirts of De Pijp, the hotel has a calming feel enhanced by its serene setting and subdued decor. It also has a restful spa, which offers Eastern- and Western-style treatments. 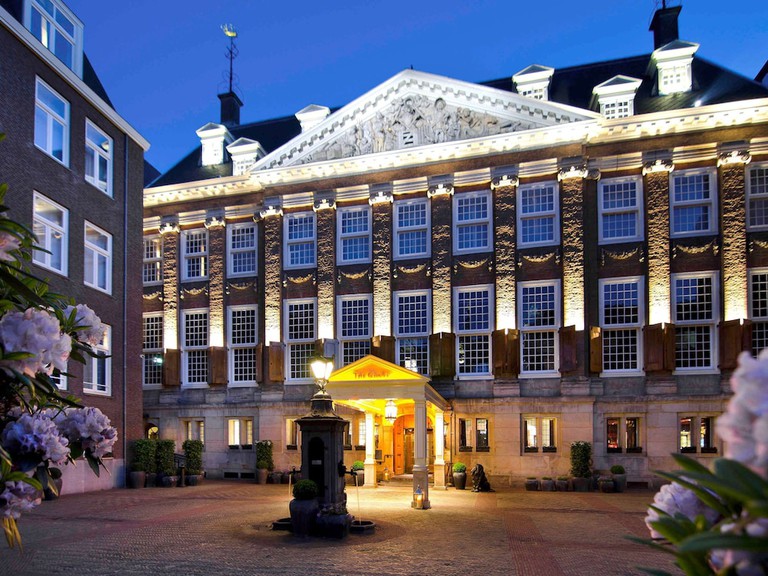 A genuinely historic Amsterdam hotel, The Grand truly lives up to its name. It was founded as a convent in the 15th century and is famous for being the location of the former Queen Beatrix’s wedding. It has also seen more than its fair share of well-known visitors, from William of Orange to Winston Churchill. Classic and charmingly Dutch, with views of Amsterdam’s oldest canal, the hotel features modern art that contrasts with its centuries-old architecture. The hotel’s extravagant breakfast is another highlight. 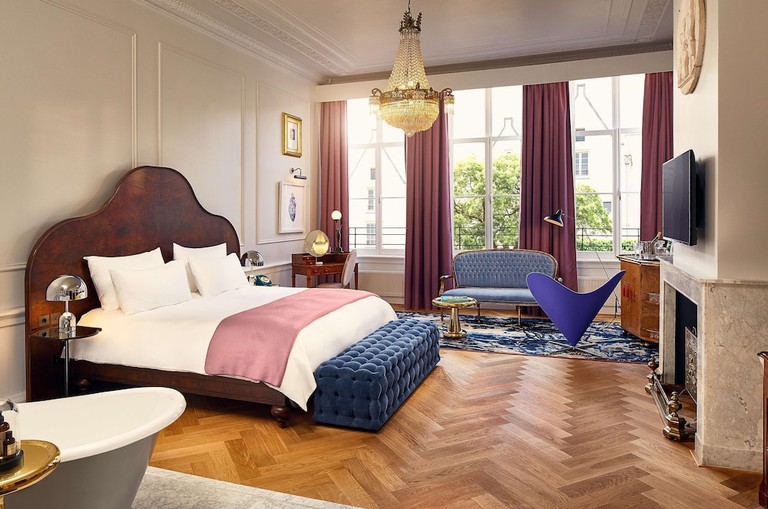 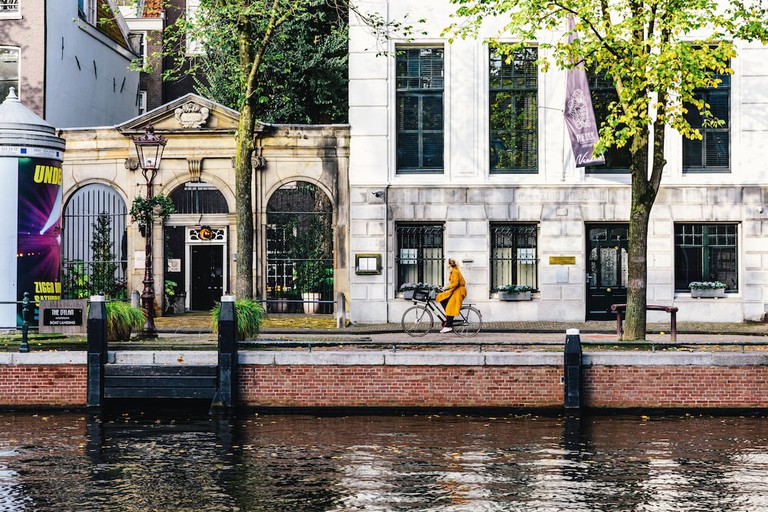 The Dylan lies on the Keizersgracht canal | Courtesy of The Dylan Amsterdam / Hotels.com
View Rooms

The Dylan Amsterdam is as lovely inside as it is at first glance through its original Golden Age gates. While it’s now home to 40 individually designed rooms and suites, a theatre where Antonio Vivaldi conducted the orchestra once stood on this site. Book a table at the onsite Michelin-star restaurant. The Keizersgracht location makes this a handy address for those wanting to explore the tourist trail. You’re on the grandest canal at the heart of the Grachtengordel, near the 9 Streets and Jordaan districts. 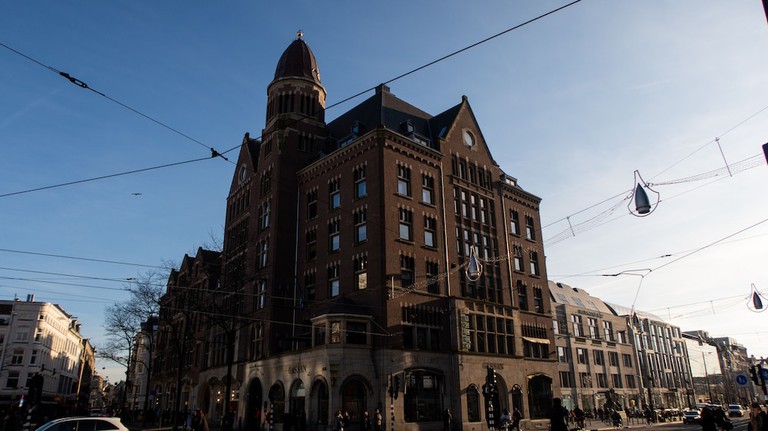 If your definition of hotel luxury is a little over the top, with decadent interiors, an impossibly central location right on Dam Square and a ridiculously high price tag to match, you’re at the right address. The suites here couldn’t be more opulent, with rich silks and velvets, copper-threaded wallpaper and voluptuous sofas. Inside the rooms, expect Roman-style bathrooms with double-size steam showers and Japanese toilets. However, the personal butler service is the true selling point of Hotel TwentySeven. The staff are professional, polite to a fault and more than happy to go the extra mile. 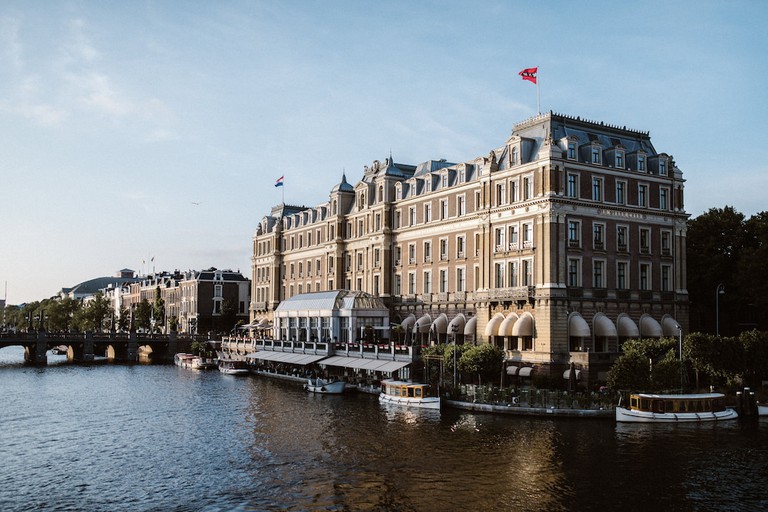 This stately hotel has been an Amsterdam icon ever since its opening over 150 years ago. It’s favoured by Dutch and Hollywood royalty alike for its legendary service. Large classically furnished rooms and ‘little extras’ (such as private tours on 100-year-old saloon boats) are just a few of the highlights. Whether you choose to take the hotel’s celebrated afternoon tea or dive into its indoor swimming pool, you can do so while enjoying unparalleled river views. 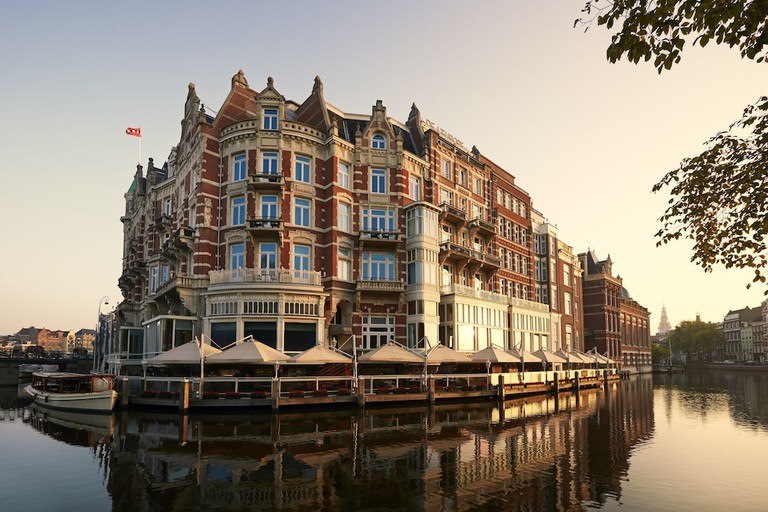 Since the old days when it was part of the Grand Tour, the 123-year-old De L’Europe has epitomised Amsterdam luxury. Here, you’ll have all of your culinary whims met at the Michelin-star restaurant, brasserie or bar. Alternatively, treat yourself to some ‘me’ time at the tranquil spa. Upgrade to the Penthouse Suite if you really want to splash out – it comes with a private canalside terrace and an extra large marble bathtub. 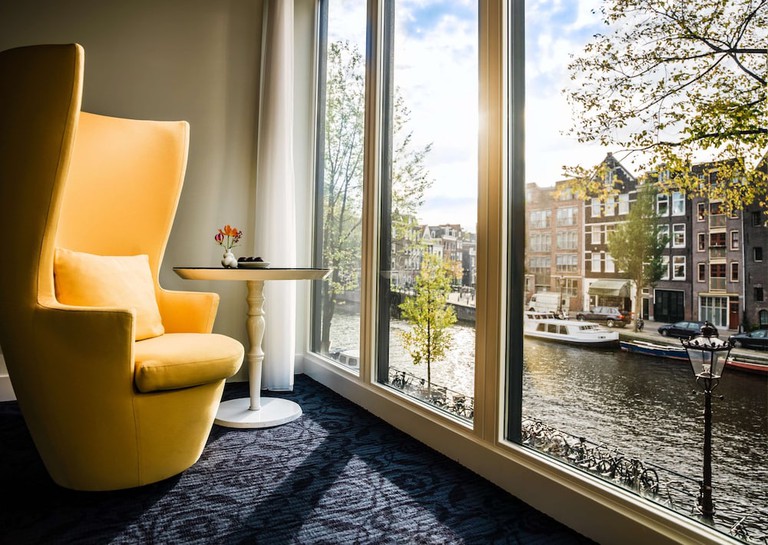 Courtesy of Andaz Amsterdam / Hotels.com
View Rooms
A short walk from the charming Nine Streets district, and perched above canals, Andaz Amsterdam Prinsengracht is an opulent retreat. Each of the guest rooms have lively individual design and feature views across either the nearby Prinsengracht canal, the ‘secret’ hotel garden or the striking observatory-inspired atrium. Andaz has a host of welcome amenities, too, including 24-hour room service, a dedicated concierge team, and even a limousine service on request should you want to see the city in style.
More info 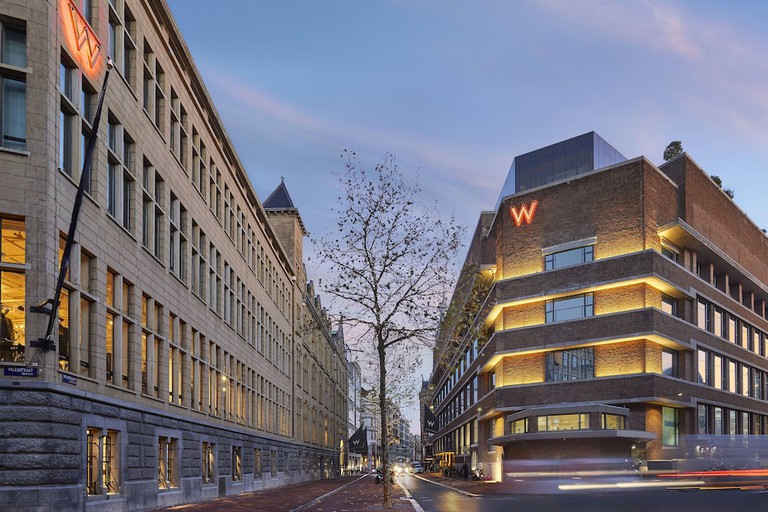 W Amsterdam | Courtesy of Hotels.com
View Rooms
Creatively designed, the W Amsterdam is one hotel split across two buildings, each offering a different but equally enjoyable stay. Part of the Marriott group, it has guest rooms offering the same sleek interiors, modern amenities and personable service that has made the brand, while still offering an individual experience due to the unique layout and in-house cultural programme. Look out for the exclusive events, dubbed the W Happenings, held in the W Lounge and the WET DECK rooftop pool – they’re some of the best parties in the city.
More info

View Rooms
The Amsterdam edition of the Soho House group of private members’ clubs, restaurants and hotels overlooks the serene Singel canal and has distinctive art deco interiors. It has everything you might need for a stay in the city: dedicated work spaces, expert mixologists working a fully stocked bar, and an excellent day spa offering massages, therapies and treatments. One of the true highlights is the rooftop pool, with sunbeds, a bar and unparalleled views across the gorgeous cityscape.
More info 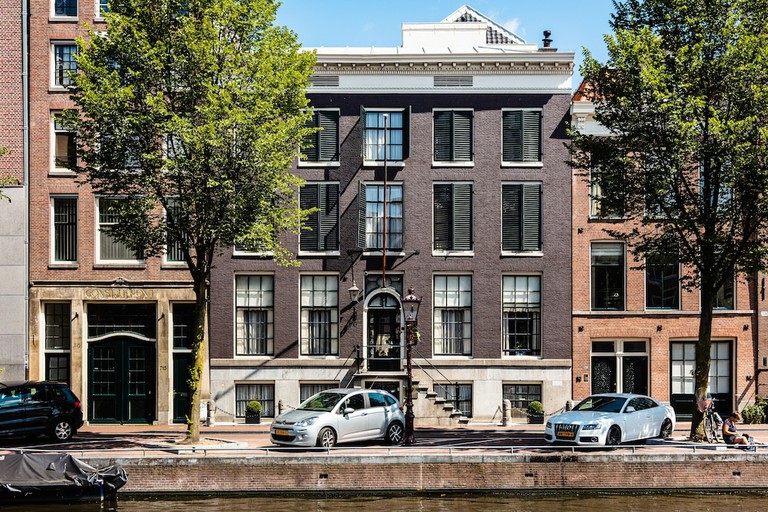 Courtesy of Hotel Seven One Seven / Hotels.com
View Rooms
With 19th-century origins, the five-star Seven One Seven is old-world charm with contemporary conveniences. Each of the nine luxury suites come with design inspired by master creatives (room names include Shakespeare and Tolkien, Schubert and Picasso) while still featuring modern amenities such as walk-in rain showers and ultra-comfortable English box-spring mattresses. The concierge service will book you next-level experiences, too, including a personalised walking tour and private cruises down the picturesque canals.
More info 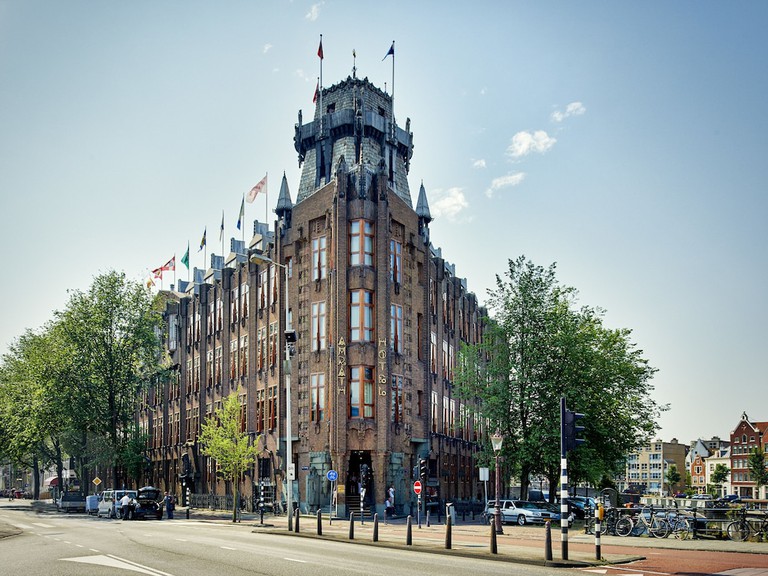 Courtesy of Grand Hotel Amrâth Amsterdam / Hotels.com
View Rooms
Built into a former shipping house, the Grand Hotel Amrath offers a traditional five-star experience in the heart of the city. Each of the 200 guest rooms offer a taste of grandeur, with high ceilings and an Amsterdam School design (an offshoot of art nouveau, art deco and expressionist styles). A stone’s throw from Amsterdam Centraal station, it’s the ideal choice if you want to explore everything this historic city has to offer.
More info