The Best Restaurants In Haarlem In The Netherlands 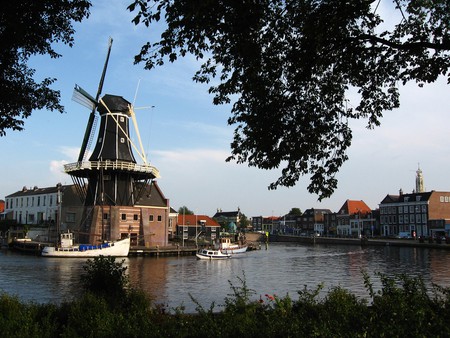 If you’re planning to visit Haarlem on your next trip to the Netherlands, make sure to read up on the city’s booming culinary culture. Its proximity to the sea, and Noord-Holland‘s fertile farmlands, means that food in Haarlem is unbelievably fresh and delicious. To help you on your way, we’ve compiled a list of Haarlem’s best restaurants.

This delightfully urbane bistro has honed its menu to perfection and uses modest, simple ingredients to create outstanding meals that are inspired by French cuisine. Its signature dishes are based on refined, provincial recipes that flawlessly balance a range of delicate flavors. Its inviting dining room is extremely romantic and looks onto the restaurant’s open kitchen. Toujours’ wine card is amazing. They stock bottles from several French regions.

Specktakel’s kitchen has gathered an extensive selection of cross-continental delicacies that includes dishes from South Africa, Tuscany, China, France and Indonesia. This mouthwatering pastiche is infused with exotic, as well as familiar, flavors that form a delicious, finely tuned menu. Specktakel’s owners are keen wine collectors and serve an outstanding range of bottles from new and old world producers.

El Pincho is a tapas restaurant that adds some spicy South American flavors to one of Spain’s most famous exports. Its menu is divided into three sections that contain seafood, meat or vegetarian dishes, and El Pincho encourages its guests to share small platters among a group of friends. The restaurant also has a solid cocktail menu and can whip up a batch of fresh margaritas in a matter of minutes.

Wilma & Albert’s Steakhouse brings a slice of Americana to Haarlem’s colorful city center. All of the meat is cooked on flaming hot charcoal grills and packed with smokey, BBQ flavours. Wilma & Albert’s have been flipping burgers and searing steaks since 1971 and the restaurant is among Haarlem’s oldest eateries. Classics like surf and turf, sirloin steaks and lamb chops are all available, alongside several specialties that draw from Dutch cuisine.

Metzo’s menu offers modern takes on Mediterranean classics. The restaurant is spread over three spacious levels that overlook a narrow alley in Haarlem’s historic center. Its interior is modern, elegant and welcoming and Metzo’s service staff are exceptionally friendly. Dinner at Metzo revolves around locally sourced meat, fish and vegetables, and its kitchen regularly buys game birds from hunters based in Haarlem.

De Lachende Javaan doubles up as a cultural space dedicated to Southeast Asian artwork. The restaurant contains several colossal statues that have been imported from Java, and its menu reflects its devotion to the island’s history. The kitchen cooks up a variety of traditional Javanese meals including numerous Gado Gado salads that are equally appealing to carnivores or vegetarians. Spicy saté is also on the menu and can be eaten with chicken, lamb or prawn kebabs.

The Jopenkerk is parts of Haarlem’s Jopen brewery and uses the company’s signature blond beer in several of its dishes. The head chef prepares a weekly stew that is laced with this delicious lager and served up with generous portions of fried potatoes. The menu also contains freshly caught fish and an enormous French steak. After dinner guests can head over to Jopen’s grand café and sample amazing beers straight from the barrel.

Supping #ale outside a brewery that used to be a church in a pretty Dutch city with my lovely wife. Life doesn't get much better that this.