The Best Bars In Haarlem In The Netherlands 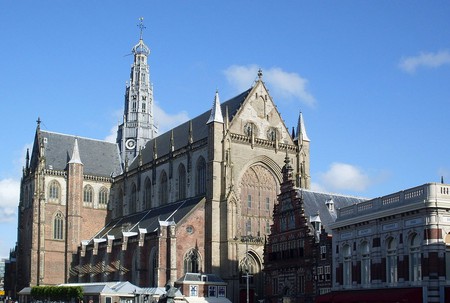 Fancy sampling some local drinks on your next trip to Haarlem? Or are you eager to discover the city’s unique nightlife? We’ve got you covered with the following list of bars, taprooms and cafés in this wonderful Medieval city.

Jopen is Haarlem’s leading craft brewer and has been creating delicious ale since the early the 1990s. Its main site is located inside an ancient church that has been adapted into a large brewery, restaurant and bar. All of Jopen’s seasonal beers are available straight from the barrel and can be enjoyed alongside a wide selection of Dutch snacks. The church also contains an amazing museum that traces the history of Haarlem’s master brewers.

Brewery in a church.

Stradstrand de Oerkkap has converted an old, industrial complex into a beautiful artificial beach that overlooks Haarlem’s canal ring. This cosy bar cooks up BBQ food and fried snacks on its waterside terrace and has built a massive gazebo to deal with the Netherlands’ notoriously fickle weather patterns. The beach is also equipped with several blazing fires that keep guests toasty during the colder months.

After nightfall this chic bar transforms into an intimate club that plays music well into the early morning. XO usually employs local DJ’s making it a great place to experience Haarlem’s growing nightlife. The bar has several beers from the city’s leading brewers, along with a fantastic selection of gin and tonics. Its main dance floor and function room can be hired for private events or parties.

Find places to stay in Haarlem with our partner, Hotels.com

As its name suggests, The Louisiana is inspired by the Cajun state’s music, culture and cuisine. The bar plays southern jazz, blues and country music most nights of the week and regularly invites local musicians to play live sets. The team behind the Louisiana is dedicated to American mixology and can whip up the most irresistible whiskey cocktails. The bar also stocks an amazing range of bourbons and tequila from south of the Dixie line.

This charmingly rustic pub serves a rotating selection of local beers and keeps an impressive supply of international liquors. Its interior is lined with aeronautical antiques and is designed to resemble a typical brown bar complete with tanned wooden decor. The pub puts on live jazz nights twice a month that attract hundreds of locals.

The Uiltje brewery is a newcomer to the Netherlands’ booming craft brewing scene and opened this friendly bar in 2015. The brewery adds some modern twists to classic methods and creates beers that mix up traditional recipes. All of Uiltje’s wares are available from the bar and its taps are changed each season. The interior is deliberately modest and contains a huge taproom with a large red-brick seating area.

Although Café Wilsons has exchanged hands over the years it has remained outstandingly welcoming. The café has been providing a space for Haarlem’s gay community for 36 years and continues to host amazing parties every weekend. There’s plenty of beer on tap, and Wilsons’ bar staff can make some amazing shots including a multicolored vodka laced concoction you have to try.

Find places to stay in Haarlem with our partner, Hotels.com