The Best Cocktail Bars in Amsterdam 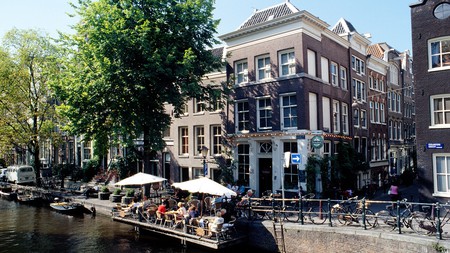 If you find yourself in Amsterdam with a thirst for a cocktail, you’re in luck. The city is home to a whole host of bars helmed by some of the most talented mixologists around.

If you’re heading to Amsterdam, try to look beyond the city’s tropes – like stag parties in the Red-Light District – because there is another lesser-known side to the city. The city is rich in culture, with a number of museums to explore and job opportunities galore for creative types. To accommodate this clientele, it’s chock-full of classy cocktail bars, including speakeasy Door 74 and the James Bond-themed Vesper.

With its cloak-and-dagger booking process and Prohibition-style decor, this speakeasy bar has gained some firm fans. It’s not cheap, so we suggest heading here for a nightcap. Having said that, the cost is worth it for the expert cocktails created by a team headed up by Timo Janse, who has bartended for over 15 years and made over 600,000 cocktails during his career. The menu is wonderfully crafted and meticulously detailed, but at 12 pages long it’s worth taking recommendations from the bar staff. It also features a handy key to illustrate the type of glass each cocktail comes in and its strength, so you have some idea of what you’re getting.

Nestled in the Jordaan, a 20-minute stroll from the Rijksmuseum, the clandestine entrance of this speakeasy is hard to spot. Once you’ve tracked it down, knock on the door and wait to be let in. Walking inside is like stepping back in time; the cosy two-storey bar is all velvet furnishings and dark wood. Bar Oldenhof offers table service, but if you ask to be sat at the bar you’ll be served by the bartenders while you watch them conjure up cocktails with the flair of magicians. The menu is a solid mix of classics and signature house cocktails that ensure you’ll have the comfort of an old favourite or the joy of finding something new. 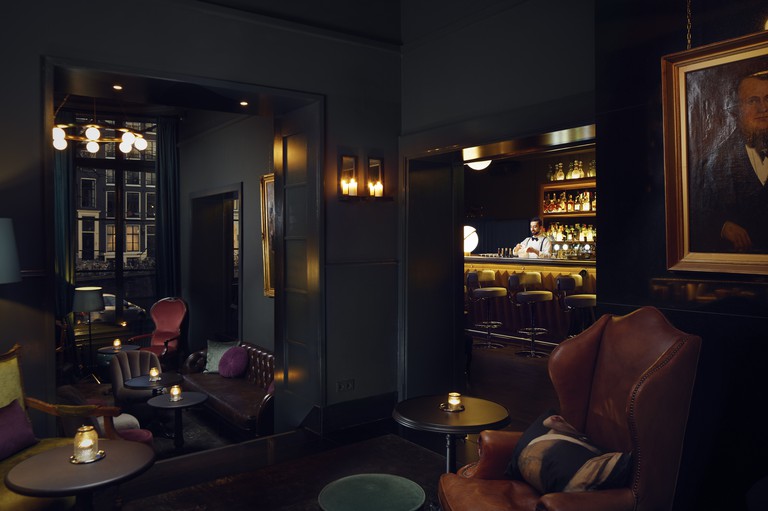 Housed in the five-star Pulitzer Hotel is this Art Deco-inspired, award-winning bar that overlooks one of the city’s many canals. The current theme for the cocktail menu is Ernest Hemingway. If you like rose flavours, try the fruity-floral Love Letter Cobbler – it’s a real crowd-pleaser. Skilled mixologists are able to whip up old classics and can even tailor a cocktail to your taste, if you ask nicely enough. The snack menu has been expertly crafted to complement the drinks and whet your appetite for dinner. Pulitzer Bar is not cheap, but it’s a good choice for a special occasion, and all guests must be seated, so even when the bar is full it never feels crowded.

The relatively new Super Lyan is a hop and a skip from Centraal station, but don’t let its tourist-heavy locale fool you – this bar has true style. The name may be familiar to cocktail aficionados as this is the first Amsterdam-based bar from Ryan Chetiyawardana, better known as Mr Lyan, and the team who brought you New York’s White Lyan and London’s Dandelyan. Neon lights and bold paintwork juxtapose the original 17th-century features. All the cocktails are given a Lyan twist, and the frosé margarita is as pretty as it is quaffable. There are some very enticing booze-less options, too. Bar snacks include padrón peppers, retro devilled eggs and classic Dutch bitterballen. You could easily while away a good few hours at this all-day bar. 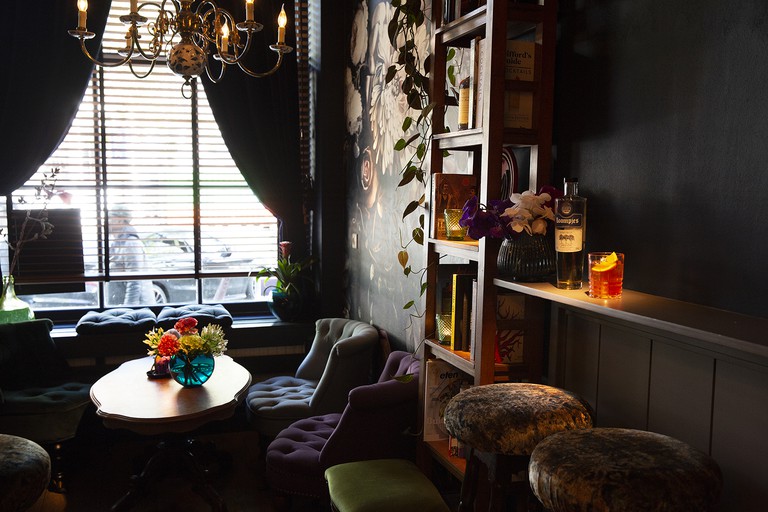 At Rosalia’s Menagerie, situated in the heart of the city, you’ll find an experimental cocktail menu that changes seasonally. Its name and decor take inspiration from a time when sailors would settle bar tabs with curiosities gathered from far-flung places during their time at sea. This seated-only bar is the ideal place to enjoy some much-needed peace and quiet away from Amsterdam’s bustling streets. As well as themed cocktails, you’ll find classics with a house twist and old favourites from previous seasonal menus, while off-menu cocktail requests are welcomed (providing the ingredients are available). Snacks such as olives, hummus and bitterballen are available if you’re feeling peckish.

Hiding in Plain Sight (or HPS, for short) is discreetly situated on a corner, not far from the glare of the Red-Light District. The cocktails are notoriously strong, and the bar area is intimate with comfortable chesterfields dotted throughout. The bartenders are dressed in smart waistcoats, and the place has a retro yet quirky feel. Cocktails are served with complimentary popcorn and olives, while pasta masquerades as straws (a clever solution to the plastic crisis). Head here for a classic old fashioned or bloody mary, or try the Walking Dead, a flaming, sharing cocktail served in a skull-shape glass. 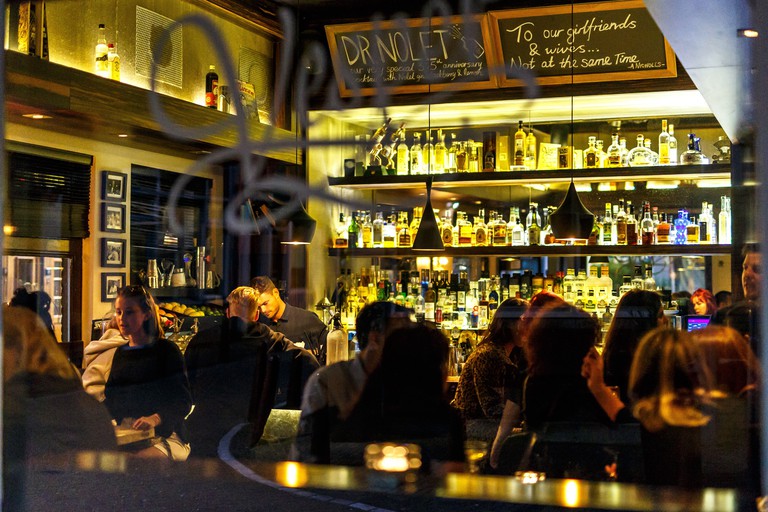 Did you know the vesper was a cocktail invented by Casino Royale’s author, Ian Fleming? It’s also the inspiration for the name of this bar, which is decked in 007 memorabilia. You don’t have to be a Bond fan to drink at this centrally located bar; it is a great place to head to with a group of friends. Celebrating a special occasion? Vesper offers private two-hour cocktail workshops for groups of six to 20 people. While you would be remiss not to try a vesper martini, classics are available on request and the menu is constantly changing, updated with new inventions crafted by the knowledgeable bar staff.

Bar, Cocktail Bar, Cocktails, $$$
Facebook
Email
Twitter
Pinterest
Copy link
Share
Map View
Tales & Spirits’ decor is more akin to that of a traditional, low-key, Dutch brown bar. The cocktail menu doesn’t take itself too seriously, which is probably why the house rules ban babies, children and pets, due to the use of open flames, dry ice, smoking guns and “other fun stuff”. Try the Roald Dahl-inspired Gobblefunk with bourbon, earl grey, fresh lemon and ‘crodscollop’ puree, which the bar states is only for “human beans and the occasional Oompa Loompa”. Don’t fret if you’re a fan of the classics, though. The menu is jam-packed with them – there’s even an entire section dedicated to the old fashioned.
Open In Google Maps
5-7 Lijnbaanssteeg, Amsterdam-Centrum Amsterdam, Noord-Holland, 1012 TE, The Netherlands
+31655356467
Visit Website
Give us feedback 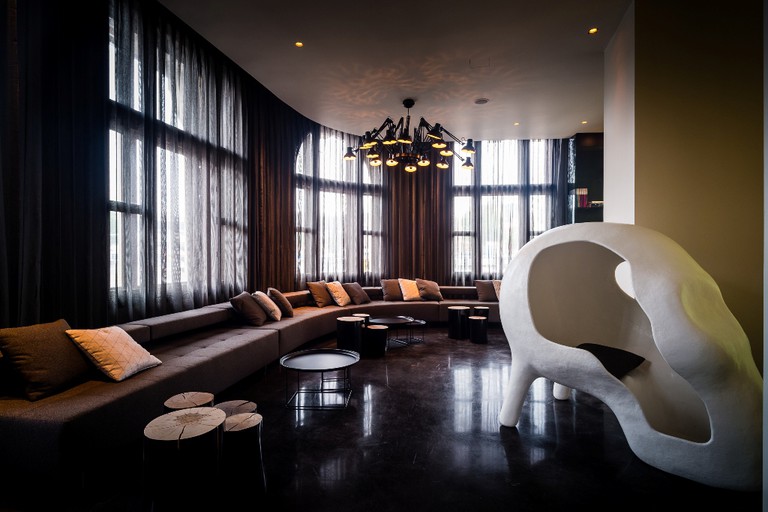 5and33 has regular DJ sets | Courtesy of 5and33
The cocktail bar 5&33 is housed in Amsterdam’s art’otel, opposite Centraal station, which features work by Dutch modern contemporary sculptor Joep van Lieshout. The lounge bar has regular live DJ sets, making it a good place to kick-start your night out. Alongside classic cocktails, you’ll find signatures to try, including Nights in Amsterdam – a sweet combination of gin, Aperol, vanilla and chocolate bitters. The bar snacks have a Mediterranean flavour – iberico ham, anchovies and green olives, to name a few.
Open In Google Maps
5 Martelaarsgracht, Amsterdam-Centrum Amsterdam, Noord-Holland, 1012 TN, The Netherlands
+31208205333
Visit Website
Give us feedback