The 10 Most Important Old Masters in Dutch Painting

From stunning originals like Hieronymus Bosch through to the Dutch Golden Age of the 1650s, The Netherlands produced countless masterpieces across every category of painting. Most are familiar with towering figures like Rembrandt or Vermeer, but there is more to an art movement than two figures. From an internationally successful woman to Dürer’s great Dutch rival, the country has so much to offer art fans. Explore Holland with our guide to its best Old Masters.

Perhaps the greatest and most famous portrait painter of all time, Rembrandt van Rijn was a master of observation, chiaroscuro and, perhaps most importantly, brutal honesty, as seen in his most famous works, the self-portraits. Critics and scholars disagree over how many he undertook, but whatever the actual number, it is a staggering collection including approximately 45 paintings, 30 etchings and seven drawings. These depict the ravages of time on the artist’s face without any sense of vanity, and are heartbreaking if seen in succession. His Biblical scenes and etchings are also superb, but it is those portraits that are his legacy. 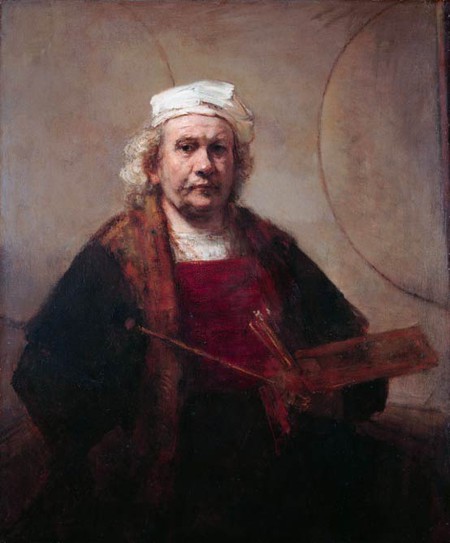 Virtually ignored in his own time, Vermeer is now truly considered an Old Master. Like many from the Golden Age of Dutch Painting, Vermeer’s fascination was light, and the faithful and beautiful reproduction of it on canvas. This can best be seen on his most famous work Girl With a Pearl Earring, in which the interplay of light upon the various fabrics and the wonderful reflection shining on that pearl earring make it one of the masterpieces of western art. Using the camera obscura that became available in the Netherlands in the mid-17th century, Vermeer’s best works generally feature windows, and Vermeer would use his new tool to depict the light shining through them in ways never before seen in his time. 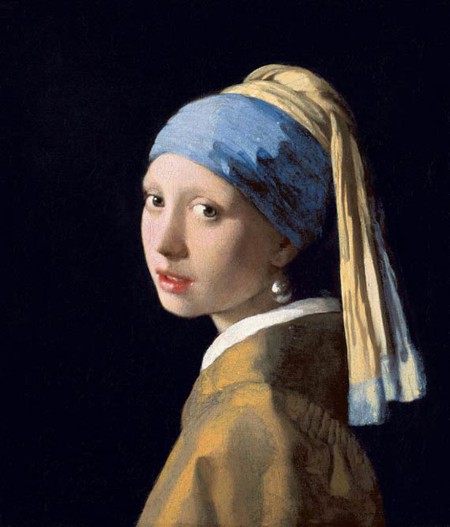 Defying the convention of Italian mannerism that was so prevalent in his era, Brueghel instead looked back to the Gothic age of Hieronymus Bosch. His early work has the mark of Bosch all over it, but tempered by changes in Christian morality caused by figures such as Martin Luther. Soon, however, he developed a unique style, in which man and nature were seen as perfectly balanced and attuned without losing either the wide scope of nature or the unique character of each man in the painting. 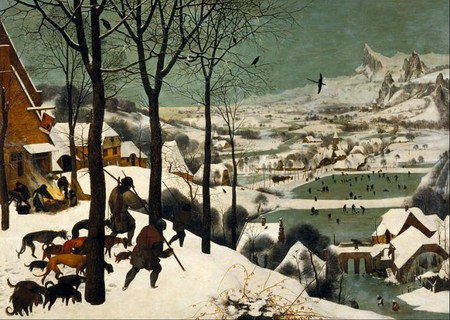 Peter Brueghel the Elder, Hunter in the Snow (Winter) | © DcoetzeeBot/Wikicommons

Predominantly a genre painter (the third highest in the genre hierarchy of its time behind epic and portrait painting), Steen was able to inject humour in what traditionally had been a very staid field. Eschewing the romanticisation of the peasantry practiced by many of his contemporaries, Steen altered composition forever by introducing untidiness into his work to reflect human untidiness over sanitised depictions of everyday life. Not for nothing does the phrase ‘Jan Steen household’ remain in Dutch, signifying a household both full of life and full of mess. 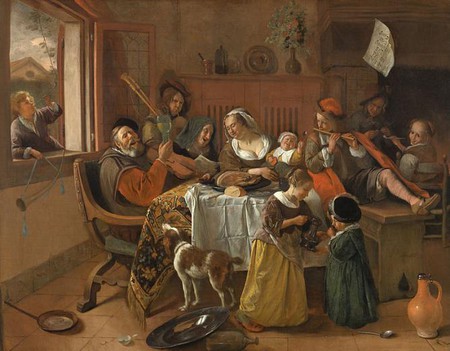 A truly unique figure in Dutch painting, Hieronymus Bosch was at once the master of the harmonious and the horrible, as reflected in his well-known Garden of Earthly Delights triptych panel painting. Thousands of words could not fully describe this stunning and terrifying work. Flanked by heaven on the left and hell on the right, it is proto-surreal, and would influence a remarkably diverse group of creatives across the centuries, from Goya to Dalí to David Lynch to the band, Black Sabbath. A fascinating anomaly in the evolution of Dutch art. 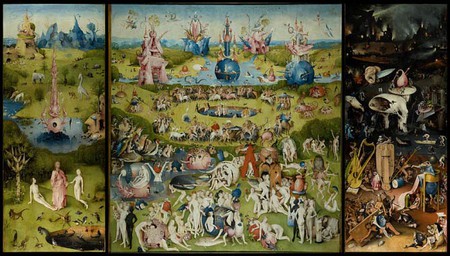 A contemporary of Bosch, van Leyden was equally radical in his own way. After all, he was one of the first Dutch painters to work in genre painting, a field that Netherlandish painters would really make their own over the following two centuries. On top of this, he was a master of copperplate engraving, consider as important an engraver to Holland as Dürer was to Germany. In an age where paintings were only available to a rich clientele, Leyden’s engravings of his paintings were a crucial way for the the emerging Dutch style to become known to a continent-wide audience.

A generation older than Rembrandt (although he lived nearly as long as him), many of the great’s works would not have been possible without the work of Frans Hals. Typically, Hals’ work featured looser, freer brushwork than any who had come before him, introducing a lively sense of movement and a lived-in quality to many of studies, with his most famous example of this being The Laughing Cavalier. Without this, put simply, Rembrandt’s portrait would not have anything like the prestige that they do, and portraiture leading right up to Lucian Freud would have taken a very different path indeed. 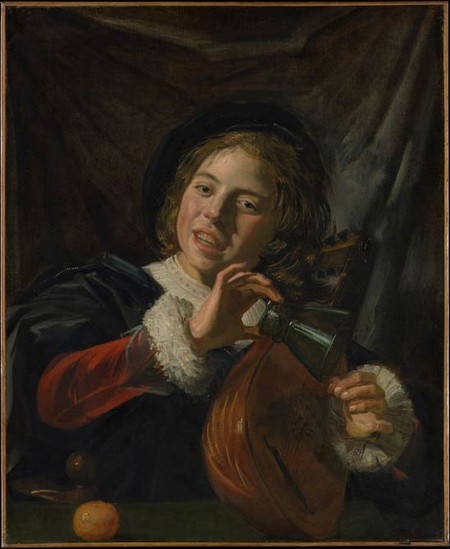 With Hendrick Terbrugghen came the influence of Caravaggio into Dutch painting. As part of the movement called Utrecht Caravaggism, Terbrugghen brought light and shadow interplay, darkness and illumination to Dutch canvases everywhere. Dutch canvases such as those that Vermeer would create a few decades after Terbrugghen’s death. Mostly working in prestigious epic painting, he brought softness and vibrancy to an often hard and dull tradition. Although we can only verify a painting career that lasted less than a decade, this was a crucial decade for the development of Dutch painting, with Caravaggio as a direct ancestor. 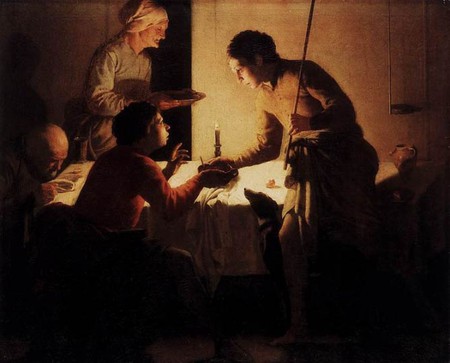 Although working in still life, considered the lowliest form of painting according to the traditional hierarchy, in our more democratic age many have called him the Vermeer of still life due to his expertise in depicting light. By painting so-called ‘ostentatious still lives’ (from the Dutch ‘pronkstilleven’) featuring selections of opulent objects, Kalf perfectly demonstrates his technique from a selection of shiny, glittering or glassy objects, as can be seen in his finest work Still Life with Drinking Horn (c. 1653), housed in London’s National Gallery 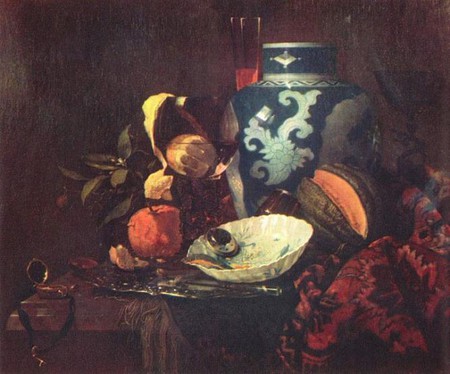 Whereas the masterworks created by women in painting’s past have often been left undiscovered, Rachel Ruysch achieved international fame in her own lifetime over a very long career specialising in flower paintings full of the vibrancy of colour and delicate interplay of light and darkness we have come to expect from Dutch Golden Age painting. Although the gender confined her to what was seen as the lowest form of painting, her success in the format is a testament to her greatness. 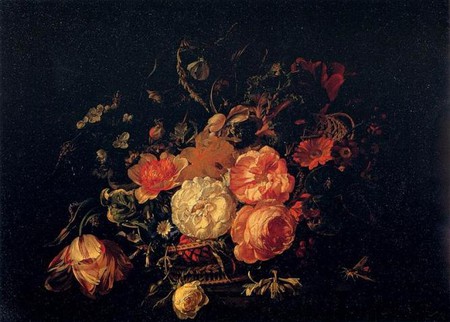 Rachel Ruysch, Basket of Flowers | © JarektUploadBo/Wikicommons
Give us feedback