Sophocles' Antigone Dares To Be A Girl In The Modern World

Among the fascinating cultural events taking place in Amsterdam this March, an adaptation of the classic Greek tragedy Antigone, by The International Theatre In English, should be at the top of your list. Written by Sophocles in 442 B.C., Antigone tells the tale of a young heroine that goes against society to honor the death of her brother. Adapted by Cintia Taylor and directed/produced by Theodora Voutsa, this reimaged version of the play depicts the empowerment of women and the crucial issues modern societies must grapple with today. We spoke with Voutsa to learn more about how the themes of Antigone resonate today, making this play a timeless work of art.

Could you say a few words about the play?

The play is an adaptation of Antigone by Sophocles. This adaptation is based on an idea that I had about promoting social issues. It occurred through the discussion with the theatre production and the parallel programming around it.

Actually, Antigone is followed by the symposium called #Daretobeagirl, where we invite representatives from different sides of the society to start a discussion on the violation of women’s rights. Although, nowadays we think equality is a given and that the battle of sexes is over, the numbers reveal a completely different story. For example, even in our days, women do not get paid the same as men, and in some countries, they still do not have the right to vote. 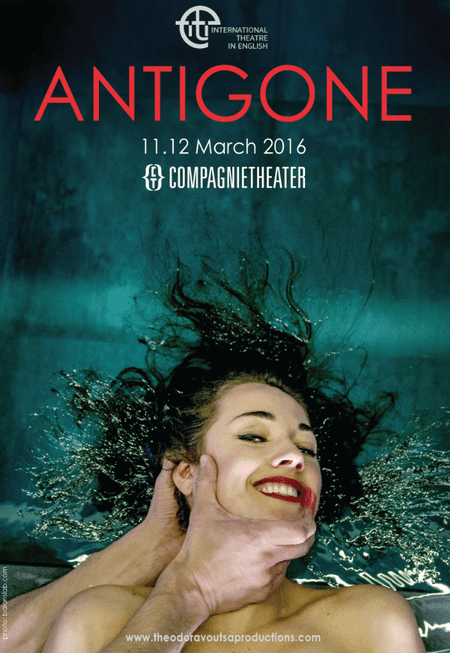 Why did you choose Antigone in order to raise the issue of gender inequality?

We chose Antigone as our first official production as a Foundation – last year we produced Oedipus Rex, a sold-out performance at the University of Amsterdam – because she is the first strong female character ever written in the theatrical history. Antigone is quite close to the Greek culture, but for the international audience, we thought it would be hard to relate to. The latter is the reason why I chose to make an adaptation and with the addition of Cintia Taylor’s original work to bring it to today, actually not to 2016, but make it timeless and without a place.

Furthermore, I have added a new character which is the primordial Antigone. This character emphasizes the idea that we keep coming into this life; we keep making the same mistakes until the lesson is learned. So, the same things that happened to women in 442 B.C. when Sophocles wrote the play are parallel to the things which keep happening today. Caroline Bech is playing the modern Antigone in English and Vasiliki Koutrouli the primordial Antigone in Greek.

Another innovation is the closer relation between Creon, played by Lolu Ajayi, and Antigone, meaning that he was abusing her when she was a child, in contrast with the original play where he just gives the order that Polyneices will not be buried. It is about the whole idea of a woman facing challenges and problems and finally getting to the point of standing up for her values. The original Antigone is about the underdog, while our Antigone is a political thriller where the underdog stands up and tells to society that it is not about the rules and laws, but about individuality. She knows that you as an individual can make a change; you have a choice to decide whether things are going to stay the same or not. 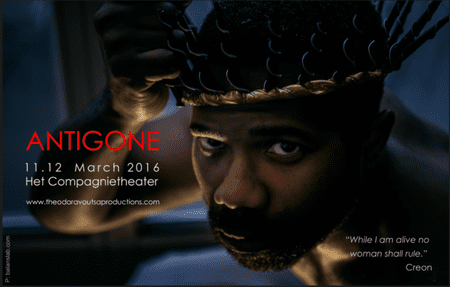 Apart from the inequality of sexes, could you say that Antigone is related to other social issues as well?

An illustrative example is that of the recent refugee issue. What happens if you as an individual want to help the refugees but your government says: ‘I am closing the borders.’ Where are the limits and the boundaries between the government and the laws and your personal values and ethics? Furthermore, the inequality issue brings up the need for more education, openness. These are the questions we are dealing with in the play.

Not everyone has the will or power to stand up, how do you approach this in Antigone?

I believe that even if one thinks he has reached a dead end, he can always think of a way to flip things over and make a change. This belief I have is strongly portrayed in the play through Ismene’s role, delivered by Amelie Onzon. In the original play, Creon is informed by a messenger that he lost everything, but I chose in this case that Ismene is the one who should inform him. In our adaptation, she understands her sister’s example and sacrifice and decides to take the torch and move forward. After all, she reveals that everyone has the chance to do something just by changing his/her perception of reality. 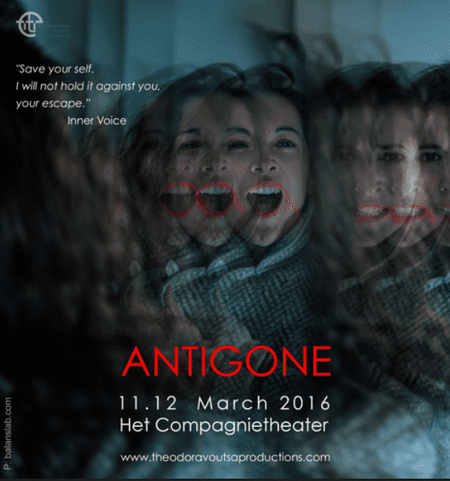 Could you tell us some details regarding the cast of your play?

We are very honored to have Adriane Brine guest starring as Tiresias. Apart from the above-mentioned main characters, the cast consists of a chorus of 24 international both beginner and professional actors. The whole cast is trained with the Los Angeles Method for a month prior to the beginning of the rehearsals. The Los Angeles Method is a combination of acting and personal development techniques helping the actors to improve their character in the play and themselves in their personal life. You need to be ‘strong’ to serve the role. This is what we do with the Los Angeles Method; we use a holistic approach when it comes to our artists.

My personal belief is that as actors we have the moral obligation to show certain things that people are afraid to look at. Beyond pointing out what is ‘wrong’ with society, we have to suggest ‘calls to action.’ The aim of the parallel programming is to open a discussion on the social issues that are raised by Antigone and every production that is launched.

Action coaches and directors from London and Los Angeles but also important foundations like the Anouk Foundation, the Bijlmer Project, The Professional Women’s Network and more are joining our discussion. We use art as a means of ‘therapy’ and suggestions. Having those foundations and professionals in our discussion not only gives us the chance to raise awareness for the already existing problems but also urge people to be part of the solution.

What would be the ideal message you would like the audience to receive by attending Antigone?

First of all, I would like the audience to be entertained. The first question that I want them to ask themselves is ‘What can I do as an individual?’ I would like the audience to think, either consciously or unconsciously, that this situation should stop, should not be ignored and it has to change. Each individual has the capability to make a change and reach each other in order to make the world a better place. Since emotions are the tools to achieve our goals, I would like that Antigone will have an impact on the emotions and instincts of the audience. I hope that by affecting people’s emotions, we could urge them to put emotions into actions.

You can attend Antigone on Fri 11th-Sat 12th of March at Het Compagnietheater. The play is a production of International Theatre in English and Theodora Voutsa Productions.

Theodora Voutsa is a director and producer who lives in Amsterdam. Founder of the TVP she currently teaches the Los Angeles Method classes. In 2015, she successfully put on play ‘Oedipus Rex’ in collaboration with the International Theatre in English.