The Stedelijk Museum in Amsterdam is home to works by some of the most renowned artists of the 19th, 20th and 21st centuries. Although the museum itself is quite small, the size and quality of its collection is sure to impress modern art lovers. The following are six art of the best exhibits, not to miss.

The Oasis of Matisse Exhibition

The Oasis of Matisse, running until August 16th, is the largest exhibition of the French artist’s work ever assembled in the Netherlands. The collection traces the entire course of Matisse’s career, from his early experiments with impressionism to his pioneering of the controversial Fauvist movement, and his later cut-out compositions. While Matisse’s contemporaries may have been shocked by his anti-representation style and his bold use of colors, today Matisse’s work is celebrated for the sheer naïve vibrancy, harmony and chromatic liberty that unite his landscapes, portraits, interiors and oriental nudes. The curators decided to integrate the paintings with the Stedelijk Museum’s own permanent collection, creating striking comparisons between Matisse and the artists who influenced him, such as Cézanne and Van Gogh, and those he would come to inspire including Mondrian and Newman. The monumental paper cut-out The Parakeet and the Mermaid (pictured above), was voted the visitors’ favorite piece and shouldn’t (and probably can’t) be missed. 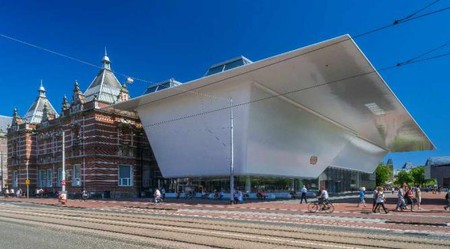 Delaunay took Matisse’s love of vivid colors even further by pursuing an almost academic fixation with chromatics. Delaunay believed that color was all that was needed for pictorial expression and structure and sought to bring it back into the artistic fore in response to the more muted compositions made by his Cubist contemporaries. This abstract painting fuels the imagination, capturing the essence of the warmth of sunlight and the coolness of night through the use of contrasting colors alone, and the swirling shapes give the painting a sense of palpable dynamism and movement. Formes Circulaires can be appreciated on a purely aesthetic level for its fluidity and vitality, but for Delaunay, his work was about evoking a vision of nature with color as the key to perception.

Piet Mondrian- Composition No. III With Red, Yellow and Blue 1927

If Delaunay was interested in the dynamics of colors and shapes, Mondrian was concerned with creating a sense of total equilibrium and harmony through the use of the primary colors and straight lines. This painting embodies the ethos of the artist’s de Stijl (the Style) movement which hoped to engender a new utopian order of purity, balance and absolute simplicity following the devastation of the Great War. Responding to the fragility of humankind exposed by the war, Mondrian and his contemporaries began to deconstruct art so that all that was left was the universal and eternal stability of colors and lines. The Stedelijk Museum is also host to a number of other pieces of de Stijl art and design, including the prototype for Rietveld’s de Stijl House, all of which were founded on the platform that primary colors and rigid geometry could stimulate transcendental feeling.

Like Mondrian before him, Newman associated simple, primary colors with notions of sublimity and perfection. Newman’s art is marked by an intellectualism typical of the Abstract Expressionist movement of which he was a part alongside Jackson Pollock and Mark Rothko (whose Untitled is also on display at the Stedelijk), in the late 1940s and early 1950s. Neman argued that art could no longer be beautiful following the horrors of WWII – it could only be serious, sublime and engage with a sense of terror and void left by this dark chapter of humanity. Cathedra is an example of a color-field painting: one single, flat area of color with no evidence of the painter’s mark. The viewer is left to introspectively interact with the work, undistracted by details and the artist’s presence. Newman wanted viewers to grasp at the idea of infinity and to acknowledge their own existential anxieties, indicated by the line cutting through the color, which Newman defined as terrifying realizations of consciousness. 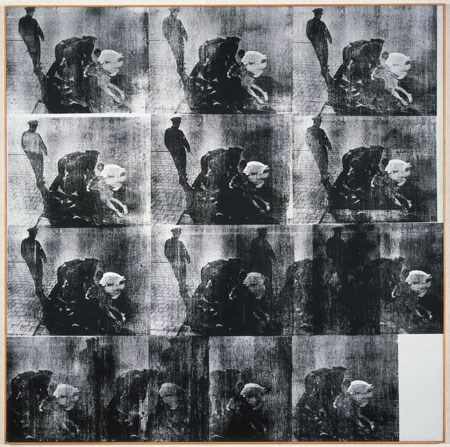 In the 1960s, Andy Warhol launched an assault on what he saw the elitist pretentions of Abstract Expressionism. He looked to remove art from its intellectual ivory tower and to bring it into the realm of the everyday. This image of a patient at the Bellevue Asylum who had committed suicide, printed fourteen times on the canvas, unflinchingly presents death – not as something abstract or philosophical, but as an unsensational fact of life. Warhol’s trademark process of repetition represents modernity’s commodification of the individual’s value. Through this pattern, Warhol cynically shows how mass-media has led to the desensitization of the public and has distanced us from empathizing with the subjects. Rather than considering the tragic circumstances in which this patient died, Warhol turns us into obsessive voyeurs of this image of death. Bellevue II is a truly unsettling and provocative masterpiece.

Nam June Paik’s installation of an 18th century sculpture of Buddha placed opposite a camera and screen, like Warhol, explores the relationship between fame, vanity and meaning. The statue of Buddha, seemingly staring at himself on the screen, hints at the all-consuming phenomenon of narcissism in this era of television, in which nothing has been left sacred or untouched by the media. Everyone, even the Buddha, a symbol of ascetic living, wants to be seen. The installation playfully takes this idea further- at certain angles the camera captures the visitor and distorts the perspective so that he or she appears to be the central focus on the screen. The visitor becomes a part of the artwork itself, and Paik seems to defy us not to indulge our own sense of self-importance while we enjoy our fleeting moment of television fame.