Robot Boats Could Soon Take Over the Canals of Amsterdam 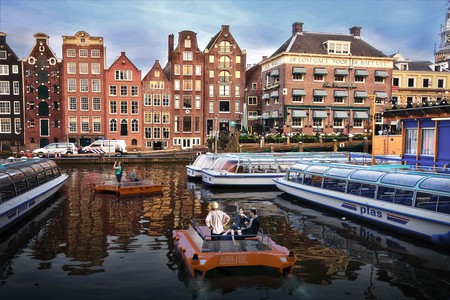 How a roboat could be used in Amsterdam | © MIT Senseable Lab

The impending invasion of automated cars on our roads has been extremely well documented, but driverless technology also has a multitude of uses on water. An MIT project using Amsterdam’s canals as a testing ground is exploring the opportunities.

The “Roboats” project is a research collaboration between MIT and the Amsterdam Institute for Advanced Metropolitan Solutions, and aims to launch a fleet of autonomous boats. The project began in 2016, and tests are still ongoing both in the canals of Amsterdam and once a week in swimming pools at MIT.

But what can you do with driverless boats? It turns out there are plenty of potential uses. “Roboats can be used for a vast array of functions. They can carry out tasks that would be prohibitively expensive in manned situations. They can be help to save costs when transporting people and goods around the city’s waterways,” says Professor Carlo Ratti, one of the principal MIT investigators on the project.

“Roboats will have other sensing capabilities: environmental scanning to monitor water quality and offer data for assessing and predicting issues related to public health, pollution, and the environment. Applications include real-time sensing similar to the MIT “Underworlds” project or retrieving the 12,000 bicycles that ends up in the Dutch city’s canals each year!”

Data collection is a key area of potential for the project. The boats would be able to gather information on water quality, and also viruses and bacteria information, creating a picture of a collective microbiome, which MIT’s Underworlds project has done in the sewers of cities.

Ratti also believes the Roboats could be used as temporary infrastructure. “Perhaps not dissimilarly to what happens each summer in Venice for the local Festa del Redentore, when a 300-meter bridge of barges is laid out by the population over the Giudecca, one of city’s largest canals. These kinds of infrastructure could be used for many purposes. You could even create pop-up public spaces, such as bridges or floating stages to host shows or concerts.”

Roboats share similar principles to automated cars, in that they use a variety of sensors to scan their surroundings, before feeding that information into an AI system and outputting driving instructions. The major difference is in the sensors, according to Ratti. The MIT group is experimenting with a variety of them in order to take into account the aquatic environment. The vehicle also has a different response when its a boat instead of a car. 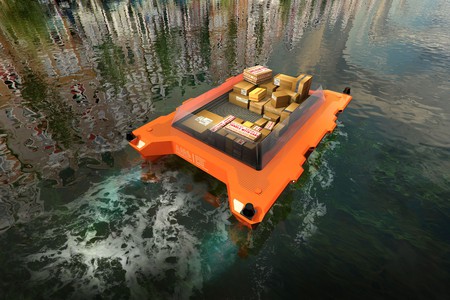 Automated boats could be used for deliveries | © MIT Senseable Lab

Turning a boat takes longer than turning a car, for example. But in general Ratti believes navigation on water may be easier than roads, as there are no pedestrians, and the canals in Amsterdam are subject to speed limits as low as six kilometers per hour.

Amsterdam was chosen to test the roboat fleet because of its 1,000 kilometers of canals, and 1,500 bridges. “With nearly one quarter of the city covered by water, Amsterdam is an ideal place for developing Roboats. The canal system was once the key functional urban infrastructure of the city and today still plays a major role in recreation and tourism,” says Ratti.

“Amsterdam’s waters, including bridges, canals, and the river and its docks, offer plenty of opportunity to help solve current issues with transportation, mobility, and water quality. With 80% of global economic output generated around coasts, riverbanks, and deltas and 60% of the world population living in these areas, outcomes from the Roboat projects could become a reference for other urban areas around the world.”