Piet Mondrian and De Stijl: The Paradox of Simple Complexity

From Yves Saint Laurent’s iconic Mondrian dresses to the ‘bold and brave’ American hotel chain inspired by the Dutch artist, Piet Mondrian, pioneer of the De Stijl movement, is perpetually present not only in the art of the Netherlands, but in contemporary culture worldwide. We take a look at one of art’s most influential modernists and the Gemeentemuseum’s recent Mondrian & De Stijl exhibition.

As Mark Rothko pointed out, Mondrian’s was an artist who appreciated sensuousness and sensuality, a fact often overlooked by newcomers to his geometric style. A lover of jazz, women and dancing, Mondrian’s enthusiasm for the abundance of the everyday found expression in pure abstraction and the paradox of simple-complexity, returning ultimately to the purity of simple form and colour. This approach became known as De Stijl, simply ‘The Style’. 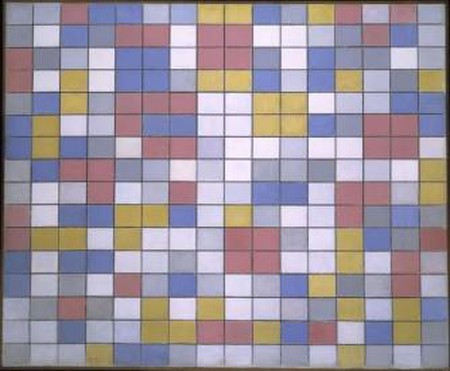 Both an artistic movement and a corresponding magazine established by Theo Van Doesburg, De Stijl is characterised by ostensible simplicity opening out into a more complex notion of neo-plasticity. For Mondrian, who indeed famously coined the term neoplasticism, the notion of the ‘plastic’ in art refers to the dynamism of form and pared-down colour on canvas as a revolutionary method of subtly expressing the fever of modern society. What is now characteristic of De Stijl therefore – the sensory delight of primary coloured, geometric shapes – in fact demonstrates the maturing of the movement towards clarification of the relationship between art and nature. 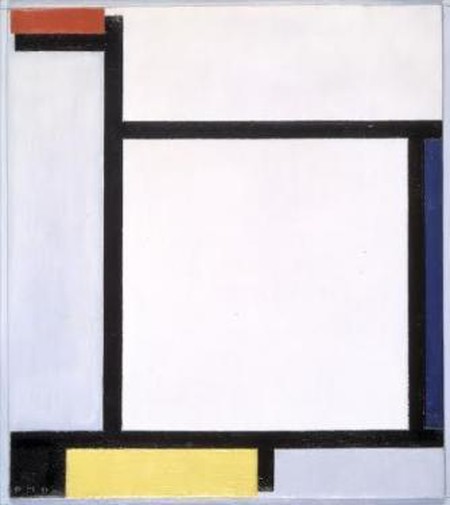 By returning to these basic elements, Mondrian, a committed theosophist, attempted to locate this elusive spirituality of nature: gradations of vertical and horizontal imagery in his work began to represent the balance necessary between natural points of opposition: between positive and negative, masculine and feminine and dynamic and static.

In homage to the pursuit of an utopian ideal of a total-artwork desired by the De Stijl artists, the Gemeentemuseum in The Hague has commissioned a beautiful exhibition space that is in itself a work of art. A collaboration designed by the renowned artist Krijn de Koning and architect Anne Holtrop, 63 Spaces for a Work consists of a cluster of rooms leading the viewer into the heart of the exhibition, gradually reducing in size from the ‘human scale to the scale of the work of art’. The works themselves are chronologically organised around the concept of ‘The House – the Street – the City’, based on Mondrian’s 1925 article of the same title, broadening out from the intimate living room paintings to the wide and open streets, addressing the concerns of society in Mondrian’s artistry and featuring photographs of the artist himself. The exhibition, which brings together over 300 works spanning the entirety of Mondrian’s career, accurately mirrors the artist’s own artistic progression, from faithful representation of the literal to complete detachment from reality in pure abstraction of social concepts. 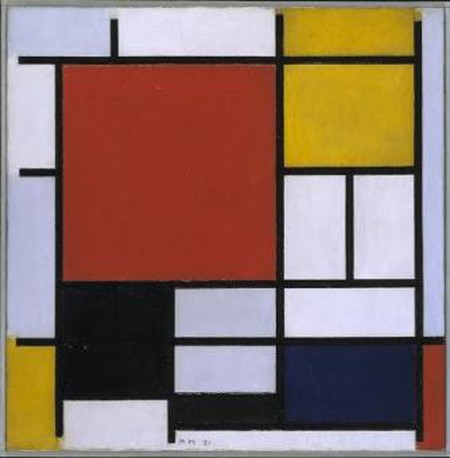 The works included in the exhibition move from the realist Korenschoven in het Veld (1892) to the start of Mondrian’s experimentation with a reduced colour palette in works such as Molen bij Zonlicht (1908). At the other end of the spectrum, sourced from Mondrian’s later period of artistry at the point at which curved lines had been almost eradicated from his work, the famously sought-after abstraction Victory Boogie Woogie (1944) stands proud. The strange canvas holds somewhat haunting dominance over the collection as the last work by Mondrian – left incomplete in 1944. The seemingly fluid movement of colour permitted in Victory Boogie Woogie by the removal of Mondrian’s characteristic black-framing, promotes an almost dizzying synthesis of pigments for the observer, scattered amongst the constantly enlarging and reducing box form to create an almost animate canvas. By having the works thus displayed according to Mondrian’s own history and development in Gemeentemuseum, the observer is able to move ever closer, both literally and figuratively, to an understanding of his pioneering style of painting that was to revolutionise modern and contemporary art. 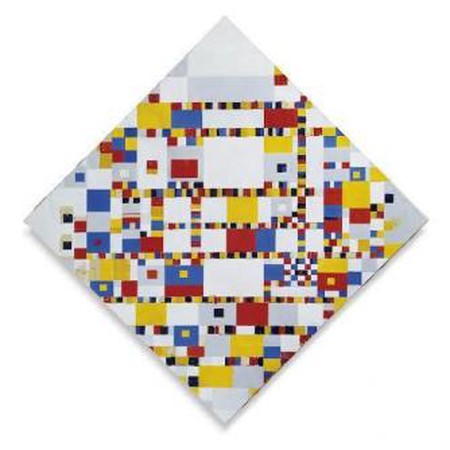 The immense impact of Mondrian’s De Stijl artistry is almost impossible to calculate given the sheer width and breadth of his philosophy, theory and composition. His work resonated soon after his death with the Bauhaus movement and with the later minimalists of the 1960’s, integrating also with Cubism in the daring manipulation of form and moving towards assimilation with Parisian Dada and the confusion of Surrealism. From humble beginnings as a student in Amsterdam’s Royal Academy of Visual Arts therefore, Mondrian’s courageous move against traditional artistry and into an experimentation with light and geometry has rendered him a vital figure in the scope of 20th and 21st century art history.