On The Verge Of Insanity: The Van Gogh Museum’s Latest Exhibition

Tracing the history of Vincent Van Gogh’s struggle with mental illness, On the Verge of Insanity portrays the artist as an isolated figure, whose personal and psychological demons left him exhausted and crestfallen. Enduring intense bouts of depression throughout his life, Van Gogh is shown to have been particularly vulnerable and, at times, unable to maintain relationships or pursue his career. Ostracized and impoverished, the artist lived on the margins of society – a troubled man who experienced the worst types of human suffering.

Combining art with written documents, the exhibition reconstructs the later part of Van Gogh’s career. Rapidly developing his style over this period, Van Gogh was also experiencing serious difficulties. He was poor, unrecognized, and temperamental, characteristics which tormented him, aggravating his already unstable state of mind. Van Gogh knew that he was ill and was terrified by the sudden outbursts of confusion and melancholy that had afflicted him since childhood. Sometimes he became completely delirious, hallucinating and losing consciousness altogether. Expressing signs of various disorders, Van Gogh’s mental illness remains undiagnosed, and the medicine of the time was ill-equipped to treat him.

Fascinated by other artists’ portrayals of the insane, Van Gogh’s perception of mental illness seems to have been distorted by symbolism. He worried that he resembled a madman and was convinced that his psychical appearance was marked by anguish. Sympathizing with Emile Wauters’ depiction of Hugo van Der Goes – a Flemish artist who famously battled with similar circumstances – Van Gogh believed he was possessed by the same melancholic sensitivity which had afflicted his predecessor. One of the most important artists of the Northern Renaissance, the painting shows Van Der Goes in the depths of despair, clawing at his hands, as he stares hauntingly beyond the frame. Breathless and confused, panic has contorted his features, making his madness visible. 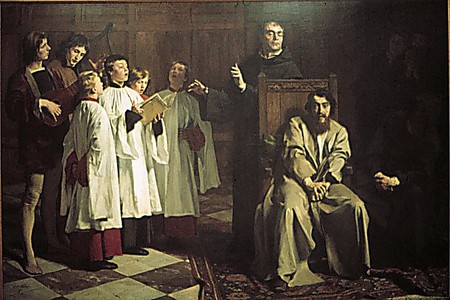 Van Gogh saw this painting as prophetic, foreseeing his own decline into madness, a belief which seems to have fed his insecurities. When presented with a portrait Gauguin had painted of him, Van Gogh immediately accused his contemporary of depicting him as a madman. He believed that Gauguin had deliberately emphasized the stress and fatigue that he was suffering at the time and was horrified by the results. The painting shows Van Gogh immersed in his craft, calmly adding detail to a canvas, while surrounded by one of his favorite subject matters: sunflowers. Warm and estival, the painting is noticeably sympathetic, suggesting that Van Gogh was preoccupied with his appearance, detecting signs of madness where others would see serenity or concentration. 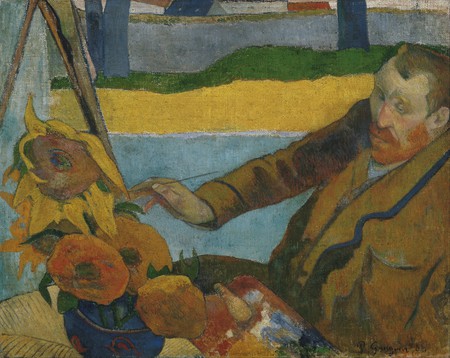 Famously, his relationship with Gauguin ended in violence. One night while they were working together, the artists began to argue, and when Van Gogh became aggressive, Gaugin fled, leaving him in a fit of rage and possibly delirious. Brandishing a razor, Van Gogh turned on himself, cutting off his left ear. Presenting new evidence, the exhibition reveals the horror that he inflicted on himself. A letter from Dr. Felix Rey, the physician who treated Van Gogh’s wound, confirms that the razor severed his entire ear, leaving only a small piece of connective tissue undamaged. 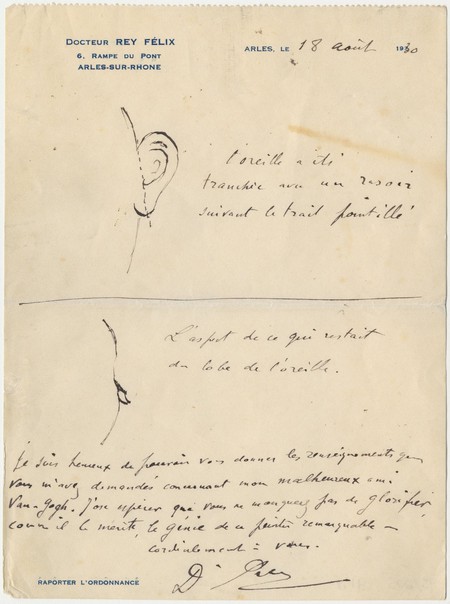 Van Gogh claimed to have no memory of this incident and immediately regretted his actions after regaining consciousness. He never painted his mutilated ear and rarely allowed others to see him without a heavy cap or beret. After being discharged from the hospital, he created two of his most acclaimed self-portraits, using the vivid, yet somber, style that has come to symbolize his later work. In both he is clearly injured, wearing bandages that cover the left side of his face. Outwardly, he appears calm, cheerfully smoking a pipe in one and sitting resolutely while bearing the hint of a frown in the other. As a subject, he could easily be mistaken for a war causality, maimed by shrapnel or a bayonet, rather than a victim of mental illness, perhaps indicating that Van Gogh wanted to avoid any association with madness, preferring that his injury be seen as an unfortunate accident. 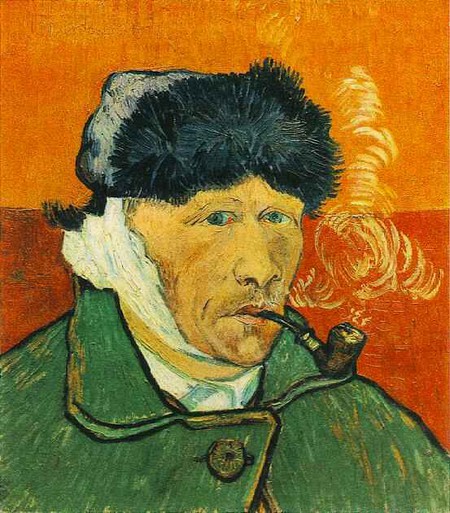 At several points in his life, Van Gogh was almost committed. Even a minor outburst made him difficult to be around, and growing tired of his behavior, many of his friends and family abandoned him. Other people saw him as a menace – a crazed beggar who was a danger to the community. While recovering from his injury, Van Gogh was evicted from his rented home. Collecting 30 signatures, his neighbors created a petition which they used to pressure the authorities. Caving to the public’s will, the police closed Van Gogh’s house, effectively running him out of town. This document has survived and is displayed at the museum, illustrating the venom used against this already broken man.

Tired and impoverished, Van Gogh voluntarily entered an asylum. Here, he became increasingly productive, allowing his art to move into previously unexplored territories. Shifting his focus to landscapes, Van Gogh began to create expressive pieces that romantically captured agrarian life. In these paintings the country is rugged and beautiful, a place cultivated by hardy people who unite around their labor. At the height of his abilities, Van Gogh remained seriously unhappy, overcome by loneliness, believing that he was a complete failure. 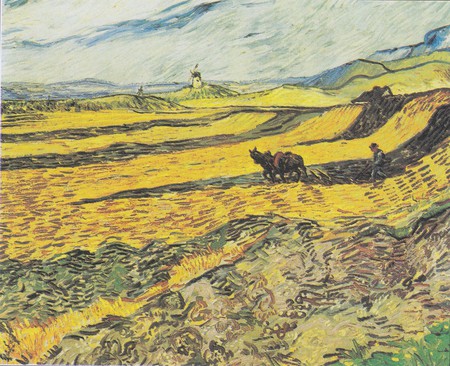 A few months after leaving the asylum, Van Gogh shot himself in the chest with a handgun. Mortally wounded, he later died in the hospital. His last painting, Tree Roots and Tree Trunks, appeals to the natural themes that he had been developing in the months before his death. Almost abstract, the painting is animated by color, indeterminately mixing vegetation with the earth. Possessing a unique style, this piece may have marked the beginning of a new period in Van Gogh’s career. A poignant reminder that suicide is invariably a tragedy – whose costs are unforeseeable.