How To Celebrate The Holiday Season In The Netherlands

On November 13, Sinterklaas arrives in the Netherlands, an event that marks the beginning of the Dutch festive season.

The 13th is celebrated throughout the country and coincides with several street parties that honor Sinterklaas. In Amsterdam, this jovial figure makes his way along the river Amstel on a rustic steamboat that is accompanied by an enormous flotilla of Christmassy dinghies. Thousands of Amsterdammers gather on the banks of the river to watch him pass by or wait for Sinterklaas and his entourage to disembark in the city center. After landing, Sinterklaas mounts his white horse Amerigo and then joins a parade that marches through Amsterdam’s main thoroughfares.

Although Sinterklaas resembles Father Christmas or Santa Claus he possesses several distinctive traits that differentiate him from his peers. Firstly, he is usually portrayed as a slim gentleman with a towering physique- a characteristic that reflects the Dutch population’s remarkable stature. And, unlike anglicised versions of Saint Nicolas, Sinterklaas dresses in clerical garments that are associated with the higher echelons of the Protestant church.

After his official arrival, Sinterklaas is believed to remain in the Netherlands until the evening of December 5 when he delivers gifts to families. This occasion is known as Sinterklaasavond, or Pakjesavond, and is comparable to Christmas day. During this holiday, families gather together for dinner before opening their presents. Many People enjoy hiding gifts and write cryptic poems that hint at their whereabouts, leading to small indoor treasure hunts. 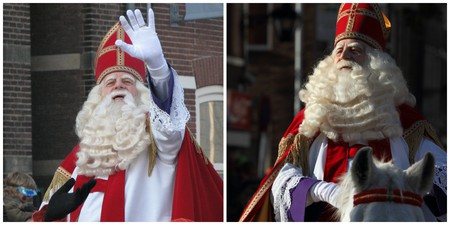 From mid-November onwards, the Netherlands changes its national diet and its residents begin to consume massive quantities of sugary snacks. Speculaas cookies are among the country’s most beloved festive treats and have a distinctive, spicy taste that contains subtle traces of cinnamon, anise and nutmeg. Oliebollen stands start to appear across the country encouraging Dutch people to stuff themselves with greasy, lumps of fried dough. Other sweets include a thick, crispy, bread filled with delicious marzipan, called Kerststol and tiny, penny sized cookies named pepernoten, that are guzzled down by the hand full. 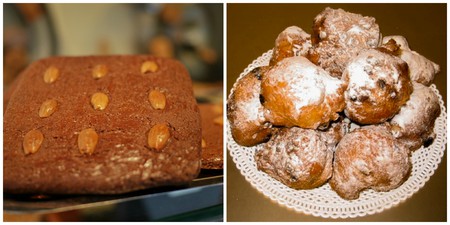 Traditional Christmas food is readily available throughout the Netherlands and is among the main draws of Dutch Christmas markets. Many vendors make their goods on site, consequently filling towns and cities with enticing wafts of freshly baked speculaas.

Like the rest of Western Europe, the Netherlands transforms into a winter wonderland during the festive season. Major cities usually turn on their lights before the end of November and the Bijenkorf on Dam Square kicks off the season with a massive lights show on November 17. 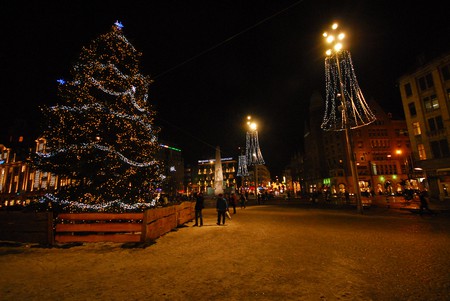 The Dutch are passionate ice skaters and eagerly await the colder weather. Occasionally, the country’s iconic canals will freeze over creating ready-made ice rinks. Although this doesn’t happen every year, most cities set up temporary outdoor skating facilities during winter. Likely, the most famous of their number is located on Museumplein- a particularly photogenic ice rink that borders the Rijksmuseum and the famous I amsterdam letters. 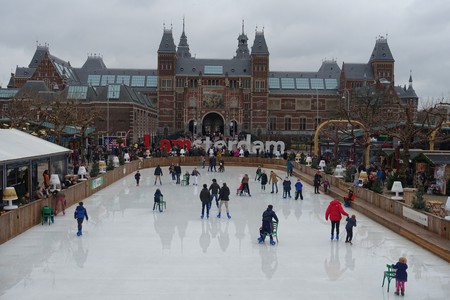 On Christmas Eve Dutch people once again exchange gifts, but this time without the guidance of Sinterklaas. Beforehand, many households set up Christmas trees and cover their living rooms in kitsch decorations. Smaller gifts are usually given during the holiday and it is generally a low-key affair that revolves around a cosy family dinner. Many restaurants and bars remain open on Christmas day and it is becoming increasingly common for young people to spend the holiday with their friends rather than relatives.