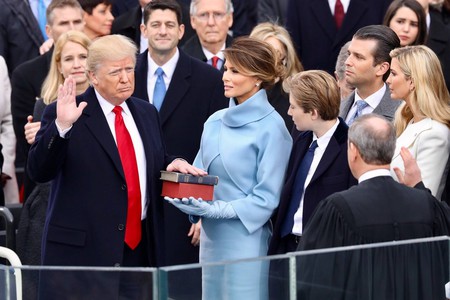 Over the past few days a clip from a Dutch satirical news show has gone viral on social media. This brief message lampoons Donald Trump’s divisive inauguration speech and jokingly pleads with the new president to put the Netherlands second, in response to his ‘America first’ rhetoric.

The video first appeared on last Sunday’s edition of Zondag Met Lubach – a weekly satirical news show that is hosted by the Dutch comedian Arjen Lubach. After its original broadcast, Lubach and his team added English subtitles to the clip and uploaded it to Youtube, where it immediately went viral.

Throughout the video a voice actor imitates Trump’s distinctive drawl and hyperbolic spiel in order to introduce the Republican leader to the Dutch homeland. Its narrator sarcastically brags about the Netherlands’ superior culture, language and heritage, whilst applauding the country’s quaint tourist attractions, such as the ponies at Slagharen theme park and Madurodam miniature village in the Hague.

At one point its narrator draws attention to a causeway in North Holland called Afsluitdijk and claims that this massive seawall was built to protect the Netherlands from Mexican water. Later on, the video addresses the President directly and advises him to move his business assets to the Netherlands, due to the country’s relaxed taxation policies.

The clip ends by assuring Trump that ‘we totally understand it’s going to be America first, but can we just say: The Netherlands second?’

While there has been no response from the White House, the video has caused quite a stir on social media and has been publicized by several American news sites, including the Washington Post and Time Magazine.