Behind the Scenes at the Rijksmuseum’s ‘All the Rembrandts’ 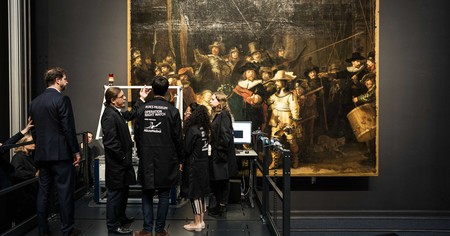 Rembrandt van Rijn was one of the most celebrated artists of the Dutch Golden Age. He lived from 1606 to 1669, and to coincide with the 350th anniversary of his death, museums across the Netherlands are commemorating his life and work. From 15 February to 10 June 2019 the Rijksmuseum in Amsterdam hosted a major exhibition titled All the Rembrandts. 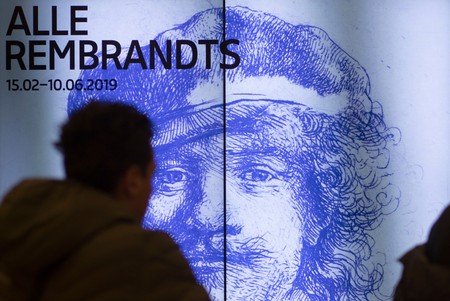 A poster for the exhibition | © Peter Dejong / AP / Shutterstock

With 22 works, the Rijksmuseum holds the world’s largest collection of paintings by Rembrandt. The museum’s expansive Rembrandt collection also encompasses drawings and approximately 1,300 prints, many of which are in a fragile condition. As the name of the exhibition suggests, the museum showed all its Rembrandt paintings at the same time, along with 60 drawings and over 300 prints. 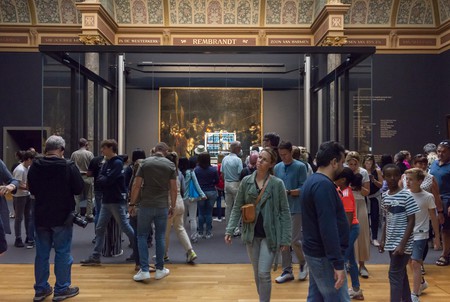 The museum’s most famous painting, the work popularly known as The Night Watch, was not displayed alongside others in the exhibition. The group portrait, more formally known as Militia Company of District II Under the Command of Captain Frans Banninck Cocq, remained on display in the Rijksmuseum’s purpose-built Gallery of Honour. The painting is widely regarded as an icon of the Dutch Golden Age, a period of unprecedented wealth in the Netherlands that coincided with Rembrandt’s lifetime. 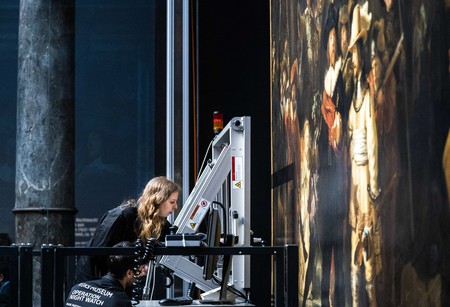 “Rembrandt is about us, as human beings, in all our imperfections,” said Taco Dibbits, the general director of the Rijksmuseum, while unveiling All the Rembrandts to art journalists from around the world. Dibbits expressed the view that Rembrandt was a groundbreaking artist with the ability to represent truth with great tenderness.

As a young man in Leiden – the city in which he was born, 40 kilometres (25 miles) southwest of Amsterdam – Rembrandt would wander the streets sketching people going about everyday activities. His subjects included musicians and beggars; he also captured likenesses of friends and family members. When he lived at home with his mother, the artist would etch details of her face, including her wrinkles. Famously, he would also practise capturing his own expressions, creating a volume of self-portraits that remained unmatched by any artist until the 20th century. 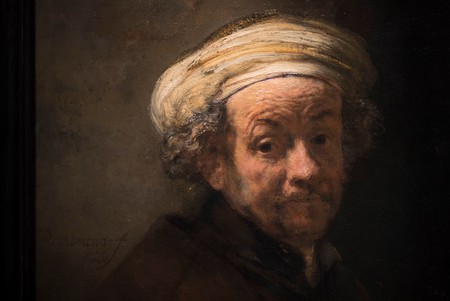 “One of the things he was remarkably good at was the observation of daily life. As a storyteller he was incomparable,” ventured Erik Hinterding, the Rijksmuseum’s curator of prints and, along with Mireille Linck, one of the curators of All the Rembrandts.

Hinterding explained that the focus of the first half of All the Rembrandts was on Rembrandt as an observer of people. In the second part, the emphasis was on the artist as a storyteller. The theme of the final room was intimacy – both the intimacy of female nudes and that of Rembrandt sharing his knowledge of techniques and colour with his students. The approach was thematic rather than chronological, though works were displayed in chronological order within each theme.

Visitors were invited to meet the artist through his self-portraits, which included a remarkably mature depiction of himself, painted when he was 22 years old, with much of his face in shadow.

Linck explained that the curators spent a significant amount of time considering how they were going to place all of Rembrandt’s works in the rooms available, admitting that it was quite a challenge. Not only did they need to select which works would go in which room, but also which works would go together in which frame. Clustering works into ensembles had the effect of creating stories within stories. 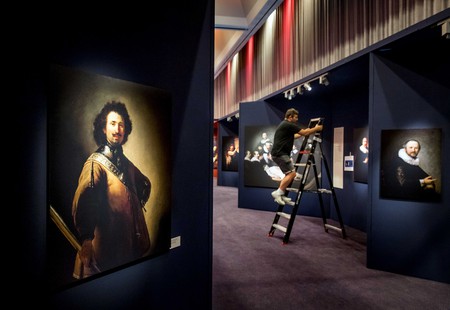 Saskia van Ulenborch, Rembrandt’s wife, features in the artist’s oeuvre. Together they had four children, three of whom died before adulthood. Saskia herself passed away in 1642, while Rembrandt was working on The Night Watch. He did not paint another portrait for more than nine years. 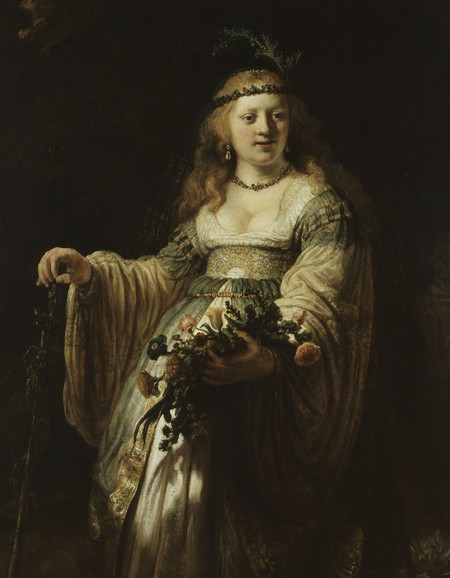 Jonathan Bikker, the Rijksmuseum’s curator of research and author of Rembrandt: Biography of a Rebel (2019), a book published to coincide with the exhibition, acknowledged that Saskia’s death had a major impact on the artist. He pointed to her passing as a changing point in Rembrandt’s life; it seems that the artist no longer wanted to take part in the rat race.

“He did the things he liked to do, such as [going for] walks in the countryside. In the 1640s, he produces 23 landscape etchings … he has more pupils in the 1640s than any other Dutch artist. He loved collecting art. He was notorious for the amounts of money he would spend on his art collection … That turned out to be his financial ruin,” explained Bikker.

Rembrandt’s drawings and prints of the countryside around Amsterdam also featured in All the Rembrandts. The blue walls of the rooms were chosen in the belief that colour would help to bring Rembrandt into the 21st century. Hinterding commented that the undulating shape of the walls enhanced the exhibition by allowing visitors to go along with its story.

Visitors to All the Rembrandts could listen to an audio guide providing contextual information about the artist’s life and works, read the legends with details about the pictures or simply view the artworks. People’s approaches to exhibitions tend to vary, depending on their knowledge of the subject matter.

Twin portrait paintings of Marten Soolmans and Oopjen Coppit together count as the Rijksmuseum’s most recent Rembrandt acquisitions. The opulent clothing worn by the couple provides an indication of the wealth possessed by the well-to-do of the Netherlands during the nation’s Golden Age. 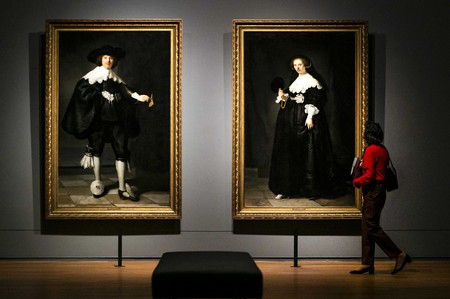 The access to the works and the lighting of the rooms meant that the paintings were presented in such a way that visitors could get close enough to see evidence of the techniques used by Rembrandt. He would scratch details into some surfaces with an upturned brush; on others, he would layer paint using a palette knife to create texture.

The studies of character and emotions that Rembrandt produced from a young age enabled him to bring dynamism to group portraits such as Syndics of the Drapers’ Guild. He brings realistic expressions and gestures to paintings of biblical scenes, and great intimacy to works such as The Jewish Bride. 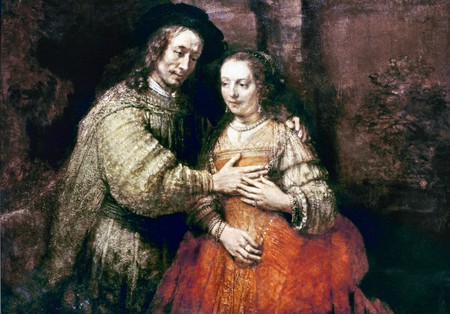 “To look at Rembrandt’s art is to experience our own humanity,” said Bikker, reflecting a sentiment shared by many art lovers.

Visitors to the Rijksmuseum can continue to view works created by Rembrandt. The Night Watch is undergoing restoration in public view, while still displayed in the Gallery of Honour, for approximately 12 months from July 2019. 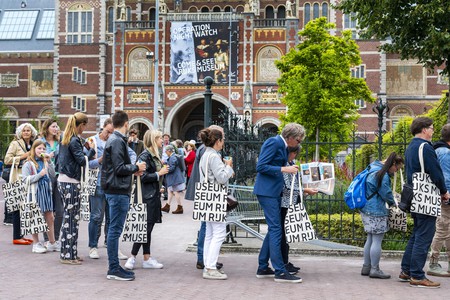