A Guide To Dutch Christmas Foods 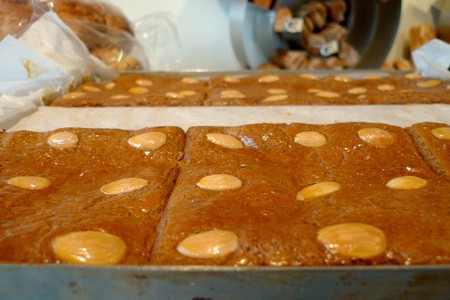 With the festive season almost upon us we decided to put together a list of Dutch seasonal specialties that are guaranteed to win over even the most steadfast Scrooge. All of these delicious snacks, drinks and dishes exude yuletide cheer and radiate warming, Christmassy aromas.

These thin, crunchy cookies are laced with a handful of delicious spices that give them a distinctive flavor that is somewhere between a British gingernut biscuit and Germany’s anise infused springerle cakes. Speculaas is typically eaten during Sinterklaas, but generally start appearing in Dutch supermarkets around October. They are often baked into festive shapes or made to resemble objects that are traditionally associated with the Netherlands, such as windmills or clogs.

Although this dense variety of speculaas tastes similar to its namesake the cake’s almond filling and soft crust put it into a league of its own. Its crumbly top and bottom is much softer than regular speculaas and makes it perfect for soaking up large quantities of coffee or tea. This spicy base is filled with a thick layer of creamy marzipan and then baked into a sugary sandwich. Fresh gevulde speculaas can be bought from most supermarkets during the festive season and many Dutch bakeries pride themselves on their particular take on this Dutch classic.

At the start of the Christmas season Dutch pubs begin to sell a delicious type of mulled wine called glühwein. This warming drink is significantly more peppery than other European variants and contains traditional Dutch spices like anise, nutmeg and cinnamon. These aromatic ingredients are boiled with red wine and the resulting beverage is then served up with a slice of orange or an aniseed star. A waft of glühwein smells like christmas and guzzling down a glass or two will immediately remedy the winter shivers. 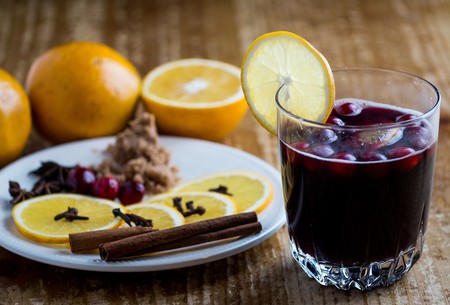 Oliebollen literally translates to English as oil balls and resemble large, spherical doughnuts covered in delicious molten fat and powdered sugar. Obviously, these greasy treats are exceptionally calorific and should be approached with caution, as it is extremely easy to end up scoffing down a whole tray of oliebollen before even realizing it. Over Christmas, hundreds of oliebollen street vendors pop up around the Netherlands and prepare these tasty pastries from inside dedicated food trucks.

Traditionally, pepernoten came in many shapes and sizes but are now usually baked into thick, penny-sized discs. The cookies taste very similar to speculaas and contain almost the same ingredients. However, pepernoten have a pronounced tang and crunch that differentiates them from speculaas. Dutch stores tend to sell pepernoten by the bag full and it is common to see the cookies covered in chocolate or marzipan. 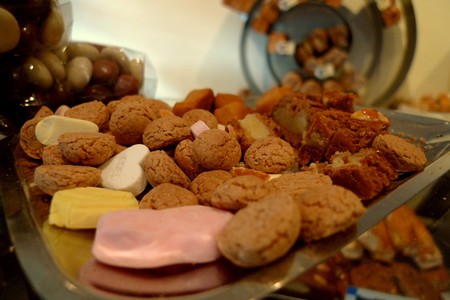 Kerststol is an oval shaped sweet bread that is filled with large chunks of almond paste and dried fruit. Bakers first create a sugary dough and then add sultanas, raisins, brandy and lemon zest. Afterwards this mixture is rolled over a slab of marzipan, creating a swiss roll-like concoction which is baked until its outer crust is crispy and brown. Kerststol’s filling remains soft and fluffy after taking it out of the oven and its center should be deliciously gooey. People often glaze it with poedersuiker (confectionary sugar) and eat Kerststol with a glass of seasonal beer or wine.

Although this dish is eaten all year round in the Netherlands, during the colder months stammpot becomes the staple meal of many Dutch households. The idea behind stamppot is cunningly simple and revolves around northern Europe’s favorite vegetable: the humble potato. This starchy base is pounded into a fine mash and then mixed with other boiled vegetables such as kale, carrots or peas -a process that adds a dash of color to the potatoes. Several types of meat are usually served on top of these mashed ingredients and stammpot is often garnished with lashings of thick gravy. 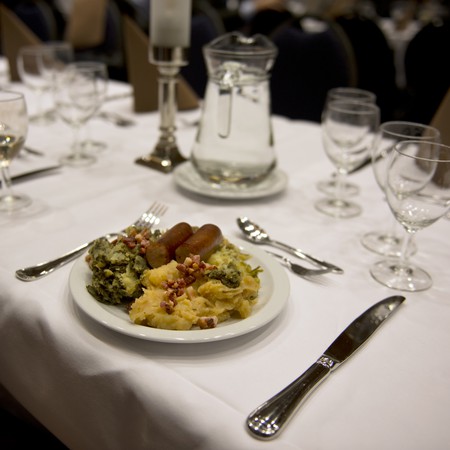