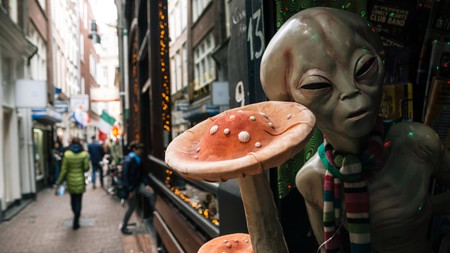 Even though magic mushrooms are illegal under Dutch law, many smart shops in Amsterdam stock other hallucinogenics called magic truffles that contain identical psychoactive compounds including psilocybin, psilocin and baeocystin. These truffles are derived from the same fungi as magic mushrooms and have very similar effects to their illegal counterparts.

Psilocybin mushrooms, more commonly referred to as magic mushrooms or shrooms, are found throughout the Americas, including the United States, Mexico and South America. They’ve been used in rituals throughout various cultures for thousands of years and their psychedelic properties have been studied extensively over the past half-century.

There are dozens of different strains of magic mushrooms and their impact on the body is similar to that of LSD and other potent hallucinogens. Psilocybin mushrooms can produce strong positive and negative effects on the brain, including but not limited to an intensified sensory experience and feelings of relaxation, as well as paranoia and nausea. Large doses of psilocybin can intensify negative reactions, especially if other mood-altering chemicals such as alcohol or marijuana are also consumed.

The difference between magic mushrooms and magic truffles

The term “magic mushrooms” may be used to mean any hallucinogenic fungi, but while they are similar to magic truffles, they are in fact separate psychedelics. That said, both contain active compounds baeocystin, psilocin and psilocybin – albeit in different concentrations – and both can be consumed in a similar way.

Aside from the legalities of each and the concentrations they are consumed at, the most significant difference between magic mushrooms and magic truffles is the way they grow. With their tall, thin stems, white-topped caps and dark undersides, the former look similar to many other non-psychoactive or poisonous mushrooms. Truffles, on the other hand, grow beneath the ground.

Mixing magic truffles with other substances

Whether you are looking for a crazy night out or a chilled afternoon, Amsterdam’s relaxed yet responsible drug and alcohol culture presents opportunities to indulge in fun experiences few other places in Europe can deliver. Should you choose to consume magic truffles, it’s a good idea to make sure you’re only enjoying one legal high at a time – especially if this is your first time experimenting with them.

As with other drugs, different strains and concentrations will produce different physical and psychological effects. Your body may react to a specific truffle in a positive way, while another person may have a serious adverse reaction to the same thing. To keep the risk of negative effects low, it’s always a smart plan to lay off the alcohol and other mood-enhancing drugs. Remember, you can always ask for advice at one of Holland’s smart shops, where they sell the stuff, to help you decide whether experimenting with truffles is right for you.

Despite sharing their name with one of the most prized gastronomic delicacies in the world, magic truffles don’t taste great. In fact, they taste somewhere between dry soil and old, damp walnuts. Although it is possible to disguise this taste by seasoning them with herbs, spices or other ingredients, the truffles are still quite difficult to digest and often cause pretty harsh bouts of nausea. It is also possible to brew a tea out of the truffles by covering them in boiling water, then guzzling down the resulting brown stew – bits and all.

There are around 40 smart shops in Amsterdam, selling a wide range of paraphernalia related to cannabis, drug culture and legal highs. Most of these stores also stock strains of magic truffles in bags or boxes, usually labelled with small blurbs that describe their effects. Clerks at these stores are often pretty knowledgeable about their wares and many will advise customers about magic truffles if asked.

It is always advisable to plan ahead when taking magic truffles, as their effects can be overwhelming. Think, comfortable, controlled environments such as living rooms or bedrooms with comfy sofas, blankets and easy access to tap water. Strolling through green areas like parks or forests is also nice, so long as you’re certain that you’ll be OK with interacting with strangers, as this can become quite daunting when you’re under the influence.

Although it is difficult to estimate when the effects of truffles will wear off, most trips last less than six hours and most users will be more or less back to normal within eight. Fortunately, small, one-off dosages don’t usually cause particularly bad hangovers, but it is still important to drink water, eat vitamin-rich food and rest after taking truffles.

This is an updated version of an article originally by Tom Coggins.