A Brief History of Vondelpark, Amsterdam

Recognised as the most popular urban park in the Netherlands, Amsterdam’s Vondelpark attracts over 10 million visitors every year. This impressive statistic is partly due to the park’s fascinating history and enduring place within Dutch culture.

Before the 19th century, the land on the southern quarter of Amsterdam’s canal belt was largely uninhabited. In 1864, a group of affluent citizens decided to develop this swampy plot into recreation grounds and commissioned landscape architect Jan David Zocher to design a private park. A year later, their plans were well underway and the first section of the park opened to the public.

These gardens were originally known as het Nieuwe Park (the New Park) and visitors were only permitted inside after paying an entrance fee. A few years later, a statue of Dutch poet Joost van den Vondel was constructed in the park’s centre and people eventually began to call the entire area Vondelpark. 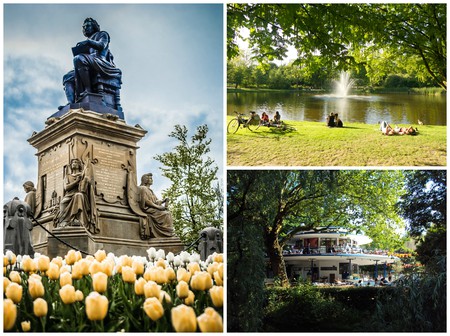 Vondelpark’s popularity steadily increased over the years and many important sites were built inside its borders including an open-air theatre and a charming modernist pavilion called ‘t Blauwe Theehuis. In 1947 a bunker was excavated underneath a bridge crossing the northern side of Vondelpark. Due to financial difficulties the shelter was quickly abandoned and then appropriated by squatters. In 2011, this subterranean space was converted into a non-profit cultural centre called de Vondelbunker.

By the mid-20th century, maintaining the park had become extremely expensive and its owners decided to donate their land to Amsterdam’s municipality. The government subsequently turned Vondelpark into a public space, allowing visitors to enter its grounds free of charge.

Due to its historical and cultural significance, Vondelpark is currently protected as a national monument.