A Brief History Of The Stadsschouwburg Theatre 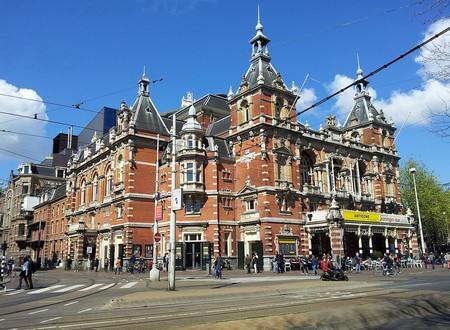 Although it may appear ancient, Amsterdam’s municipal theatre, the Stadsschouwburg, was actually built in the late 19th century. Before its construction, the city’s dramatic societies perfected their work in another, equally important building that led to the creation of the current Stadsschouwburg.

A growing number of independent groups of poets, actors and playwrights started to appear in Amsterdam at the end of the Middle Ages. These societies were called the chambers of rhetoric, and performed their work upon improvised stages around the city. In 1637, one group decided to establish a permanent theatre, and commissioned the famous Dutch architect Jacob van Campen to design their organisation’s new home. This building was constructed on the western belt of Amsterdam’s canal ring and was named de Schouwburg – a title that translates into English as the ‘theatre building’.

Although this theatre was hugely successful and helped to cultivate Dutch Golden Age dramaturgy, it could only accommodate a small audience. By the 1660s, many people felt that its design was already archaic and incompatible with modern architectural standards. To remedy this problem, the theatre was extensively renovated and doubled in size. Its stage was completely remodelled and given additional features including trapdoors and machinery. 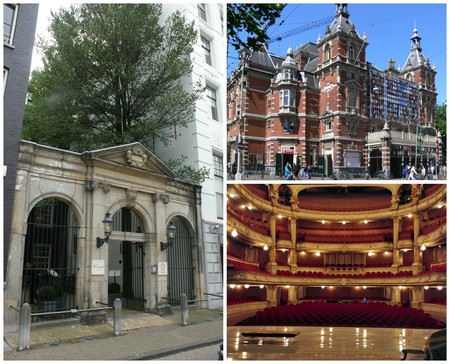 This new building served Amsterdam’s players until 1772, when a steward carelessly set fire to its stage with a naked candle. The resulting blaze could be seen from The Hague and eventually destroyed 22 houses and killed 18 people. Afterwards, the theatre was in ruins and its owners decided to relocate to Leidseplein. While large parts of the building were razed during the fire, its original gates survived and are still standing today.

After rebuilding the theatre on Leidseplein, Amsterdam’s dramatic community was once again struck by disaster in 1890 when they witnessed their headquarters burn to the ground. Two years later another theatre was opened and given the name the Stadsschouwburg, meaning the ‘city theatre building’. This final construction was designed by Jan Springer, an important figure at the Hague’s Royal Academy of Arts, who infused the building with elements from neo-renaissance and neo-baroque architecture in order to create a site that reflected the impressive heritage of Amsterdam’s dramaturgy.

📅 Visit the Stadsschouwburg website for a full program guide.