A Brief History Of The Oude Kerk 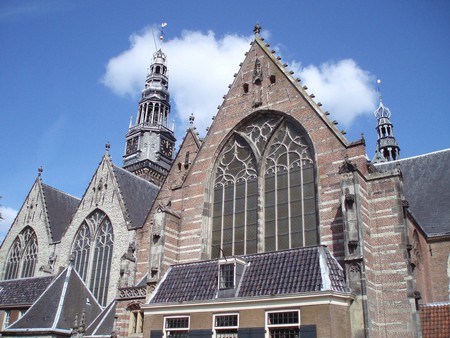 A chapel has stood on the foundations of the Oude Kerk for more than 800 years, and this monumental church is recognised by historians as the oldest building in Amsterdam. Although today it is mainly used as a cultural center, the church has a fascinating past that coincides with several important events from Amsterdam’s history.

In the early 13th century, a small Catholic parish built a wooden chapel on the banks of the river Amstel. This site quickly became the main place of worship in Amsterdam and was eventually consecrated by the Bishop of Utrecht in 1306. A century later its timber walls were reinforced with stone and the church was significantly expanded in order to accommodate Amsterdam’s growing population.

After another church was constructed on Dam in 1408, this older building was given the title Oude Kerk (Old Church) – a name that reflected its already impressive history. Over the next 200 years Oude Kerk was enlarged substantially and given a Romanesque cruciform layout. 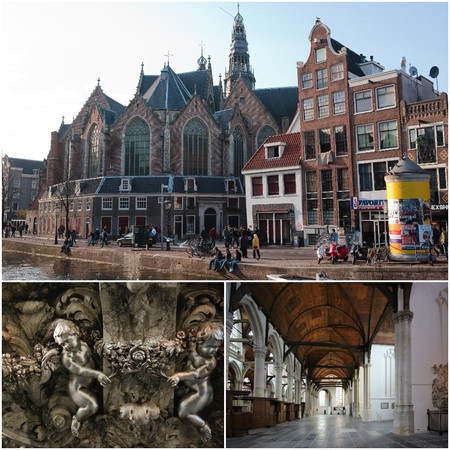 When Calvinism hit the Netherlands and the country’s authorities converted to protestantism, many older religious buildings were confiscated from the Catholic faith including the Oude Kerk. In 1566 the church was ransacked by local Calvinists and most of its Catholic iconography was either destroyed or stolen. This iconoclastic attack was meant to expel any hint of Catholicism from the Church and make way for Amsterdam’s new orthodoxy.

The Church was seriously altered after this tumultuous period and became completely Protestant meaning that its interior was given a much more sober appearance. Besides conservation efforts and slight renovations, the Oude Kerk has remained relatively unchanged since then.

Although the Oude Kerk is still owned and operated by the Dutch Protestant church it now welcomes members of every faith, and once a year holds a Catholic procession called ‘the Miracle of Amsterdam’ which honors a miracle that took place during 1345.