A Brief History of the Dom Tower, Utrecht

As Utrecht has remained the religious capital of the Netherlands since the Middle Ages, the city features many monumental ecclesiastic buildings, including its most iconic landmark, the Dom Tower. This massive bell tower has stood in Utrecht’s historic centre for over five hundred years and is among the most prized examples of Gothic architecture in the Benelux region.

The tower was constructed in the late 14th century, at a time when the church of Utrecht had gained an unprecedented amount of power and influence. Although primarily a religious building, the Dom Tower was also used for symbolic and strategic purposes. As one of the highest and most expensive buildings in the Netherlands, it perfectly captured the church’s authority, whilst also providing its owners with an extremely effective watchtower.

Although, the Dom Tower currently stands alone, it was originally designed as a steeple and was once attached to a cathedral. The nave of this church remained incomplete for many years and was ripped apart by a tornado in 1674. The Dom Tower was largely unharmed by the storm and has remained free standing ever since. 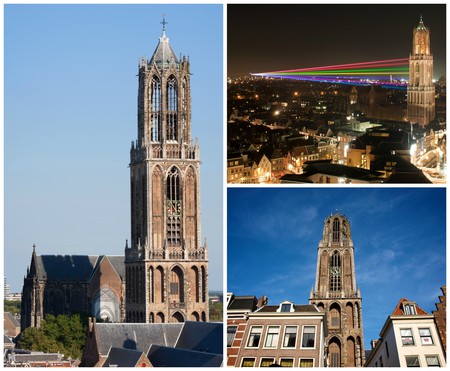 Due to its height, age and unique design, the tower needs constant upkeep and has been renovated several times over the years. In fact, in 1836 it was almost demolished after its upper levels were seriously damaged by a storm. Fortunately, these plans were eventually abandoned and the Dom Tower was reconstructed instead of removed.

Today, the Dom Tower is open to the public and it is possible to climb its 456 steps via a booking office at its base. During clearer days, Amsterdam and Rotterdam are actually visible from the tower’s highest peak, as well as many other Dutch towns. The tower is also available for wedding ceremonies.