After building four popular cinemas in Rotterdam, Tuschinski realized the growing potential of his business and decided to construct the most luxurious movie theater in the Netherlands. Sensing the magnitude of his project, Tuschinski lent his name to the building and poured millions of guilders into its development. To accomplish this vision, he employed leading Amsterdamse School architect Hijman Louis de Jong to design his masterpiece.

De Jong and Tuschinski worked on the venture for several years and frequently quarreled over small details. Eventually, their plans came together, and de Jong was able to infuse the building with a peculiar sense of style that balanced monumental forms with a welcoming layout. From the outside, the cinema resembled an extravagant cathedral, complete with towering steeples and a cavernous entrance. Its interior, on the other hand, contained hundreds of ornamental design features that were selected and arranged in order to foster a hospitable ambiance. 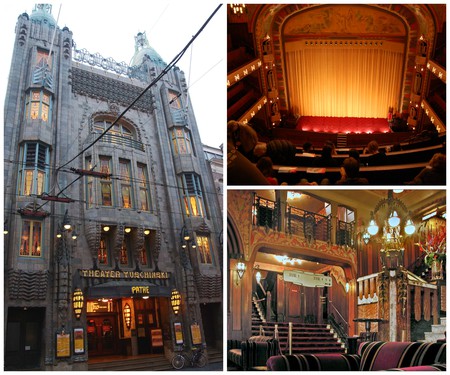 When the theater opened, it was considered revolutionary, and its screening rooms were among the most advanced in the world. The whole building was heated by a modern ventilation system that kept warm air circulating throughout its halls, while its labyrinthine corridors were covered in elegant, floral decorations that replicated traditional Japanese and Arabic motifs. Later on, a customized Wurlitzer theater organ, which was used to accompany silent movies and entertain guests during intermissions, was installed in its main auditorium.

Due to his Polish-Jewish descent, Tuschinski was targeted by the Nazis during World War II, and all of his property was seized by the occupying forces. In 1942, Tuschinski was deported to Auschwitz where he was tragically murdered. His name still lives on at the Tuschinski Cinema, and the theater has remained a vital part of Amsterdam’s cultural landscape since its construction.