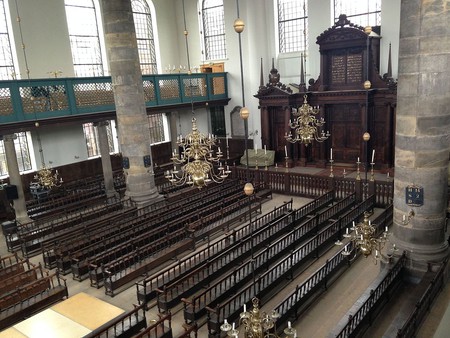 During the Dutch Golden Age, thousands of Jewish-Portuguese fled their homeland and immigrated to Amsterdam. In Portugal, they faced institutionalised anti-semitism and were forced to choose between conversion, expulsion or execution. Many decided to leave the Iberian peninsula altogether and travelled north towards countries controlled by the Protestant church.

At the time, the Netherlands was among the most religiously liberal nations in Europe. As a Protestant republic, the country’s government tolerated other faiths and were less inclined towards religious persecutions. In Amsterdam, Judaism flourished and in 1670 the city’s municipality gave its Portuguese population permission to build an enormous synagogue on the banks of Herengracht canal.

This site united Amsterdam’s Portuguese-Jewish community and became their main place of worship. Before its construction, congregations observed rites in secret and performed ceremonies in small, hidden temples spread across Amsterdam. This new synagogue allowed them to worship in public and openly practise their faith.

The synagogue was completed on August 2, 1675 and has been active ever since. Its main pulpit is divided into two rows facing a central aisle that is used by Rabbis to carry sacred artefacts between the synagogues’ library and altar. The floor of the square gallery is still covered in fine sand in order to absorb moisture and muffle footsteps. 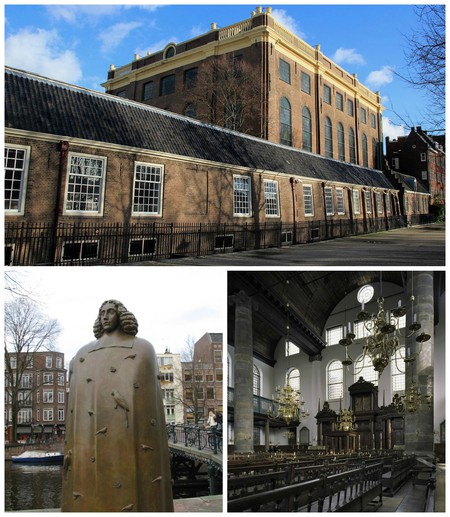 Many famous Jewish people have worshipped at the Portuguese synagogue in Amsterdam and it has always been a centre of learning. Its main temple is attached to one of the oldest Jewish libraries in the world and houses exceptionally rare religious texts.

The radical philosopher, Baruch Spinoza, grew up around the synagogue and was attacked on its steps by a knife-wielding assailant in 1654. Two years later, Spinoza was expelled from the synagogue for his heretical beliefs and was excommunicated from Amsterdam’s Jewish community.

The synagogue survived the Nazi occupation of the Netherlands and was returned to Amsterdam’s Jewish population after the war. Today it is open to the public and remains a vital part of the city’s Jewish quarter.