8 Things You Should Know About Baruch Spinoza 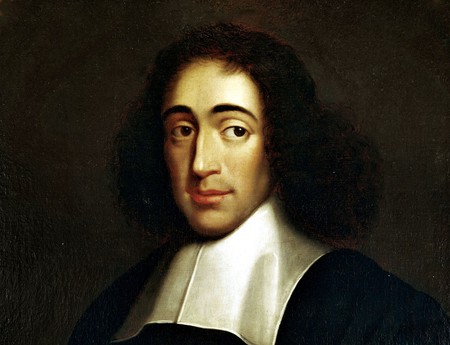 Baruch Spinoza is among the most influential modern philosophers and his monumental contributions to the field laid the groundwork for many other likeminded thinkers. Spinoza was born and raised in Amsterdam by a Sephardic Jewish family and is commonly considered to be the most important Dutch philosopher to have ever lived. Here are some facts about this fascinating figure, that relate to his beliefs, relationships and life in the Netherlands.

Came from a family of Portuguese immigrants

During the 16th century, Jewish people living on the Iberian Peninsula were constantly threatened by the Spanish and Portuguese Inquisition. Instead of converting to Christianity or facing severe punishment, many decided to emigrate and settled in other states around Europe. Spinoza’s Portuguese grandparents originally moved to Nantes, but were expelled from France in 1615. Afterwards, they fled to the Netherlands, due to the country’s tolerance of Judaism.

Like many other Jewish families in Amsterdam, Spinoza’s parents lived in a house inside Jodenbuurt, near the area which would later become Waterlooplein. After his family left this building, it was purchased by a clandestine congregation of Catholics, who were forced to practise their faith in secret due to the ongoing ban on their religion upheld by the Protestant Dutch government. Eventually, this house was converted into the Mozes en Aäronkerk– a monumental Catholic cathedral that is still standing today. 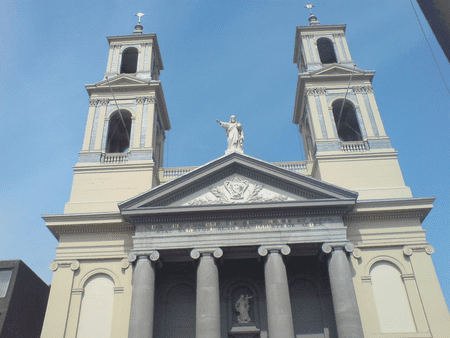 An unknown assailant attacked Spinoza with a dagger

As a young man Spinoza had already began to form radical philosophical views that were at odds with Jewish and Christian beliefs. He argued that God possessed a physical body that was expressed through the material world – an idea that was considered heretical by both faiths. After clashing with several people, Spinoza was attacked outside a synagogue in Amsterdam by an unknown man wielding a short knife. Although he escaped unharmed, Spinoza was traumatised by this assault, and often wore his damaged cloak as a reminder of his brush with mortality.

At the age of 23 Spinoza was banished from Amsterdam’s Jewish community, supposedly for espousing and disseminating heretical beliefs. To effectively excommunicate the young Spinoza, the leaders of Amsterdam’s Sephardic Jewish congregation issued an official censure against him. This document was exceptionally harsh and stated that no one should communicate with him, read anything written by his hand, or provide him with sanctuary. Amsterdam’s City Archives has a copy of this original edict and usually has the censure on display at its main, permanent exhibition. 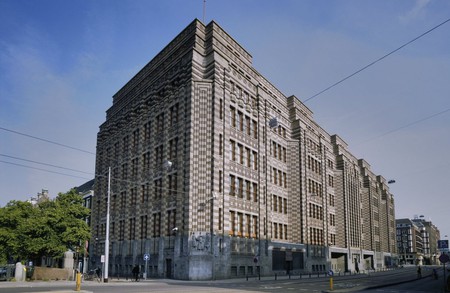 His excommunication was probably politically motivated

In the 17th century, Amsterdam’s Jewish community lived in fear of persecution and worked hard to maintain their reputation amongst the city’s Christian population. As most had fled from the Inquisition, they were wary of drawing unwanted attention to themselves and worried that dissidents or agitators would upset the uneasy relationship they shared with Amsterdam’s authorities. In his published works Spinoza clearly rejects the tenets of orthodox Judaism, and by extension, Christianity, meaning that his excommunication may have been issued in order to ensure that Amsterdam’s Jewish community would not be targeted for harbouring heretics.

Spinoza was not an atheist

After his banishment, Spinoza left Amsterdam and continued to work on his philosophy. For the rest of his life he was branded an atheist and chastised for his views. While Spinoza certainly disagreed with orthodox theology, he maintained theistic beliefs, and the term atheist was generally used during this period as an insult directed towards religious outcasts. Unlike most of his contemporaries, Spinoza denied that the Torah or Bible were authored by God and argued that humans constantly experienced the divine through their perception of reality. 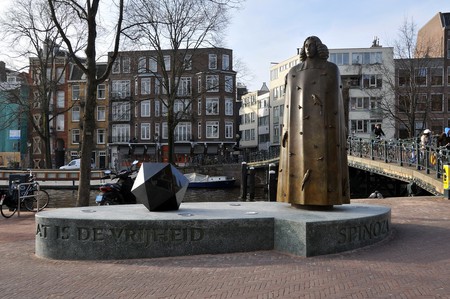 Spinoza believed that suffering was caused by misunderstanding

For Spinoza, the world is completely determined and human existence is devoid of genuine free will. According to his philosophy, the chain of cause and effect is inescapable, meaning that the future is already set. While this may sound extremely gloomy, Spinoza provides his readers with an alternative to fatalism. In his most revered work, The Ethics, Spinoza argues that by accepting that the world is predetermined humans can avoid misery, as studying and understanding the laws that dictate existence allows people to become mentally closer to reality and more prepared for life’s inevitable hardships.

He worked as a lens grinder for most of his life

Although several academics were aware of Spinoza’s groundbreaking philosophy, his ideas remained relatively unknown during his lifetime. In fact, after his troubles in Amsterdam, Spinoza generally kept a low profile and refused to publish his writings. To make a living, he worked as a lens grinder and made delicate scientific instruments. His lenses were fabled throughout the Netherlands and Spinoza’s apparatus was prized by famous Dutch scientists such as Christiaan Huygens and Theodor Kerckring. Unfortunately, Spinoza’s occupation meant that he was constantly inhaling small particles of glass, which may have contributed to the severe case of lung disease that eventually led to his untimely death at 44. 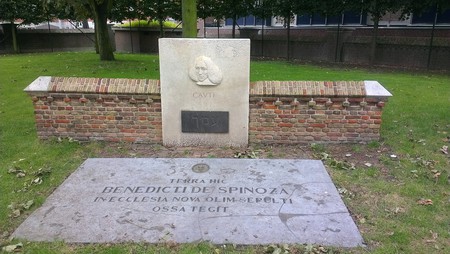 Spinoza’s grave in Den Haag | © Robert / Flickr
Give us feedback