10 Dutch Musicians You Should Be Listening To 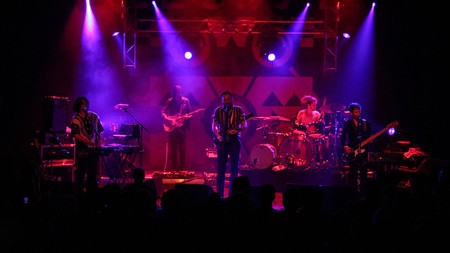 To keep you informed about the current condition of European music, Culture Trip has put together a list of contemporary Dutch recording artists. These bands, rappers, and producers are all at the top of their game and make tracks which appeal to a large spectrum of musical preferences.

Renowned Dutch electronic musician Bas Bron started to produce under the alias Fatima Yamaha over a decade ago and has since created an impressive back catalogue of slow-burning melodic dance tracks. As Fatima Yamaha, Bron’s music escapes easy categorization and regularly sways between electronic genres while occasionally lifting audial gestures from early 1990s video games.

Rotterdam natives Iguana Death Cult make riff-heavy garage rock with a psychedelic edge. Their music has an infectious energy which is helped along by the band’s charged vocals, crashing drums, and reverberating guitars.

Dollkraut’s tracks appeal to a peculiar sense of nostalgia that is caught somewhere between 1980s synth-laden film scores and old-school acid house. His analog-driven production is guided by heavy, warped bass lines and the haunting whispers of electronic chimes or keys – elements that recall a bygone era of electronic music.

De Staat recently completed a tour alongside indie legends Muse, and like their British counterparts, they make heavy-hitting rock anthems that demand mosh pits and headbanging. The band released their fifth studio album, featuring some of the catchiest guitar riffs of the past decade, earlier this year.

Over the past five years, My Baby has been developing a distinctive style that fuses the rhythmic echoes of classic Blues with funk-influenced grooves. With their latest EP, Remedy II, the band has taken a darker turn and created several hypnotic, languished tracks that recall the more foreboding variants of American desert rock.

BEA1991‘s dreamy electronic pop music has won over plenty of people this year, including Blood Orange’s Dev Hynes. The Amsterdam-based songstress has a keen ear for minimalistic production and has put together a number of mesmerizing tracks that are guided by her compelling vocals.

Indie rockers Eerie Wanda released their first full-length studio album this year and recently returned from an American tour where they played alongside the likes of CocoRosie and Thee Oh Sees. The band’s swaying melodies are steeped in deep, bittersweet tones and work beautifully against their guitar section’s jarring riffs.

Ronnie Flex has been producing his own tracks since he was 14 years old, and over the past few years, he started working under the biggest hip-hop label in the Netherlands, Top Notch Records. His recent collaboration with Lil’ Kleine topped the Dutch charts for 14 consecutive weeks, becoming an international hit.