10 Artworks By Vermeer You Should Know

Born in 1632, Johannes Vermeer cemented himself as an important piece of Dutch art history in the relatively short life he lived. His paintings depict not scenes of grandeur, but instead relatable scenes of everyday middle class life. They may look foreign to us now, but what they’re really doing is giving us a window into the lives normal people would have lived 400 years ago. Here are ten Vermeer paintings not to miss.

Diana and her Nymphs

To see the full course of Vermeer’s development as an artist, you have to start with Diana and her Nymphs, which is likely his first painting that still exists. It’s unusual for a Vermeer, as it depicts a scene from Roman mythology instead of a middle class Dutch scene; however, instead of showing Diana with her usual happy spirit and fancy regalia, she appears as a young woman surrounded by a group of companions. The solemn mood — each girl, though in a group, somehow appears quite lonely — gives this painting another level of interest. 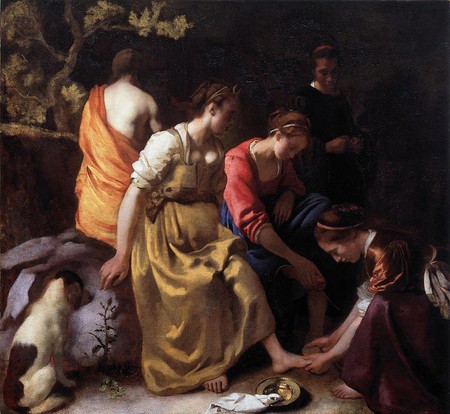 Girl with a Pearl Earring

Girl with a Pearl Earring is Vermeer’s most iconic painting nowadays, thanks in part to the historical novel and then film of the same name that were produced in 1999 and 2003, respectively. Besides having a subject who looks remarkably like Scarlet Johansson, the painting is striking for numerous reasons. Who is the girl, looking so plaintively out at the audience from over her shoulder? Why is she dressed in such an exotic fashion for the time? How did she come by something so dear as the pearl earring (which some have speculated is actually more likely to be made of polished tin)? The painting is displayed in the Mauritshuis in The Hague if you’d like to go ponder these questions in person. 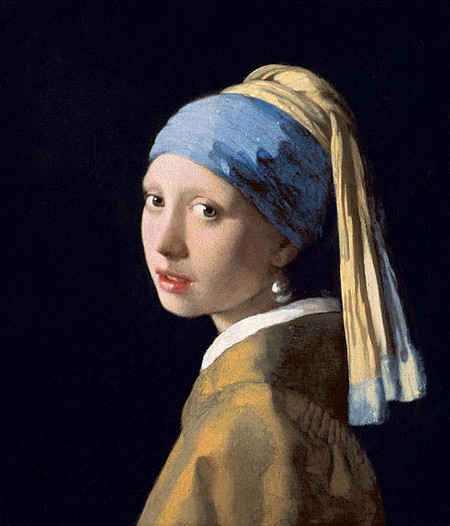 The Allegory of Painting

The Allegory of Painting, also called The Art of Painting, is notable in many respects. For one thing, it is Vermeer’s second largest work, and it is the most complex in terms of iconography and composition. One of the most impressive elements is his use of light; all of it is clearly natural, lighting up the space just as an open window shining onto it would. There are also numerous historical symbols in the painting, like a double-headed eagle at the top of the chandelier. The Nazis were very interested in obtaining it, which some say is thanks to the historical symbolism. 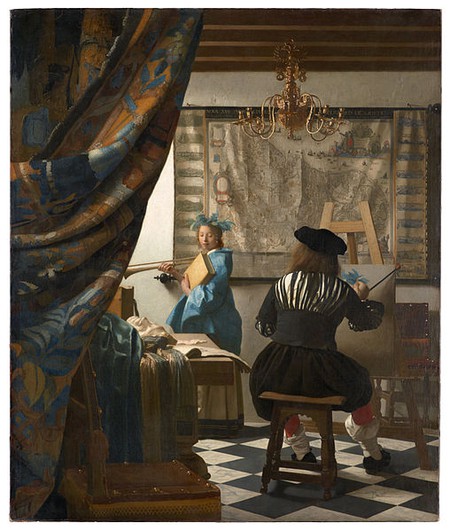 The Allegory of Painting | @ Wikimedia Commons

Vermeer did most of his painting inside with human subjects, so The Little Street is notable for both its subject matter and the fact that it is the only one that he painted outside. The buildings he chose to put into this small painting seem unremarkable, but the geometric composition and starkly contrasting colors of the piece really make it come alive. While there has been much research concerning the exact location of the buildings, he likely chose this street and these buildings because his aunt, mother, and sister all lived there. 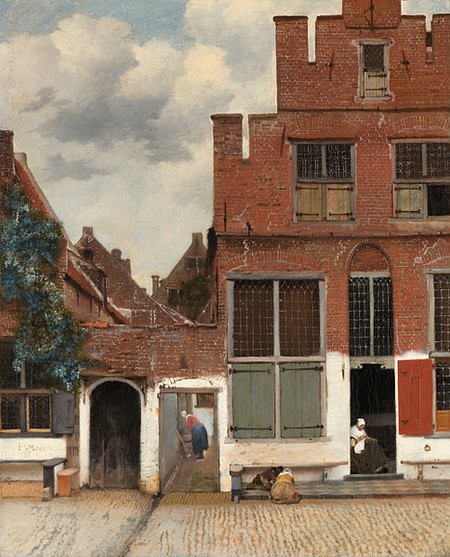 The Music Lesson, which you can find in the Royal Collection in St. James’s Palace in London, shows a very typical Vermeer scene — although it was not correctly attributed to him until 1866, over 200 years after he painted it. It shows a young woman receiving a music lesson from an older teacher who stands next to her regarding her with a watchful eye. This painting acted as a test case for Vermeer’s techniques in the 2013 documentary Tim’s Vermeer, wherein the documentary maker attempted to figure out whether or not Vermeer used optical devices for his painting. 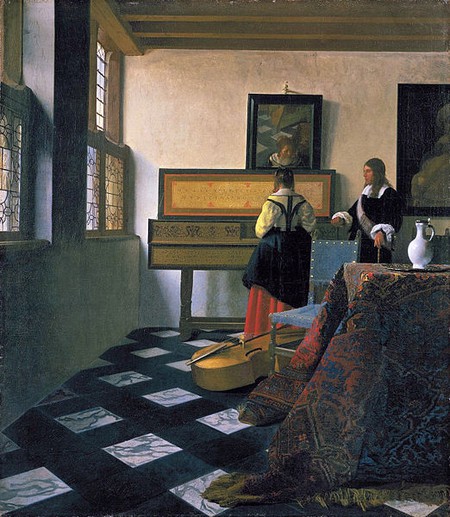 In View of Delft, Vermeer offers a rare full view of his home city. Cityscapes were not the most popular type of painting at the time, which adds to its uniqueness. The painting is not overly large — just over one square meter — but it gives insight into the city at the time that is likely impossible to get anywhere else. His regard for his hometown is clear in the way he depicts it in a way that is both beautiful and completely natural. This is another one that you can find in the Mauritshuis, or if you’re a coin collector, you’ll find a version of it printed on gold and silver commemorative coins put out by the Royal Dutch Mint in 2011. 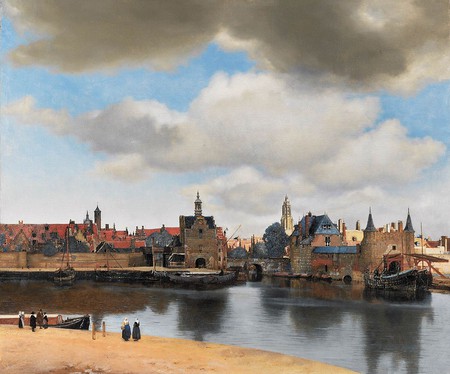 Woman with a Water Jug

Woman with a Water Jug became the first Vermeer painting to make the journey across the Atlantic to the United States, which it did in 1887. Now, you can still find it at the Metropolitan Museum of Art in New York City. This painting provides an exquisite example of how simplicity can blossom into beauty, as its subject is just a normal girl standing by a window with a jug of water, as the name suggests. Her surroundings show various aspects of everyday life — a tablecloth, a platter for the water jug, blue material draped over a chair — and all of them come together to somehow produce something more. 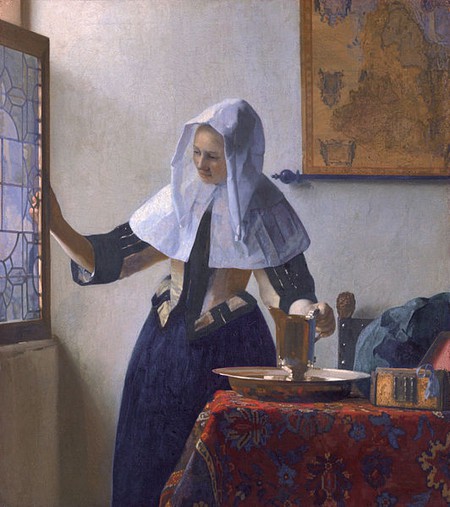 In The Astronomer, Vermeer follows the popular trend in 17th-century Dutch painting of depicting scientists at work. The astronomer in question is looking at a globe of the heavens, but a number of objects in the room point to Vermeer’s focus on religion as well. The book on the table urges the scientist to look for “inspiration from God,” and the painting on the wall behind him shows a scene with Moses. The painting, which now resides at the Louvre in Paris, has a scar from its somewhat turbulent history — the Nazis seized it from the Jewish Rothschild family in 1940 and stamped a swastika onto the back of it. 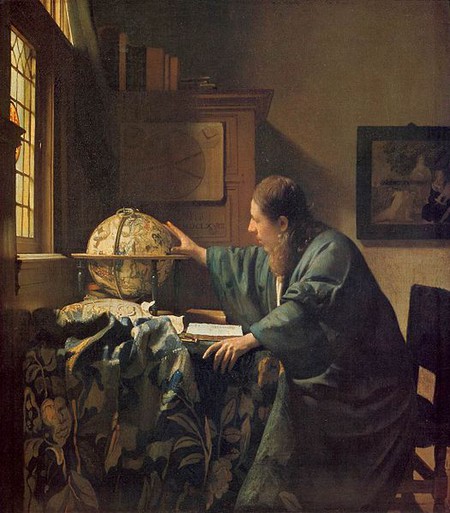 The first thing you’ll notice about The Wine Glass is the bright coloring. Everything seems to jump out of the painting, almost too bright to be real — the stained-glass panels on the windows, a blue curtain illuminated by the sun, the woman’s red dress, the gold frame on the back wall. Vermeer likely painted this when he was only about 27, which reveals an extraordinary maturity in a painter so young. The scene itself provides plenty of questions for the one looking at it — what is the relationship between the two people? Why do they both look so subtly tense and uncomfortable? 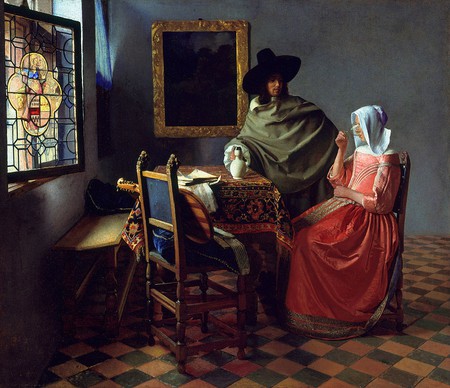 The Allegory of Faith

The Allegory of Faith, one of Vermeer’s later works, has a number of similarities with the aforementioned Allegory of Painting, namely that they are his only two works that so explicitly have deeper, complex meanings and symbolism. The Allegory of Faith, however, takes a leap into Baroque painting with the dramatic pose of the woman portrayed there, and the painting is packed with religious iconography. This ranges from the very obvious, like the large painting of Christ on the cross behind her, to the slightly less so, like the crown of thorns placed on a book and the golden apple and squashed snake on the floor.