The great pioneer of Modernist architecture, Le Corbusier has created a multitude of stunning buildings across the world – from France to India, the USA and back. Here we take a look at ten extraordinary examples of his work, which every architecture lover should know.

Building
Add to Plan
Villa Savoye is arguably Le Corbusier’s most renowned work, and a prime example of Modernist architecture. The sleek geometry of the white living space, with its elongated ribbon windows, is supported by a series of narrow columns around a curved glazed entrance – and topped with a solarium. Completed in 1931, this building was revolutionary: the use of reinforced concrete required for fewer load-bearing internal walls, allowing for an open-plan design.
More Info
Open In Google Maps
82 Rue de Villiers, Poissy, Île-de-France, 78300, France
+33139650106
Visit website

Church
Add to Plan
Chapelle Notre Dame du Haut | © Valueyou/WikiCommons
Iconic Notre Dame du Haut is one of the earliest Modernist churches. It is not a total departure from traditional church architecture, with its stained glass, tower and high ceilings, symbolically drawing the eye – and the mind – towards heaven. However, the southern wall is most remarkable, beginning as a narrow point on the eastern edge and expanding outwards to ten feet of thickness as it curves around. Each window is cut through the wall in different sizes and angles, scattering ethereal colored light across the room.
More Info
Open In Google Maps
13 Rue de la Chapelle, Ronchamp, Bourgogne-Franche-Comté, 70250, France
+33384206513
Visit website

Museum
Add to Plan
Villa Jeanneret & Villa La Roche are two semi-detached houses commissioned in 1923-25, and now house the Le Corbusier Foundation. Due to contemporary building regulations, windows were limited, so light courts, a roof terrace, and skylights were introduced to harness the natural light available. The sleek white exterior with dark framed ribbon windows is similar to that of Villa Savoye, but the asymmetry of the structure – with a curving roof terrace evoking the deck of a ship – gave it new freedom.
More Info
Open In Google Maps
8-10 Square du Docteur Blanche, Paris, Île-de-France, 75016, France
+33142884153
Visit website

Building
Add to Plan
Pre-9/11 view of Manhattan | © Lars Plougmann/Flickr
The meeting place of world leaders, the United Nations Headquarters is a building with status. The imposing rectangular tower is dominating, yet dignified. Surrounded by the skyscrapers of New York, this building needed to stand out: blue-tinged glass reflects the water below, while the two windowless concrete walls give the building a refined status of solidarity and endurance, which are key aspects of the United Nations.
More Info
Open In Google Maps
Manhattan New York, New York, 10017, USA
+12129634475
Visit website

The colorful structure of the Palace of Justice is a prime example of Le Corbusier’s work in India. With a curving roof similar to Notre Dame du Haut, the regularity of the arcade gives the building gravity and solidity. The geometric apertures of the windows resemble traditional Indian fretwork, creating a texture that contrasts with the smooth faces and tactile curves of the roof. Red, yellow, and blue, combined with the colors of the Indian flag, complete this balanced and harmonious building. 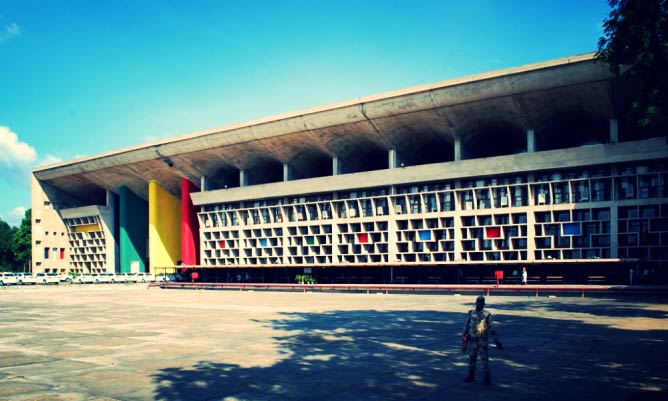 The Palace of Assembly is the elegant counterpart to the nearby Palace of Justice. Set beside an azure pool, this busy place nevertheless evokes serenity and reflection. There is a regularity to the building, with few deviations from the design system. A flat-roofed block with rectangular windows is hidden behind a monumental facade, with a U-shaped roof piercing the severity of the concrete. More sedate than the colorful Palace of Justice, its equilibrium of form and symmetry nevertheless makes the Palace of Assembly an equally-striking building.

Building
Add to Plan
Mill Owners' Association Building | © Sanyam Bahga/WikiCommons
After Le Corbusier began his work in Chandigarh, he began to create a new headquarter for the Mill Owners’ Association. While there are few curves in this building, the slanting walls beside the small, domestic windows give depth to the texture of the building. The structure does not appear dominating or austere, but warm, welcoming and full of life. The verdant location and integrated foliage are vital to creating a healthy atmosphere.
More Info
Open In Google Maps
Ashram Road, Vishalpur, Muslim Society, Navrangpura Ahmedabad, Gujarat, 380009, India
Visit website

Church, Library
Add to Plan
Sainte Marie de la Tourette is a Dominican priory, considered one of the most important works of Modernist architecture in the world. There are 100 bedrooms, various halls, a library, a refectory, a courtyard, cloisters and a church. The refectory and cloister form a symbolic cross leading to the church. There is also symbolism in the rough finish: it is functional, tough and unrefined, but this helps create a harmony in the buildings, compatible with the life of those within.
More Info
Open In Google Maps
Route de la Tourette, Éveux, Auvergne-Rhône-Alpes, 69210, France
+33472191090
Visit website

Building
Add to Plan
Interior Saint-Pierre, Firminy | © Kamalpassi2102/Courtesy of WikiCommons
The last major work of Le Corbusier, the building was completed posthumously in 2006 – 41 years after his death – by his student José Oubrerie. The great cone rises from the land like the surrounding mountains, and while the exterior is plain concrete, unanticipated beauty awaits inside. Le Corbusier’s innovative use of windows is epitomized in Saint-Pierre, with strips of windows in primary colors and a projection of circles akin to constellations in the night sky. The space is a cave that embraces the visitor like a womb – a sanctuary in the turbulent world.
More Info
Open In Google Maps
29 Rue des Noyers, Firminy, Auvergne-Rhône-Alpes, 42700, France
+33477610872
Visit website