This 72-Hour Long Carnival is Dark, Funny and a Must-Visit 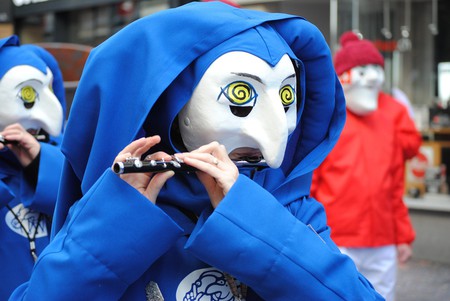 This Swiss carnival is not for the faint-hearted, nor for the easily weary. The annual Fasnacht winter festival is a marathon event that starts at 4am on the first Monday after Ash Wednesday to the sound of piccolos and drums, before winding up at 4am the following Thursday.

If you can brave the cold and early awakening you’ll be able to witness the Morgestraich, or the beginning of the carnival. The city’s old town goes dark as the streetlights are turned off and the only light you’ll see is that from lanterns carried by the marchers who begin playing at 4am.

For the next three days, the streets of Basel’s old town are invaded by the Fasnächtler, costumed musicians who lead troops of participants wearing ghoulish masks that look as though they’ve come straight out of a Brothers’ Grimm story.

Throughout the 72 hours the streets are packed with some 18,000 revelers, who come to dance beneath their masks to the sounds of drum-and-fife groups or the brass bands who own the evenings. Others still come to look on and enjoy the warm, hearty traditional food that’s on offer from the various restaurants or kiosks. Join the locals and gorge on tasty rösti, a speciality of the German speaking side of Switzerland, washed down with warm mulled wine, or a locally brewed beer. 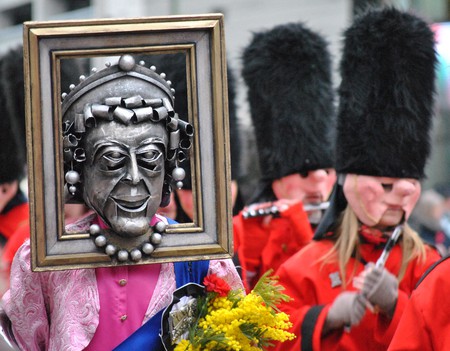 Unlike some other carnivals in Switzerland, Basel Fasnacht is quite clearly separated between the Fasnächtler lot, active participants who wear the frightening masks, and spectators. The Fasnächtler are never supposed to reveal themselves during the entirety of the festivities, so ludicrous behaviour is assured by the hidden marchers.

Alongside the parades are the comics and satirists who pop up here and there on street corners to chant cheerful ditties and poems, many of them sharply political in tone, while others are just plain dirty.

Exactly why Basel’s occupants celebrate Fasnacht isn’t entirely clear. One of the prevailing theories says that an argument between city folk and knights over a jousting tournament in 1376 led to a fight. During the melee, four noblemen were killed and the rest scarpered from the angry mobs. In retribution, the Emperor Charles IV, of the Holy Roman Empire, placed a ban on the city which threw it from under his protection and as further punishment, 12 citizens of Basel were beheaded. This became known as the Böse Fasnacht, which morphed over time into Basler Fasnacht.

The carnival is one of Switzerland’s most famous and is always incredibly popular amongst the Swiss and tourists alike. Make sure you don’t miss out.