Top 10 Things To See And Do In The Jungfrau Region, Switzerland

If you only visit one part of Switzerland, make it the Jungfrau Region. The iconic mountain landscape has world-famous Alpine peaks, thundering waterfalls, large glaciers, and vast meadows, and are plenty of unforgettable activities to enjoy in all seasons. Here is our pick of the top 10. 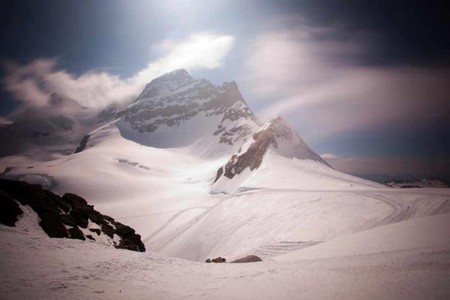 The Jungfraujoch boasts one of the most famous European peaks and the highest railway station on the continent (hence the phrase ‘Jungfrau’, meaning ‘Top of Europe’). The track leads through the mountains of Eiger and Mönch, up to incomparable panoramas of the surrounding peaks and the Aletsch Glacier. The Jungfraujoch is also home to the space-age-like weather station, appropriately named The Sphinx, which contains restaurants, souvenir shops, indoor viewing terraces, and the ice palace. The ice palace was carved entirely by hand, the entire 1,000 square metres being chiselled painstakingly with an ice axe and saw, and is a spectacular sight.

Between the Jungfrau and the Mönch

Most famously known as the filming location of the James Bond classic On Her Majesty’s Secret Service, Schilthorn is an iconic peak on the Jungfrau skyline. The revolving restaurant of Piz Gloria is where the scenes were filmed, and die-hard Bond fans can also visit the interactive James Bond exhibition. If you prefer to act out the spy’s most famous exploits, the mountain also has the Inferno Run between Schilthorn and Mirren; it is a difficult slope for amateur skiers.

Take the gondola from Mürren-Schilthorn

The World Snow Festival is a January highlight in the town of Grindelwald. Famed and up-and-coming international artists flock to the area to build massive metre-tall ice sculptures out of snow blocks. These are subsequently showcased on the natural ice rink in the town. Don’t miss the larger-than-life sculptures of animals, or the beautiful pagodas.

Switzerland is a country of waterfalls, but few are as impressive or unique as the Trümmelbachfälle, a series of 10 glacier falls, inside a mountain and accessible underground by a series of lifts, pathways and tunnels. It feels like a real adventure, surrounded by the thundering subterranean crash of the water as it plunges down from the glacier.

With it’s traditional timber houses and car-free streets, Wengen is a trip back into the beginnings of Swiss tourism. The holiday resort sits on a sunny platform at the foot of the Jungfrau, overlooking the stunning scenery of the Lauterbrunnen Valley. In winter, it’s a hot spot for skiers, while summer see hikers, climbers and sightseers ascend via the railway to this little oasis of calming Swiss charm.

Wengen, on the Jungfrau

The Ballenberg Open Air Museum showcases Swiss history in an interactive historical village. Original century-old Swiss houses and farms from various parts of Switzerland are on display, each with its own regional architecture. The museum aims to show the traditional Swiss lifestyle, with craftsmen demonstrating skills such as hat-making or weaving, gardens of vegetables, herbs, medicinal plants, and more than 100 farm animals in the area. Ballenberg should be seen over the timespan of a few days, as it is too large to be properly viewed in one.

You can’t come the Swiss mountains without taking advantage of the snow. The Snowpark Bärgelegg has a variety of slopes for individuals of any ability. There are rails, boxes, jibbs, as well as big and small kickers. Skiing here also affords some of the most gorgeous views in the Jungfrau region. There is even a special Snowpark for kids, right by the ski lift: it is called the White Elements Snowpark. There are play areas for smaller children, as well as ski slopes for those who are advanced skiers. In short, there’s something for everyone. 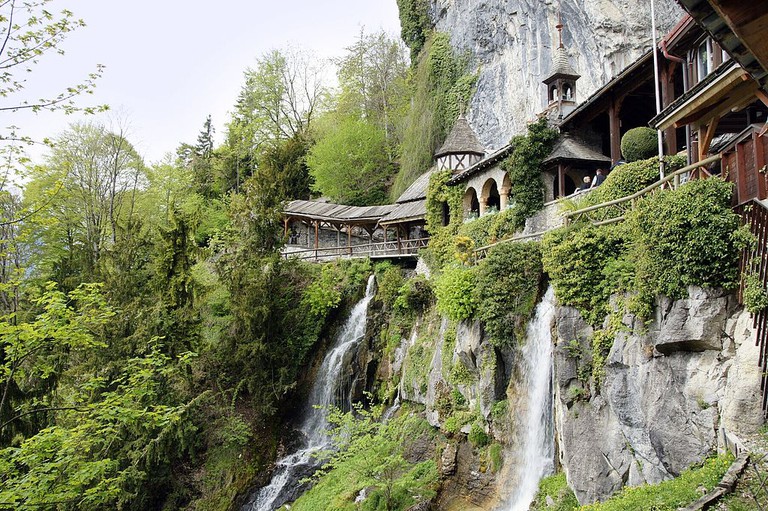 St Beatus Caves | © Fafner/WikiCommons
The St. Beatus Caves are an easily-accessible excursion from the Jungfrau Region, located on the eastern shore of Lake Thun. The caves are named after the legendary Saint Beatus, who is said to have killed the dragon living inhabiting them. Filled with limpid pools, chiselled gorges and waterfalls, these limestone caves are a wanderer’s delight. There are several formations of stalactites and stalagmites, lending every new turn a magical, fairy-like air, and the sight is worth a trip.

Grimselpass is a mountain pass that leads directly into the Jungfrau region, and links the Hasli Valley with Goms in the canton of Valais. The scenery is wild, sparse, and rugged: a mountainous region with few trees (if any). There are sky-reflecting reservoir lakes and dams, but the landscape is otherwise dominated by hydroelectric power plants and pylons, reminescent of the Norwegian Fjell area. This area is best explored by car, as the walking trails may sometimes be closed off, and the car routes are well-situated with frequent stopping areas. 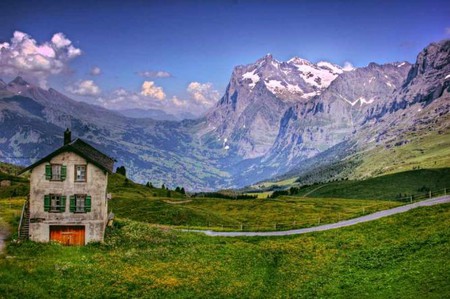 The Panoramaweg is a hiking trail from Männlichen to Kleine Scheidegg, which, true to its name, shows the most stunning Alpine panoramas. A relatively easy trail, walkable in just an hour and a half, it has a variety of sights. The views are spectacular: you see the great triumvirate of Eiger-Mönch-Jungfrau, as well as the Silberhorn. However, the peaks are not the only thing to marvel at here; there are also several Alpine floral varieties, cows grazing alongside the path, and occasionally even yodelling. It is quintessential Switzerland at its loveliest.