The Top 10 Things to See and Do in Montreux, Switzerland 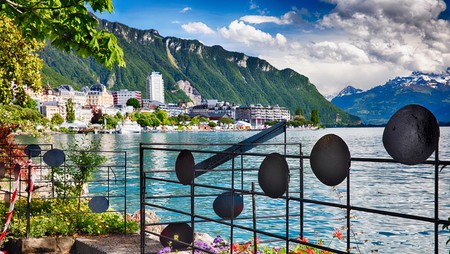 Set against the stunning backdrop of the Swiss Alps and nestled on the shores of Lake Geneva, Montreux has attracted an impressive list of past visitors. The likes of Mary Shelley, Lord Byron and Charlie Chaplin chose to frequent this beautiful lakeside resort in Switzerland, and not surprisingly, given the cultural attractions and sporting activities on offer there. Read our guide to the 10 best things to see and do in Montreux. 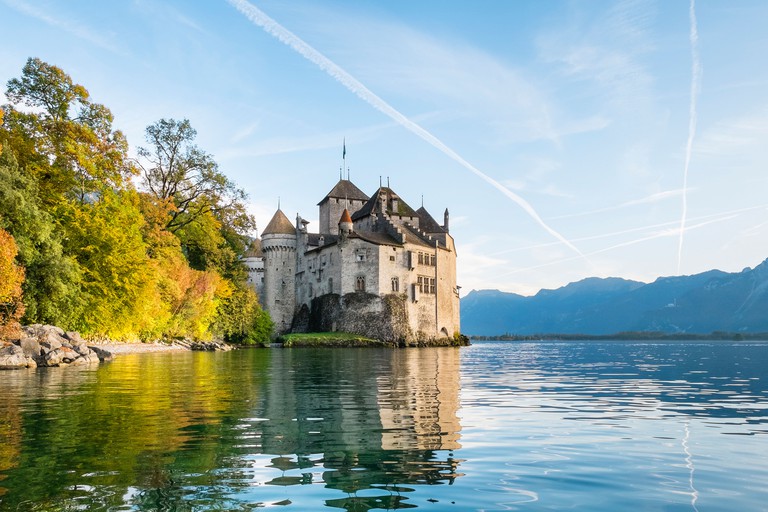 This 13th-century fortress is Switzerland’s most visited historical building and graces postcards and books about the country’s sights. Originally owned by the House of Savoy, the castle houses several medieval frescoes and Gothic dungeons, the latter of which were the subject of a poem penned by Lord Byron, The Prisoner of Chillon. The poet directly references the château in the line, “There are seven pillars of Gothic mould/ In Chillon’s dungeons deep and old.” Explore the haunting interiors for yourself as you soak up the atmosphere of this medieval castle.

Casino
Facebook
Email
Twitter
Pinterest
Copy link
Share
Map View
The Montreux Jazz Festival has a world-famous reputation for its diverse and renowned musical performances. Although it was initially a jazz-only festival, it has since broadened its musical horizons. It is perhaps most famously immortalised in Deep Purple’s Smoke on the Water. The Casino where the Jazz Festival was housed burned down during Zappa’s 1971 performance, sending smoke across Lake Geneva and providing the inspiration for the song. Over the years, it has featured the likes of Miles Davis, Nina Simone and Ella Fitzgerald; post-1970s, it has also featured non-jazz artists such as Pink Floyd, Deep Purple, BB King, Oscar Peterson and many more.
Open In Google Maps
5 Avenue Claude-Nobs, Montreux, Vaud, 1820, Switzerland
+41219622164
Visit Website
Give us feedback

Casino
Facebook
Email
Twitter
Pinterest
Copy link
Share
Map View
The exhibition of Queen: The Studio Experience is aimed at aficionados as well as emerging fans of the rock band Queen. It is held at the Montreux Mountain Studios, where the band created large portions of their most acclaimed albums. There is plenty of Queen memorabilia, such as signatures, photographs and the original handwritten copies of lyrics. The exhibition’s centrepiece is the original sound studio, where Queen’s lead singer Freddie Mercury recorded his last songs.
Open In Google Maps
9 Rue du Théâtre, Montreux, Vaud, 1820, Switzerland
+41219628383
Visit Website
Give us feedback 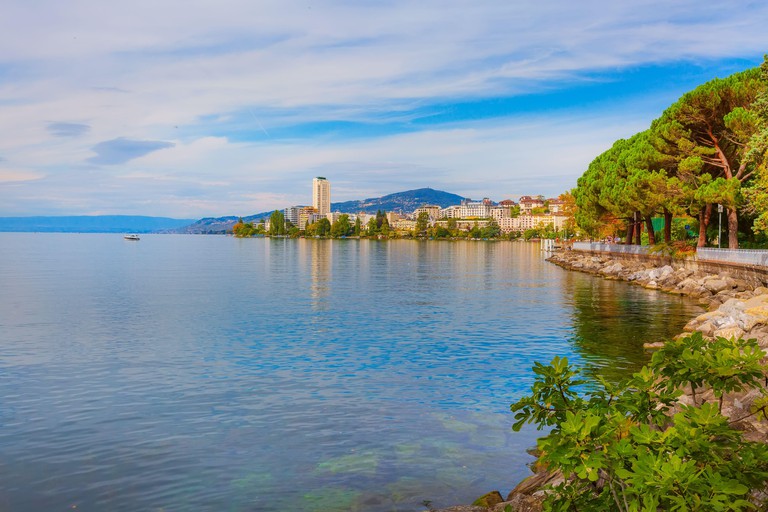 © Nataliya Nazarova / Alamy Stock Photo
The 3.5km (2mi) stretch between Clarens and the Château de Chillon flaunts a variety of lovely blossoms. The promenade is most beautiful during springtime and highly recommended for a relaxed walk along the shoreline while enjoying the view of the Chillon’s postcard-perfect mirroring in Lake Geneva.
Open In Google Maps
2 Avenue Claude-Nobs, Montreux, Vaud, 1820, Switzerland
Give us feedback

Historical Landmark
Facebook
Email
Twitter
Pinterest
Copy link
Share
Map View
Whilst wandering through Montreux’s quaint Old Town, be sure to stop at the Gorges du Chauderon. The river of La Baye de Montreux flows from this starkly chiselled gorge down to Lake Geneva. There are clearly marked trails indicating paths to and from Montreux, as well as trails for further exploring the woodsy enclave.
Open In Google Maps
Montreux, Vaud, 1823, Switzerland
Visit Website
Give us feedback

Train Station
Facebook
Email
Twitter
Pinterest
Copy link
Share
Map View
The lantern trail of Les Pléiades is an unusual choice for a visitor to Montreux, but it’s a must-try in the winter. To get the most out of this experience, take a train from Montreux to the Les Pléiades train station, and follow the trail lit by lanterns. Wear snowshoes on the trail, and explore the hushed and magical wintry landscape by the light of the lanterns. To finish it off, be sure to sample traditional fondue before heading back to Montreux.
Open In Google Maps
Blonay, Vaud, 1807, Switzerland
Give us feedback 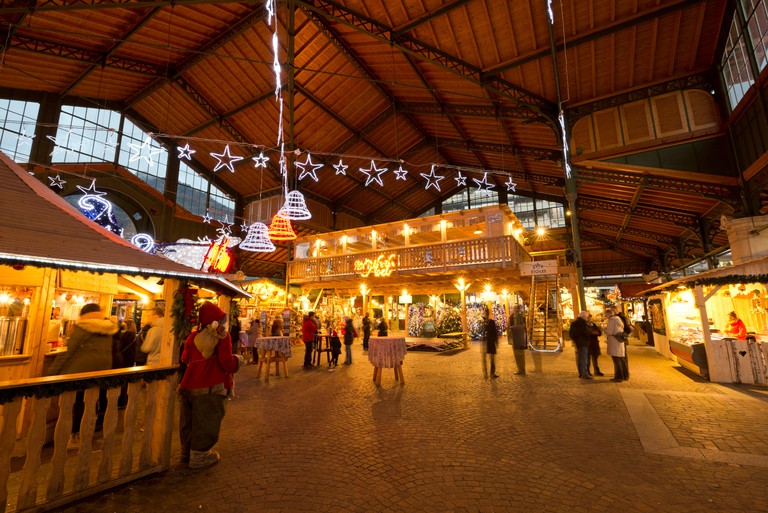 Winter in Montreux means one thing: Montreux Noël. Montreux completely transforms itself in preparation for this Christmas event. For a whole month, the city is decked and decorated to celebrate the festival in style. There are medieval markets, Father Christmas makes an appearance, and the Château hosts a fairytale festival. Nearby Caux also transforms into an authentic and mesmerising portrayal of a Christmas village.

The mountains surrounding Montreux have beautiful narcissus trails to enjoy in the springtime. Use the Narcissi Forecaster to plan your route, and then set off for a day to enjoy the flowery trails in the Alps. Spring in the Alps means beautiful, unusual Alpine floral varieties in every nook and cranny – a photographer’s (and hiker’s) delight.

Open In Google Maps
Blonay, Vaud, 1807, Switzerland
Give us feedback

Natural Feature
Facebook
Email
Twitter
Pinterest
Copy link
Share
Map View
Lake Geneva offers plenty of enjoyable alternatives to hiking. While swimming here is a wonderful experience – you’re surrounded by gorgeous views and stunningly clear water – other options include canoeing, waterskiing, sailing and more. There’s something for everyone of all abilities, and lessons can be easily arranged.
Open In Google Maps
Give us feedback 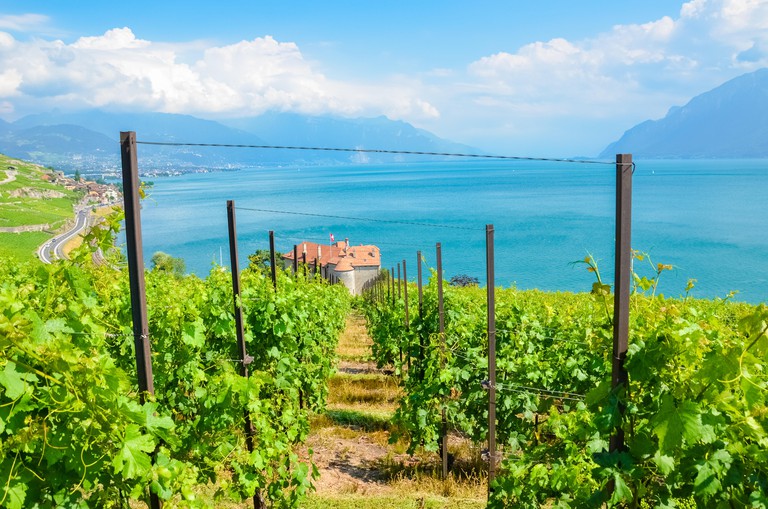 © Petr Pohudka / Alamy Stock Photo
The Lavaux vineyards, a Unesco World Heritage site, stretch an impressive 830ha (2,050 acres) between Lausanne and Montreux. Although the majority of visitors choose to see them via the Lavaux Express or the Lavaux Panoramic tourism trains, there are also well-trodden trails for exploring the vineyards on foot. Wander through the beautiful vineyards and enjoy the magnificent views, with occasional stops at the wine cellars to taste the best of the Lavaux wine. Lavaux sells mostly Chasselas wines, which are dry and aromatic.
Open In Google Maps
Vaud, Switzerland
Give us feedback
Give us feedback