The Best Boutique Retreats and Grand Hotels in Zürich 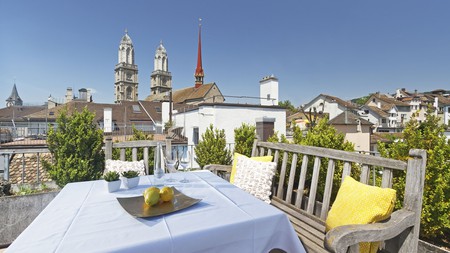 Delightfully refined, the Zürich hotel scene offers a blend of avant-garde boutique properties and grand old residences that provide a glimpse into a bygone era. Here’s our pick – bookable with Culture Trip.

While Zürich’s huge lake has timeless holiday appeal, the streets and churches have seen key moments in Reformation history, and its lively modern cultural scene spans sculpture, music, photography and international art. Today, an ancient inn might be a trendy boutique guesthouse, and a centuries-old mansion can become a postmodern architectural marvel. In a city awash with Michelin stars and innovative cooking, hotel restaurants have worked overtime to hold their own on the culinary front, too. These places to stay will help you explore this Swiss city that blends tradition with pioneering new trends. 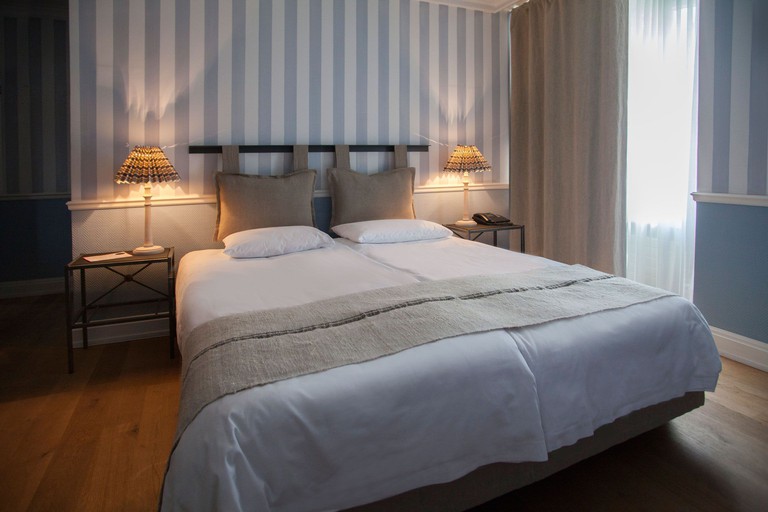 The cheerful courtyard restaurant of this aristocratic 18th-century mansion and former silk factory is full of crimson roses, creamy white parasols, climbing wisteria and an old fountain. Next door to a music school and the statue-studded Rechberggarten and not far from the university, Hotel Florhof occupies a quiet corner in the old town – the Kunsthaus Zürich is just a three-minute stroll away along Heimstrasse. With its antique clocks and tiled wood stove, the hotel does nothing to disturb the time-warped charm of the streets nearby, but the individual rooms feel fresh and light with their striped walls, wood floors and crystal chandeliers. 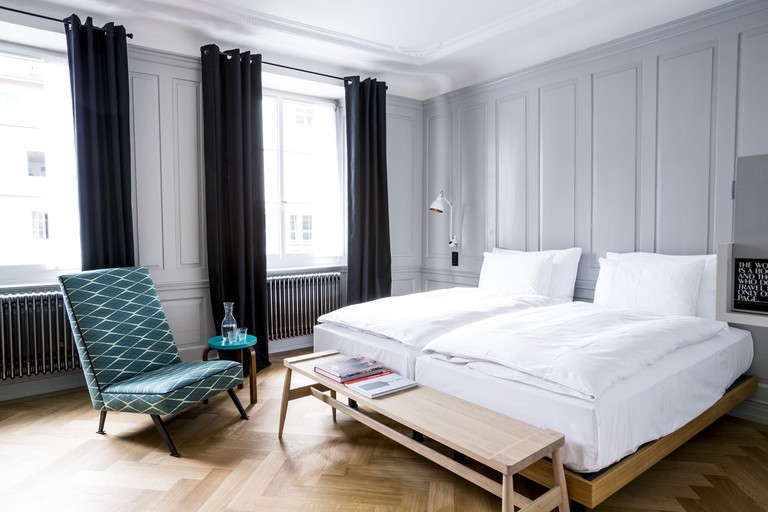 Courtesy of Marktgasse Hotel / Expedia
One of Zürich’s oldest inns re-opened in late 2015 as the 39-room Marktgasse Hotel, overlooking the narrow, history-rich alleys of the old town. Lenin and his wife lived round the corner in 1916 before heading back to revolutionary Russia. Two listed buildings – the oldest dating back to the 13th century – now combine Scandi minimalism with original features such as ornate stucco work, panelled walls and columns. Make a booking for dinner at the Michelin-star Igniv Zurich by Andreas Caminada, or sip artfully crafted cocktails in the dimly lit Igniv Bar. You’ll also have free access to classes, a gym and herbal steam rooms in a couple of relatively local fitness parks. 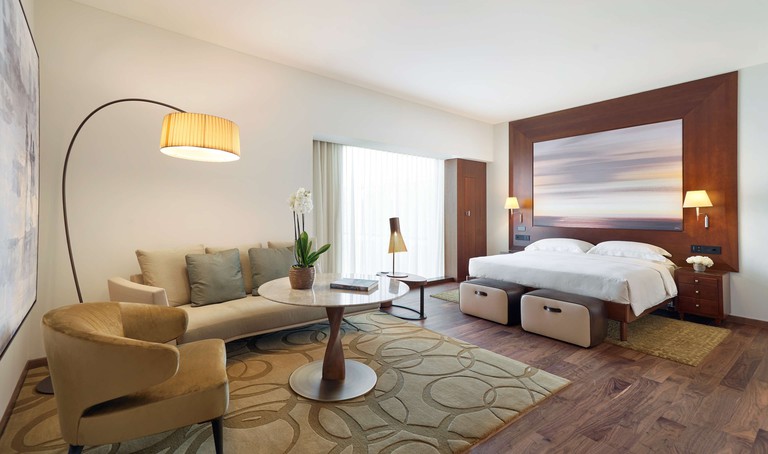 On business-facing Beethovenstrasse, close to the shores of Lake Zürich, the shining glass-walled Park Hyatt opened in 2004 as the first purpose-built luxury hotel in the city. The rooms have huge double-glazed windows and original works of art on the walls – bathrooms are finished in Carrara marble and feature rainfall showers and deep-soaking bathtubs. The food and drink options are equally high-end, including a 3,000-bottle wine library and the lively Onyx Bar, where floor-to-ceiling windows provide views of the summer terrace, and signature cocktails include the Onyx negroni (gin, vermouth, Campari and fruit tea). 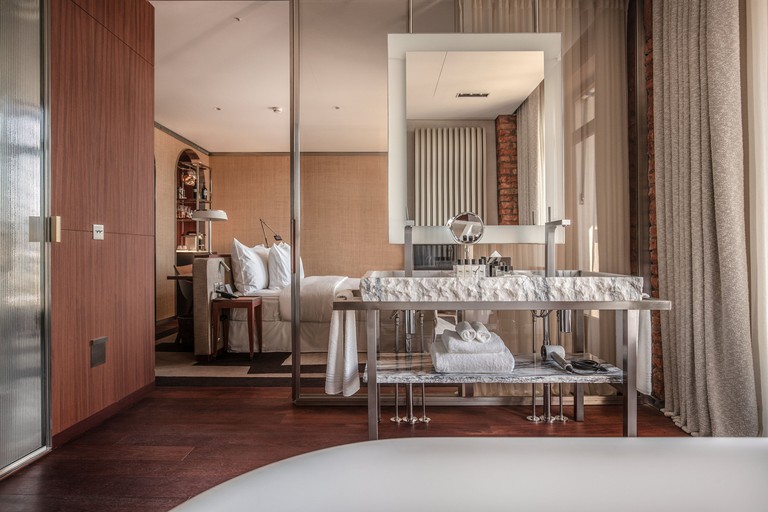 With unrivalled lakeside views, this luxurious, 1909 French Empire-style building reopened in January 2020 after its redesign as an “imaginary yacht club”. Rooms are minimalist, contrasting shiny metal and wood, soft woolly rugs and pale gauzy curtains. Pricier south-facing rooms have a central bed and a private balcony with views of the plane tree-shaded promenade, the sail-sprinkled lake and the distant Alps. The design of the ground-floor kitchen and bar includes oars, boat hulls and a stained-glass window by Ara Starck. Dishes to match the view include barbecued wild sea bass with smoked aubergine and lovage, and Araguani chocolate foam with whisky and hazelnut ice cream. 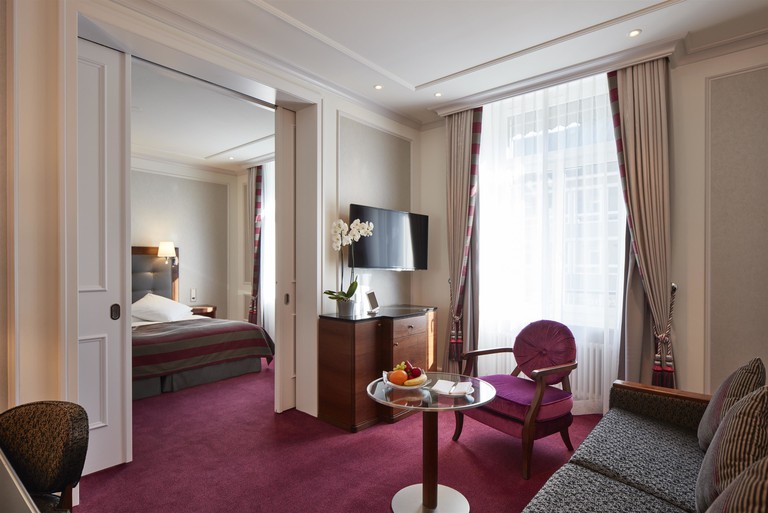 Overlooking the linden-bordered tramlines and exclusive shops of busy Bahnhofstrasse, this stately 19th-century landmark stands opposite Zürich’s railway station, attracting plenty of global travellers. Its elegant art nouveau sandstone facade was added in 1908, while the name Schweizerhof followed in 1918. Colour schemes in the rooms and suites favour cream, crimson and gold. Meals in La Soupière, the hotel’s French-style restaurant, are equally opulent – try the veal escalope with morels before ending with the grand cru chocolate mousse. 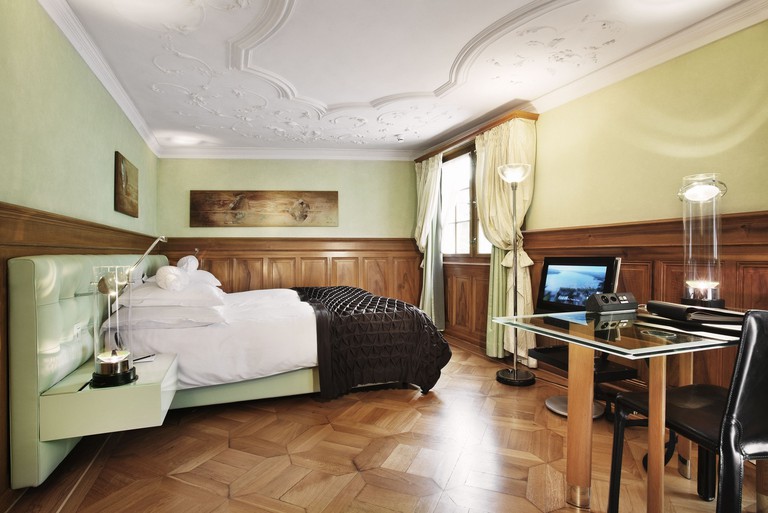 Sandwiched between fancy shops, this boutique hotel in a renovated 12th-century building has 49 rooms, individually designed with authentic tiled stoves, old oak beams, wooden panels, frescos or ornate stucco work. Historical features are matched with modern conveniences, including movement-sensitive lights, Nespresso machines and multimedia TVs. Award-winning chef Stefan Heilemann presides over a menu that also fuses classic and contemporary elements, with unusual combos such as crab and purple curry or rhubarb with black sticky rice. The lime tree-shaded Lindenhof is just round the corner, and colourful Augustinergasse is enticingly close. 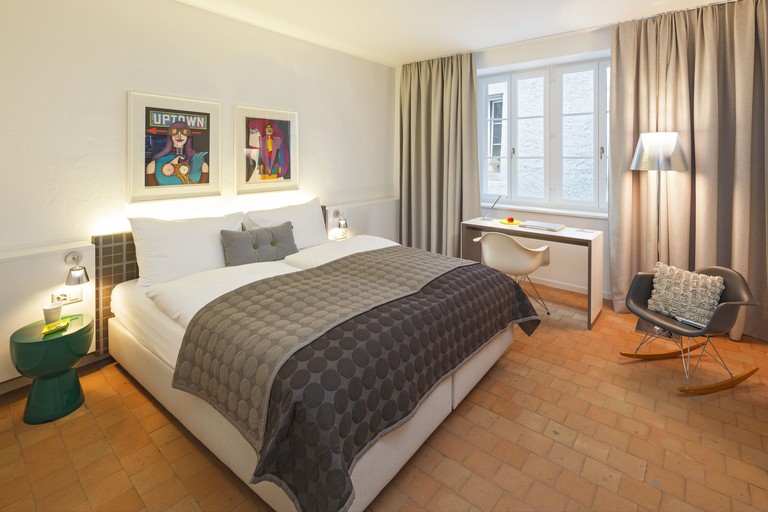 A short walk from the Grossmünster – a 12th-century cathedral – and less than 10 minutes from the Kunsthaus Zürich, full of great Swiss art, Hotel Rössli is in a prime location. The hotel itself also contributes to the city’s cultural traditions. A listed building with contemporary design and an elegant Italian restaurant, mosaic-tiled bathrooms, statement artworks – including miniature horse sculptures – and colourful accents bring this centuries-old building up to date. A ground-floor bar, with chairs out on the narrow cobbles of historic Rössligasse, serves wine by the glass alongside refined snacks and more substantial meals. 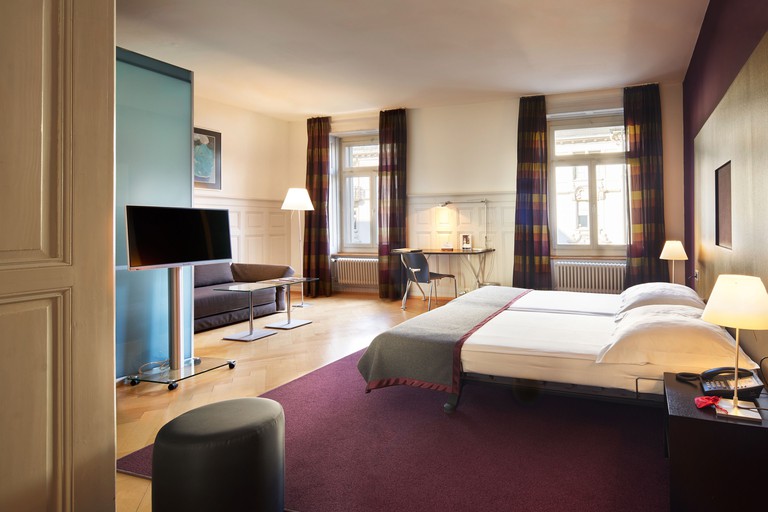 Yoga classes, massages, a women-only spa and roomy suites with big windows all set high standards for relaxation at this female-run villa on Mainaustrasse. The wrought-iron balconies and classic townhouse architecture give way to polished parquet floors and tasteful monochrome walls. Climbing summer roses bloom in the shady courtyard, while in winter the fire-lit lounge and honesty bar beckon. Breakfast features local vegetables, fresh bread, cured meat and cheeses. Seebad Utoquai, a public bath on Lake Zürich, is a five-minute stroll away, and the hotel can lend you bathing gear if needed. 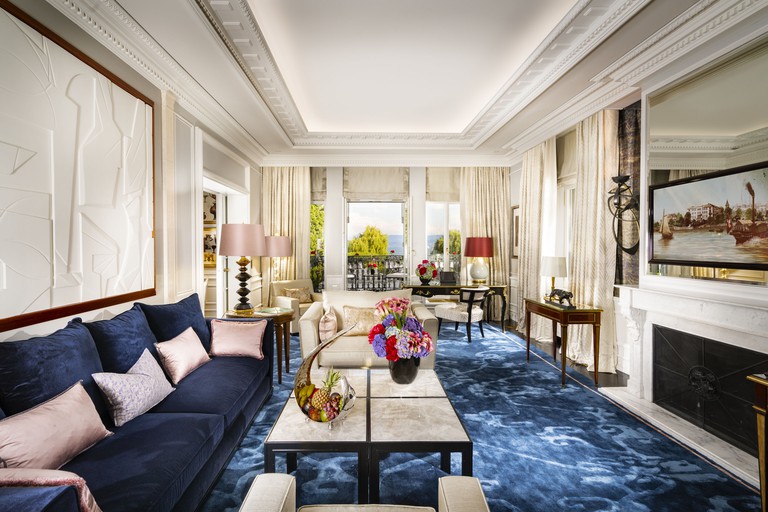 In landscaped grounds at the northern end of the lake and with a sweeping view of the Alps, this swanky hotel was built in 1844. It has hosted famous artists and musicians over the years, including Marc Chagall, Joan Miró, Henry Moore, Plácido Domingo and Elton John. Palatial suites and rooms, some with a view of the swans on the Schanzengraben canal outside, variously channel Regency, Louis XVI or art deco styles and come ready stocked with snacks and beers in the complimentary minibar. The two-Michelin-star Restaurant Pavilion is a light-filled fantasia of velvet chairs and fresh flowers, with chef Laurent Eperon’s artistic, innovative fine dining to match. 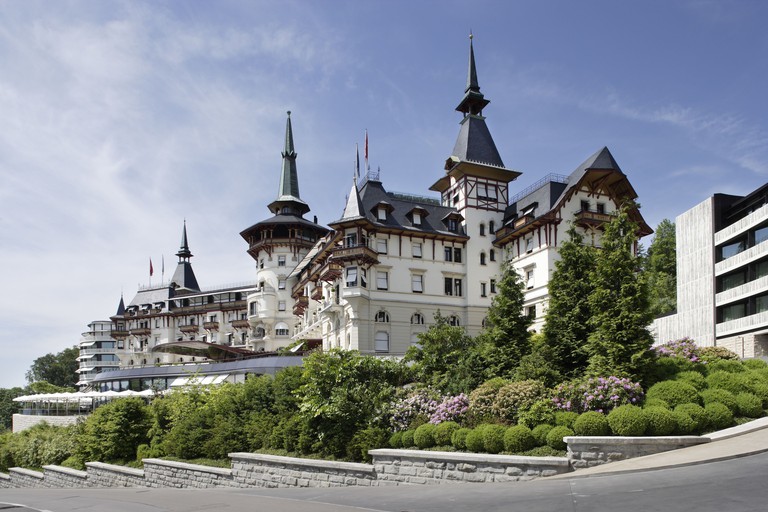 Courtesy of The Dolder Grand / Expedia

This wooded five-star complex above Lake Zürich, with hectares of spas and sports facilities and a local station on the Dolderbahn cog railway, does nothing by halves. It’s part postmodern spaceship, part 19th-century fairytale castle, all turrets and gables, with a terrace boasting panoramic views of Zürich and the Alps. An energy-efficient 2008 extension, designed by Norman Foster’s architectural firm, more than doubled the hotel’s space and reconnected it with the surrounding landscape. It also restored the original red-and-cream colour scheme and created grand new public areas, including a circular ballroom. 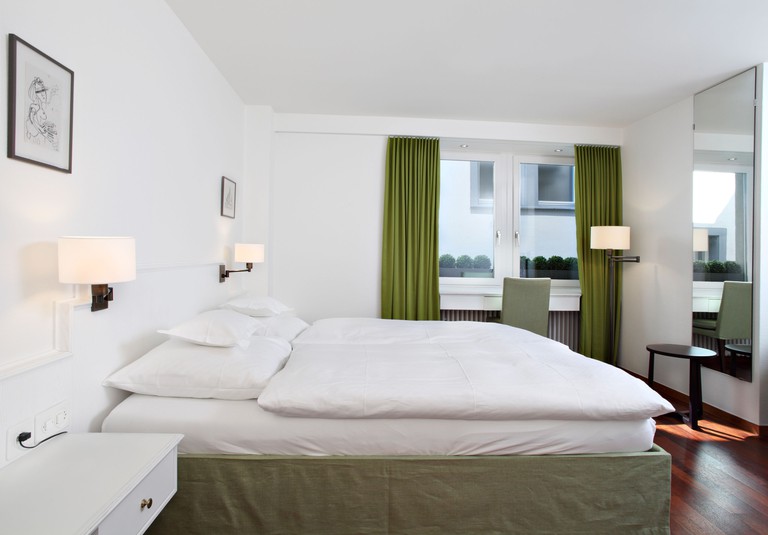 Just over the pretty pedestrianised Münsterbrücke from the ancient Fraumünster Church, with its stained glass by Marc Chagall, this guesthouse can trace its history to the 14th century when the church owned it. A couple of centuries later, the house’s owners saved the Grossmünster’s altar paintings from iconoclasts by hiding them in the home’s panelling. Today’s hotel is named after the nearby Helmhaus gallery, which highlights contemporary Swiss art. The boutique rooms have original artworks by Gisèle Mengis, oak parquet floors and a complimentary continental breakfast featuring coffee from Hochstrasser and bread from Bertschi Bäckerei. 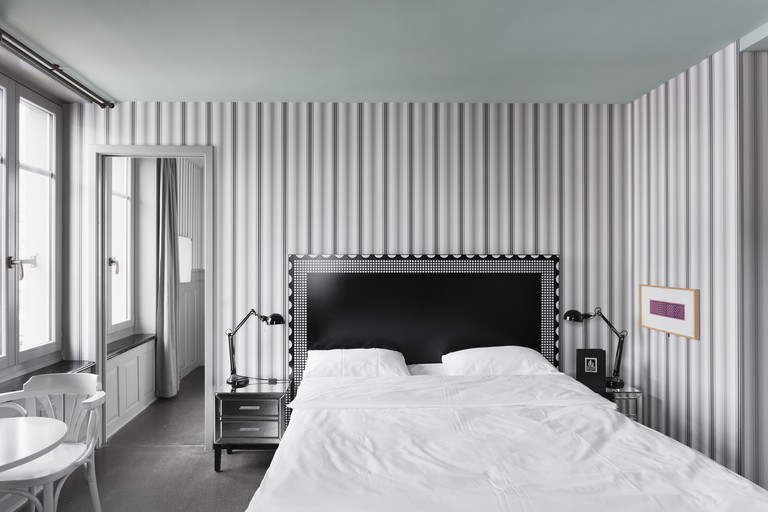 With dishes such as aniseed-pickled Swiss salmon with dill, home-made oxtail ravioli, and caramelised vanilla cream with rhubarb and frosted tirggel biscuits (a seasonal Zürich speciality made with honey), head chef Karim Schumann’s menu at the Helvetia is confidently traditional yet innovative. On the banks of the River Sihl, it has 35 boutique rooms with an art nouveau flavour in two old buildings, making it easy to stagger upstairs after supper.

This is an updated rewrite of an article originally by Laura Hampson.

If you’d prefer to keep things simple, check out where to stay on a budget in Zurich, bookable with Culture Trip.