The Best Vineyards In Geneva, Switzerland 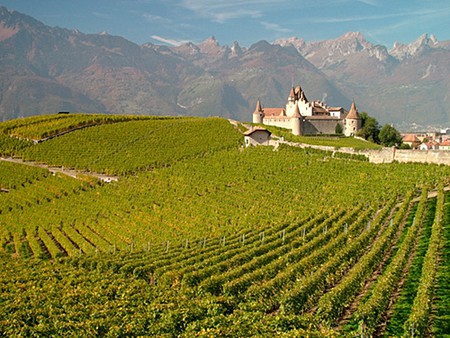 Switzerland’s vineyards, unlike those of neighboring France, are small, family affairs that produce some of Europe’s best wine. Grown on the slopes surrounding Lake Geneva, Swiss grapes make for light, easy-drinking wines that are rarely exported but probably should be. Take a tour of the best vineyards around Lake Geneva and find out about this under-appreciated wine region. 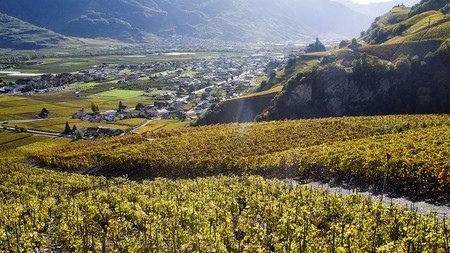 In the fertile hills that surround Geneva, a rambler will discover a rural scene entirely removed from the modern, almost sterile city that lies just miles away. The rolling landscape is completely blanketed by lush vineyards, broken only by rustic villages of quaint stone cottages which house the farmers and vintner families that have produced their unique wine for generations. The Geneva slopes, Switzerland’s third largest wine-producing area, cover three distinct regions: rive droit – the right bank of the Lake, including Satigny village, which boasts the most dense concentration of winegrowers in the country, entre Arve et Lac – the left bank of the Lake, stretching between it and the Arve river, and entre Arve et Rhone – the strip of land sandwiched between the Arve and Rhone rivers. 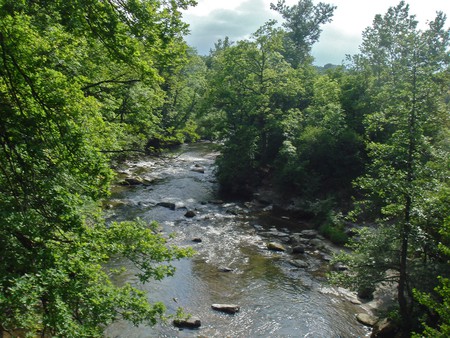 In the aforementioned village of Satigny, La Cave de Genève has been setting the benchmark for top quality Swiss wine since its founding 20 years back. Year after year, the wines produced here by the dedicated team, led by winemakers Florian Barthassat and Patrick Gräzer, win prestigious awards at international wine competitions. This year, La Cave de Genève’s Aiglette, Sauvignon Blanc 2012 triumphed at the Concours World Sauvignon 2014 in Bordeaux, where it was bestowed Switzerland’s only gold award, judged amongst 750 wines from 22 different countries by 60 industry specialists. Earlier in the year its Viognier de Genève 2012 – “La clé du temps” – delighted the panel at the 20th Vinalies Internationales wine competition in Paris, ultimately winning a silver medal. 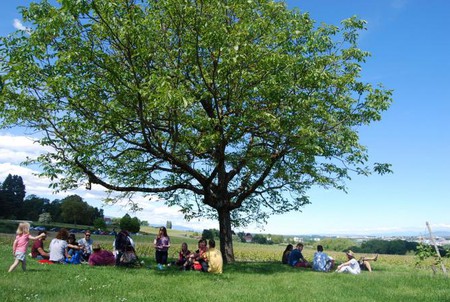 Another deservedly revered family winery in Satigny, Domaine du Paradis has been approaching La Cave de Genève’s level of international recognition in recent years. Whilst their gorgeous jardin des senteurs – scented garden – where visitors can enjoy the gelato and classical music accompaniment at the caves ouvertes and various seasonal events, the main attraction is, of course, the produce of their vines. Amongst the many varieties of grape and wine produced here, the Sauvignon blanc has won both gold and silver awards at prominent international competitions in Paris and Bordeaux, and can be sampled in the rustic underground vault, whose warm atmosphere and design is described by the owners as channeling ‘an Indian summer’. The stylish cellar welcomes wine enthusiasts for a tasting session lead by the owners’ daughter, who immerses guests in the vintner’s world.

Our final winery in the village of Jussy on the left bank of the lake, is no less a vineyard estate than it is an ancient heritage site: a castle built in 1222. Château du Crest has seen many a feudal conflict over its long and noble history, and fell to ruin as a result of such struggles in the late 16th century. Its role in the region was far from over however, as its cultural significance was reaffirmed by baroque poet Theodore Agrippa d’Aubigné, who resurrected the estate to its grandeur in 1624. Upon his untimely death, the castle transferred hands to Jacques Micheli, from whereon it imprinted itself on the winery scene and survived in this capacity and in the same family to this day. The surrounding farmland, of which the vineyard is a significant part, is one of the largest privately owned farm in the country, and grows more than 18 different varieties of grapes including Chasselas, Gamay, Riesling-Sylvaner, Pinot Black, Gamaret and less common varieties like Malbec and Muscat. The vintners in the Château du Crest fields practice an unusually meticulous handwork to care for their strategically planted low vines with high density yield.

Domaine de Trois Etoiles is known amongst the other wineries for its bustling and vibrant atmosphere, artistic flourishes, and its contribution to the production of L’Espirit de Genève – a red blend wine composed of Gamay, Gamaret and Garanoir grapes and other selected constituent grapes of the winemakers’ personal choosing. This unique wine, the flagship, so to speak, of Geneva’s vineyards, is raised in oak barrels, following a strictly regimented process, before being blind-tasted by all 15 local vintners who partake in its production. Once its round and harmonious flavour has been approved, it is then marketed as the innovative Geneva specialty, particularly popular in the Swiss-German areas. Of all the contributors, Domaine de Trois Etoiles is perhaps the most distinctive and sophisticated winery and cellar, decked with iridescent stained glass windows, and contemporary art along the walls of the bright and airy farmhouse. This vineyard is also one of the most hospitable, making the most of the open courtyard, flanked by quaint buildings covered in murals on one side, and a gently sloping meadow overlooking the valley on the other.

Based in Russin, less than an hour’s gentle stroll from the hub at Satigny, Domain des Molards stands proudly as an enduring symbol of the rural enterprising nature that has existed in Geneva’s hills for almost 1000 years. This vineyard has belonged to the Desbaillet family since 1352, when Switzerland was a young and newly flourishing country, and the ancestral patriarch Jacquet Desbaillet made the pioneering decision to plant a vineyard on the land he had been allocated as his estate. The vineyard is now cultivated and promoted by his direct inheritors, 21 generations down the line – Michel and Claire-Lise Desbaillet. In spite, or perhaps because, of its long history, Domain des Molards is always looking to the future of the wine production industry, and has certainly evolved with the times, now providing their various services from the historic house, with a touch of both simplicity and elegance, including wine tastings and a particularly festive show for the caves ouvertes weekend.

Though many more of the wineries in Satigny and the surrounding hamlets deserve an honorable mention, the final featured cave from rive droit area represents the vast number of traditional and humble wineries of the region. Whist just as popular as its sleek and modern rivals, Clos de Gondettes, founded in 1867, projects a somewhat different sense of values, rooted in origins of a historic wine legacy that dates right back to the Roman era. The cellar is just that, a musky underground vault, with giant oak barrels forming a network of pathways between stooped grottos. The wine produced here is outstanding and all varieties are crisp and dry. Particularly recommended is the mellow Gamaret Dardagny red, with smoky overtones and a light texture.

Between the Rhone and the Arve rivers, villages such as Lully, where Domaine des Curiades is nestled, make best use of the fertile mixed soil type, and months of blue-skied sunshine. This area is much less visited than the right bank of the lake, making for a perfect setting for quite exploration and countryside rambles, coming upon the more sporadic vineyards and hamlets along the way. The Domaine des Curiades vineyard prides itself on its ‘revolutionary’ wines, having produced such specialties since the area was developed by nobleman Jules Dupraz. True to the name they bestowed on the fields, Jules and Louis Pierre Dupraz followed their curious instinct to create new varieties and blends that were yet untried. Alongside wines that are now common to the region, such as Chasselas, Aligoté whites and Gamay and L’Espirit de Genève reds, they also produce Curiades specials of both colours, and the enticingly entitled l’absolu, l’authentique and l’essentiel from les naturels series.