Political Art Was Huge at the 2017 Art Basel But Did it Sell? 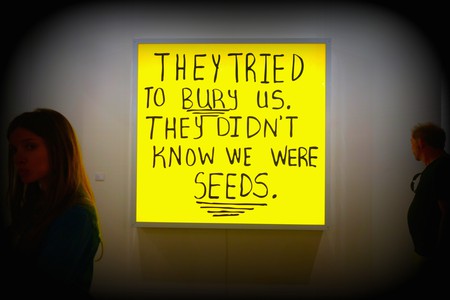 Art can be a powerful political tool that can speak for the voiceless, and express what words can’t or won’t say. But when political high jinks are stranger than fiction and dominate the news, social media, and entertainment, does activist art suffer from overexposure? 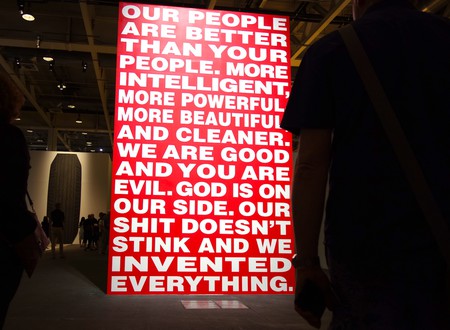 As the 48th edition of the juggernaut that is Art Basel wrapped up, it had welcomed 95,000 visitors, 291 galleries from 35 countries and showed, according to Bloomberg, $3.4 billion worth of artworks competing for attention. Sales were strong on the first two days, in what gallerists described as a “very good” year. Among the most prominent this year were pieces engaged with, or shining a light on, a political issue. Art Basel director Marc Spiegler said in a press conference that when curating this edition of Art Basel, politics were a main focus,”we chose not only art reacting to current politics, but also older art that is of historical importance.” 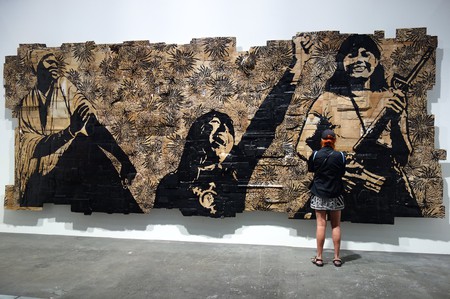 One piece that caught the eye among the visual overload was Sam Durant’s light box They Tried to Bury Us. They Didn’t Know We Were Seeds (featured top image) presented by Blum & Poe Gallery. Director Michael Smoller, very satisfied with results of the fair, explained that the origin of the text can be attributed to the Greek poet Dinos Christianopoulos, a celebrated voice from the 1950s gay community. The phrase has since been picked up by counterculture movements such as the Zapatistas, protesters of civil unrest throughout Mexico and Central America.

For Galerie Max Hetzler, it was a really good year but not for political art. “Documenta (the quinquennial exhibition held in Kassel, Germany) was too political this time,” said Senior Director Samia Saouma, “Art Basel was very good for us, but we didn’t sell any political art per se, but I know artists like Ai Weiwei are always in demand.”

Some pieces flew off the shelves, like a Marinella Senatore that went for over $15,000 on a preview day that raked in upwards of $60 million. “Besides being political, Marinella’s art is beautiful to look at, it sold on preview day,” said Gallerist Pedro Cera. “Collectors were looking at political pieces that also have an aesthetic appeal. Other pieces that are just as powerful but harder to look at did not sell so fast.” 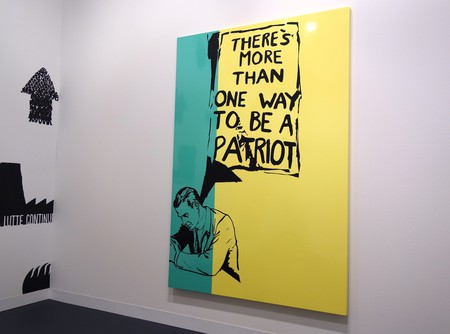 Art Basel 2017, Gallery Pedro Cera, Marinella Senatori There Is More Than One Way To Be A Patriot | ©Sylvia Edwards Davis

Another powerful statement that sold to a collector during the show was Gladiolus, a carving on drywall by Kemang Wa Lehulere presented by Stevenson. The sign language reads “Eleven August” in reference to the student uprising of August 11, 1976 in Capetown, credited as one of the pivotal events that triggered the end of apartheid. The piece is visually striking in scale and by the use of stark black and white, adding a second layer of significance for those viewers “in the know” about the message. 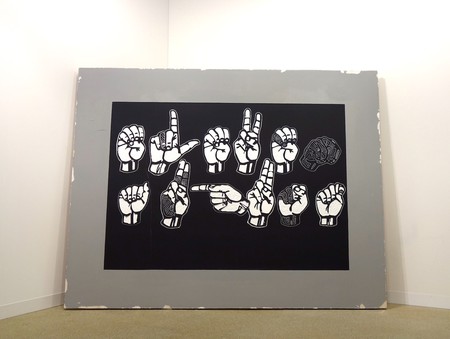 The curator’s decision to bring political art to the foreground not only showed that political art still sells, but also that it has longevity in the eyes of collectors, and is not limited to the actual time when the subject of the piece was making the headlines.