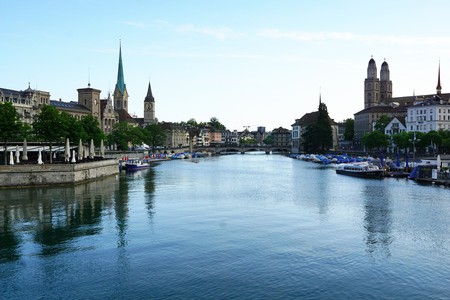 Experience the best of Zurich’s architecture on a walking tour of the historic centre, where you’ll find some of the city’s finest architecture. For an alternative tour you can head to Zurich West, a former industrial site that has had a breath of new life in the form of urban renovations.

A tour of Zurich’s city centre revolves around four main sights: Grossmünster Church, Fraumünster Church, St. Peter Church and the Bahnhofstrasse. All are within easy reach of one another.

Start your tour in Grossmünsterplatz where you can admire the historic Romanesque church’s double towers. Its sombre interior reflects its role as the birthplace of the Protestant Reformation in Zurich, from where the tide of religious reform swept across the country and shaped Switzerland into the country it is today.

After visiting the Grossmünster, head across the Münsterbrücke bridge. From this point you’ll already see the towering spire of Fraumünster which is a curious shade of green. Fraumünster is famous for the 5 beautiful stained-glass windows that adorn its interior, each one telling a different Christian story. 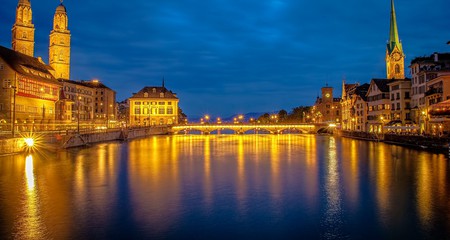 Continue north to the wide open square of St. Peterhofstatt. Here the St. Peter Church towers over you – it’s the oldest parish church in Zurich and differs quite distinctly from all others as it is also the city’s only baroque church. But what is most interesting is the large golden clockface on its tower, which is the largest church clockface in Europe with a diameter of 8.7 metres on all sides.

From St. Peterhofstatt you can branch off into any of the side streets which will take you deeper into the historical centre. Or head south again to Paradeplatz where you’ll stand surrounded by the most expensive real estate (unsurprisingly it’s the centre of Zurich’s banking business). The Paradeplatz is part of the Bahnhofstrasse, a glitzy shopping street that’s packed with high-end brand outlets, many of which have maintained the historic facades of the buildings they reside in.

A tour of Zurich West’s architecture is best begun at the Im Viadukt. This railway viaduct has found itself remodeled into one of the quirkiest shopping streets in Zurich. Each archway, there are around 30 in total, has been turned into a store or restaurant. A short distance away from the Viadukt, towards the train tracks you’ll see the glimmering face of the Prime Tower, Zurich’s tallest skyscraper and previously the tallest building in Switzerland. Between the Viadukt and Prime Tower is Frau Gerold’s Garten, a good stop for lunch at one of the shipping containers that have been remodeled into bars and restaurants with garden areas. 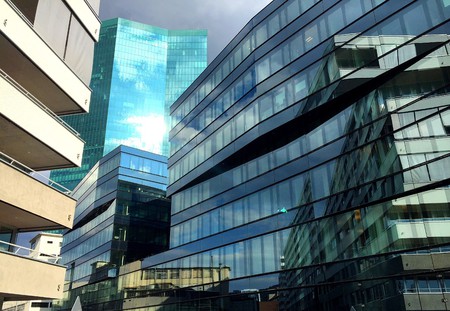 Prime tower glimmers in the background | © Sarah_Loetscher/ Pixabay
Give us feedback