A Brief History of the Jet d’Eau, Geneva 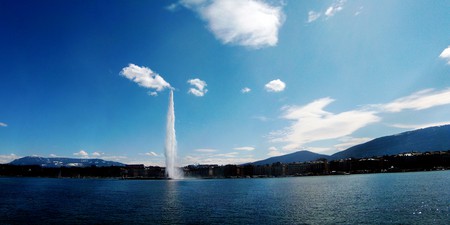 It’s one of the main sights of Geneva, mainly because it is so difficult not to miss. It is of course the Jet d’Eau, a 140-foot water fountain that fires 500 litres of water into the air every second, meaning that at any given time there are around 7,000 litres of water flying over Lake Geneva. All very impressive, isn’t it? But why is the Jet d’Eau there in the first place? Is it a symbol of Geneva’s great standing in the world and its wealth that it can afford to waste so much water, or are its origins a little more mundane?

It is in fact the latter. The first fountain sprung to life in 1886, a little downstream from where it currently stands and was a safety valve for a nearby hydroelectric plant that fed a jeweller’s factory. This first edition of the Jet d’Eau spurted a measly thirty metres into the air. 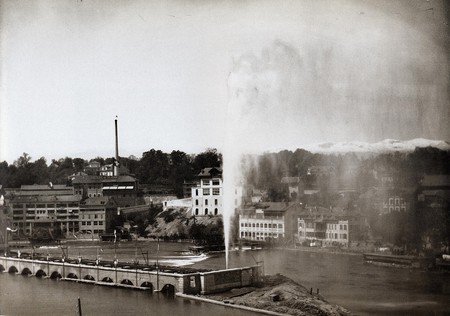 In 1891, when Switzerland was due to mark its 600th birthday, it was decided to move the Jet d’Eau from the Usine de la Coulouvrenière to where it stands today. A reach of 30 metres wouldn’t cut it either, so the water flow was increased and the new one maxed out at a much more impressive 90 metres.

The third and final renewal of the Jet d’Eau was completed in 1951. A partially submerged pumping station was built along the Jetée des Eaux-Vives and water from the lake was used, rather than the city’s own water supply, giving us the 140-footer that cascades across Lake Geneva today.

Ever since those early days when the Jet d’Eau was thought of as a potential landmark for Geneva, it has retained a lofty status for some and existed solely as a bit of a joke for others (it also goes by the name “le grand pipi de Genève”, which needs no translation).

Whatever side you fall on, it is hard not to admire the Jet d’Eau. Just don’t stand too close, as a quick change in wind direction can leave you with a face full of lake water.