A Brief History of The Grossmünster Church, Zurich 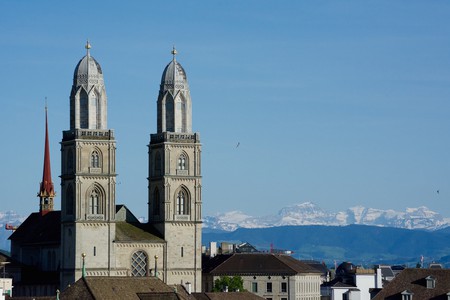 The Grossmünster is one of the most important churches in the city of Zurich. Its colourful and eventful history includes headless saints and an infamous argument over sausages.

According to legend, the brothers Felix and Regula were part of the Theban Legion stationed in Valais, a canton of Switzerland. In 286 AD, the legion was marked for execution after they converted to Christianity. Understandably, to avoid a sticky end, the brothers fled to Zurich where they thought they were safe, but unfortunately for them they were both caught, tried and executed by beheading.

But that wasn’t the end for them, as the story goes. They stood up, picked up their bleeding heads and walked uphill (40 paces to be exact) to pray on the hilltop before finally settling down to death. They were buried where they fell. 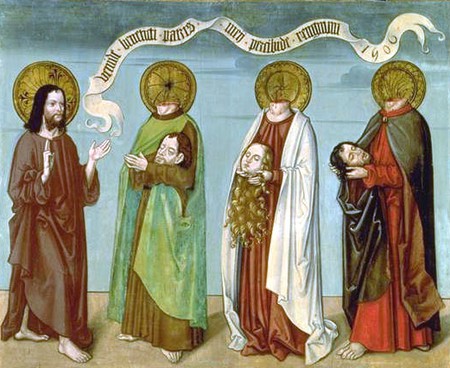 The headless saints Felix, Regula and Exuperantius are guided to heaven by Jesus. | Public Domain/ WikiCommons

Many years later, Charlemagne was out hunting when his horse took a tumble over the exact same spot where Felix and Regula had staged their headless miracle. So enthralled by this miraculous event, Charlemagne decided to found a church on the site and thus laid the foundations of Grossmünster.

An affair of sausages

In 1100 AD, the modern construction of church began and was finally finished in 1220. Not much of significance happened after Charlemagne’s horse theatrics until the 16th century, when things really kicked off at Grossmünster.

In the year 1519, Huldryc Zwingli took up the post of pastor at the church. He already had a track record of agitating about reforming the church, but things didn’t come to a head until three years later, when Zwingli and some friends broke the tradition of fasting during Lent by dividing two smoked sausages between them. Zwingli defended his position and opposed those who claimed their actions had been heretical.

The ensuing argument, known as the Affair of the Sausages, is now considered to be the trigger for the Reformation in Switzerland. 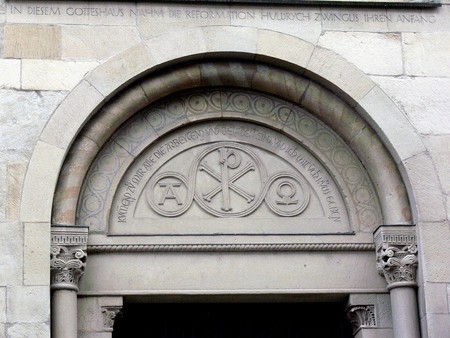 An inscription at Grossmünster reads "In this house of God Huldrych Zwingli's Reformation took its start." | © Christian Bickel / WikiCommons

Zwingli used his position to push for reforms to the church. He followed the view of Luther, that anything the Bible did not explicitly mention should not be a part of religion.

The church we see today began to reflect the new way of seeing religion and it took on a sombre and serious tone. The church organ was taken out and religious statues were removed, while music was banned within its walls. The tradition of Lent was abandoned and the practice of celibacy for church officials was struck down (which the already married Zwingli had long been pushing for), among other notable reforms that extended beyond the church.

Around the year 1530, Zurich’s population followed new religious rules such as compulsory attendance at Sunday church services and the closing of inns and taverns by 9pm.

After Zwingli’s death, Grossmünster and Zurich remained an important part of the Swiss Reformation. Stepping inside the church today it is clear to see the impact that the Reformation had, as its interior is cold and stripped back, a far cry from the opulence of many others which avoided the winds of change.