8 Customs Only The Swiss Can Understand 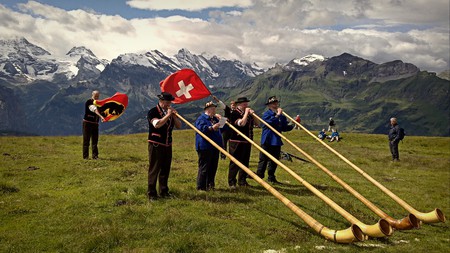 Switzerland is an unusual place. Its traditions change dramatically from canton to canton. In the French speaking part, you have age-old rivalries with the French that are relived every year, and the in the Swiss-German part a particular fondness of cows and cow-bells. Dive into some of the strangest and most endearing, customs that the Alpine country has to offer.

A political enthusiast’s dream and a dictator’s nightmare; the Landsgemeinde is probably the most absolute expression of people power there is. Citizens turn out in public squares to cast their vote on any pressing issues of the day. A vote is a simple raised hand. The word Landsgemeinde goes back until at least the 16th Century, but the practice is likely to be much older.

It’s still practiced in the Appenzell and Glarus cantons, but back in the day it used to be the deciding authority in six other cantons across Switzerland. Go along to one and see one of the purest forms of democracy today in action.

Test your ears at the four-day Summer “Yodel Fest” in Haut-Valais. Yodel groups come from all over Switzerland dressed in their traditional outfits to celebrate the Alpine tradition and out-yodel the competition. Yodelling began as a way for farmers in the Alps to communicate with one another, the undulating yodels carrying through the mountains and valleys much better than a simple shout. The event even attracts competitors from overseas. Just be sure to bring some earplugs in case it all gets a bit too much.

Creepy masks, check. Giant, chest-sized cowbells, check. Yodelling, check. This isn’t Halloween, this is Silvesterchläuse; New Year’s celebrations in the canton of Appenzell. Cow bell wielding fairgoers wander from house to house and restaurant to restaurant, ringing their bells at the inhabitants and yodelling at them before wishing them a happy new year and moving on.

At the Gotthelf Märit, or the historic farmers market in Sumiswald, everyone partys like its 1779. Vendors wear the same traditional dress that was worn around the time of Jeremias Gotthelf, a renowned Swiss novelist. There are traditional dances, arts and crafts for sale, numerous trinket shops and a whole lot of food on offer, all topped off with a nice 18th century feel.

There’s something incredibly charming about watching a group of adults skiing down a mountain side dressed as witches. Held every January in Belalp in the canton of Valais, it takes the crown as one of the strangest downhill races, as participants ski from Hohstock down the mountain sides to the little village of Blatten, riding broomsticks. Legend has it that Belalp was home to a particularly troublesome witch and the races are a way to honour her wicked memory. All the fun is capped off with a festival full of music, drinking, flaming torches and DJs.

Imagine two massive men trying to out hug each other and that’s pretty much what’s on show at the Wrestling Festival on Mount Rigi. The festival dates back to the 16th century, making it one of the oldest in the country. But it’s not all bear hugs and brawn, there’s also traditional folk music, flag dancing and much more.

Part race, part reason to eat chocolate; L’Escalade is a Genevois tradition. The tale goes that back in 1602 on the night of December 11, the Duke of Savoy’s army tried to scale the walls of Geneva. But Catherine Cheynel, the so-called Mère Royaume, or “Mother of the Kingdom”, was cooking a large cauldron of soup, as you do in the wee hours of the morning. Catherine spotted the French scaling the walls and put her soup to good use, pouring it on the invaders heads and waking the Genevois army.

Thus, the French were repelled and every year the Genevois mark the day by hosting a testing race, the Course de L’Escalade through Geneva’s old town, re-enacting the infamous battle and by cracking open a chocolate cauldron stuffed with candy, while chanting a ditty mocking the French. 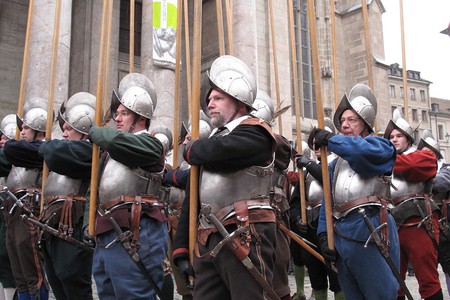 Crown the Queen of Cows in Valais

Back to the Canton of Valais we go and yes, you guessed it, it’s another cow based event. This time however, the cows are facing off in a battle to crown the “Queen of Queens,” which is the cow who leads the heard during the summer.

It’s all a very Swiss affair. The cows are brought along to the ring, untrained or unbaited, according to their weight category and left to their own devices. Being particularly territorial they fight among themselves, pushing with their horns until their opponent has had enough. Somewhat unsurprisingly the winner receives a giant cowbell, of course! 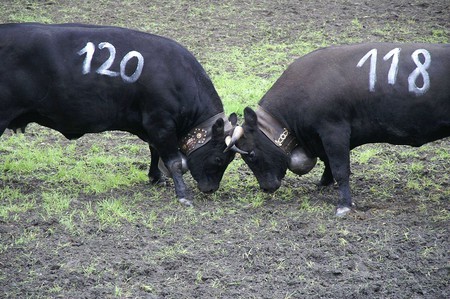 Cow battles in Valais | © Christof Berger / WikiCommons
Give us feedback