7 Swiss Myths and Legends You Should Know 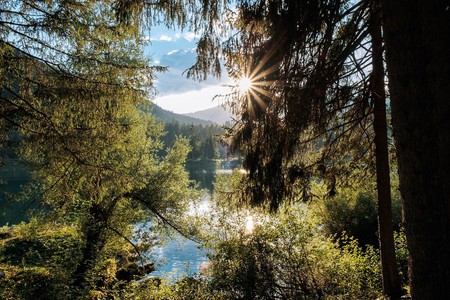 Maybe it’s the cold weather, the national love of wine, or the rampant consumption of cheese, but whatever the case, Switzerland is a country with a lot of myths and legends. From the unfortunate tale of Anna Göldi, the last ‘witch’ executed in Europe, to the child-eating ogre of Bern, strap yourself in for a journey through Swiss culture’s fables and folklore.

If you ever have the misfortune of being up close and personal with an avalanche, you may see a white creature with massive feet surfing the crest of the snowy wave. At least, that’s what the Swiss will tell you. Said creature is a Barbegazi, not unlike a dwarf or gnome, who lives in the mountains and skis around using his big, flat feet. They aren’t said to be dangerous and, in fact, are rather helpful to lost humans.

You can probably count the number of dragon-slaying Irish monks that you know on one hand. Well, add good ol’ St Beatus onto that list. Back in the 1st century, St Beatus went off in search of some peace and quiet but instead found a cave under occupation by a fire-breathing serpent. No problem. St Beatus simply booted the dragon out and set up his new digs. Today, you can visit the caves and wander deep into the Beatenberg mountain. 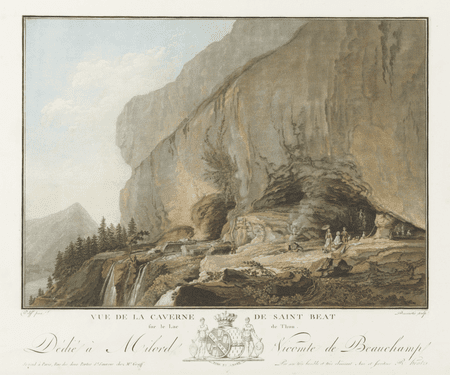 The Child Eater of Bern

The Kindlifresser is a garish statue that depicts an ogre, or very ugly man, gorging himself on a sack of babies. Nobody knows exactly why the statue is there. But one of the theories goes that a brother of Duke Berchtold, who founded Bern, went more than a bit loopy during his time. Berchtold senior apparently went off on a child-eating rampage through the city. Fortunately, there’s very little evidence that this ever happened.

For some reason, the people in Uri decided to hire the Devil to help them build a tricky bridge in the Schöllenen Gorge. Apparently, they were unaware of the horned craftsman’s fiendish ways. The Devil demanded the soul of the first thing to pass across the bridge. Thinking they were clever, the village people sent across a goat (one version says a dog), and the Devil tore it asunder. Taking a fit of rage, the Devil charged off to pick up a huge boulder to destroy the bridge, but when he returned, an old woman with a cross stood in the middle of the bridge. The Devil charged off, dropping the boulder into the gorge, where it is still visible today. Everyone lived happily ever after, apart from the goat, which sadly didn’t recover from the devil-induced obliteration. 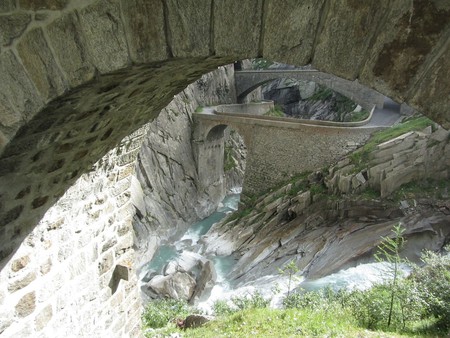 Arnold von Winkelried was a tough dude – if he ever existed. During the battle of Sempach in 1386, the old Swiss Confederacy faced off against the Austrian army of Duke Leopold III. The legend has it that the Swiss couldn’t break through the Austrians’ line of pikemen and faced imminent defeat until one Arnold von Winkelried (probably a 14th-century precursor to Arnold Schwarzenegger) took it upon himself to charge the enemy lines with a bunch of pikes, breaking up the Austrians and leading the Swiss to victory. Unfortunately, he died during the attack (something to do with landing on dozens of sharpened metal pieces), but people remember the event as one of the pivotal moments in Swiss history. However, historians aren’t entirely sure that Arnold was even a real guy, let alone a pike wall-busting behemoth. 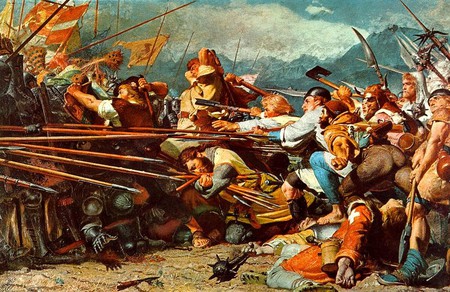 Arrested in the canton of Uri in 1307 for a public slight, William Tell was told he could go free if he shot an apple from his son’s head. An expert marksman, Tell cleaved the apple in two and kept a spare bolt to murder Gessler, the man who sentenced him. Tell’s two-finger response to the Austrians who occupied Uri turned him into a legend of the early Swiss Confederacy.

Anna Göldi was a servant in a rich household. When one of the children mysteriously became ill after finding needles in her food, Göldi was blamed. After a long and drawn-out process, which even at the time was considered farcical, Göldi was sentenced to death for sorcery against the child. Only in 2008 was Göldi exonerated. Read the full story of Anna Göldi here.