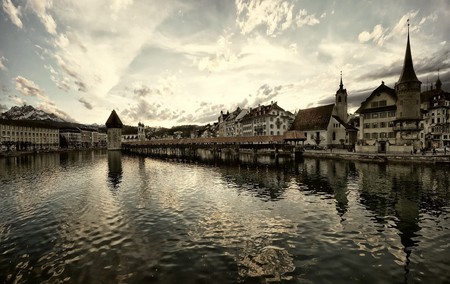 Lucerne is known as the pocket-sized version of Switzerland. History, culture and of course, spectacular scenery come together in a perfect blend that’ll have you longing to extend your stay. Here’s why you need to get to Lucerne ASAP.

Switzerland’s fourth largest lake is one not to be missed. Its setting is simply stunning, with the tops of the nearby mountains glistening all year round and the lake’s fjord-like offshoots giving a more Scandinavian feel than Swiss. You can take it all in from one of the historic paddle-boats that ply the lake, or tour the water’s edge on foot.

Lucerne’s Culture and Convention Centre (the KKL Luzern) is a top-class concert hall, art museum and architectural curiosity all in one. You can take in a show in one of the country’s finest concert halls and also admire one of the best art collections in Central Switzerland in the same visit.

Lucerne has a curious history as it’s still debated when the city was actually founded. Some sources say the first semblance of a settlement dates back to 840 AD, while others say the city was born much later around 1178. The best way to delve into the city’s history is with a guided tour of the local history museum, housed in the old city armoury.

The Museggmauer and its nine towers are an icon of Lucerne, dating back to the 14th century. They make up the remnants of the old wall that surrounded the city, defending it against would be attackers. Four of the towers are open to the public and you can gaze out of the ramparts at the city below.

The Chapel Bridge is Lucerne’s most iconic site. It’s an old wooden footbridge, the oldest of its kind in Europe, with a number of decorative paintings all along its interior. Take a stroll along and admire the artwork within, sit on the walls of the river and watch as the bridge lights up at night, when the Kapellbrücke is at its most spectacular.

For the best panoramic views of Lucerne and the surrounding landscape, you’ll have to scale nearby Mount Pilatus (or you can just take a gondola and cable car). The mountain is steeped in history, some of it rather fantastical, as it is said a dragon once dwelled there in the Middle Ages. But most people come for the breathtaking views which allow you to count 72 other mountain peaks on the clearest days.

Depicting one of the great tragedies of the region, the famous Lion of Lucerne in its death throes is a must visit. During the French Revolution, hundreds of Swiss mercenaries fighting for Louis XVI were massacred. Many years later, the Lion monument was carved to commemorate those who died. It is a powerful and moving monument and has become one of the city’s top tourist attractions.

The Gotthard Panorama Express is a journey that starts off from Lucerne and takes you by boat and train to Bellinzona, in the canton of Ticino, Switzerland’s Mediterranean heart. The first stage is a leisurely paddle steamer to Flüelen on Lake Lucerne, with splendid views of Mount Pilatus and Rigi. The rest of the journey is by train as you wind through valleys and gain altitude to a maximum of 1141 metres, passing through the Alps by the Gotthard tunnel until you finally arrive in temperate Bellinzona.

Museum
Facebook
Email
Twitter
Pinterest
Copy link
Share
Map View
The Swiss Museum of Transport is one of the best museums in the country. It traces the story of all kinds of transport over land, sea, in the air and in space. It’s a highly interactive experience that’s also great for kids. One of the highlights is the massive Planetarium where you can sit back and watch the stars whizz by.
Open In Google Maps
Lidostrasse 5, Luzern, 6006 , Switzerland
+41413704444
Give us feedback

At Lucerne’s annual festival you’re treated to several days of riotous fun. Music players, “Guggenmusigen”, blast out tunes as marchers with wild and wacky masks parade through the streets. The dominant figures of this festival are old man Fritschi, his wife and child. This odd trio set the tone by riding through the streets on a float on so-called Dirty Thursday, driving away winter and kicking off the festivities that take over almost the entire city for the next few days.

Museum
Facebook
Email
Twitter
Pinterest
Copy link
Share
Map View
A highlight of any trip to Lucerne is the Glacier Garden. In 1872, glacial potholes were discovered when a local businessman was digging out a new wine cellar. They were traced all the way back to the Ice Age. Inside the nearby museum, you’ll learn what caused these fascinating formations.
Open In Google Maps
4 Denkmalstrasse, Lucerne, Switzerland
+410414104340
Give us feedback

One of the best things about Lucerne is that it’s at the heart of Switzerland, meaning you can explore the surrounding area on some great day-trips. You can head to the icy heights of the Jungfraujoch, Europe’s highest railway station and home to the Great Aletsch Glacier, as well as a number of famous peaks. Other cities are a short train ride away as well. You can take a trip to the capital of Bern, or check out Interlaken which is known as the adrenaline capital of Switzerland.