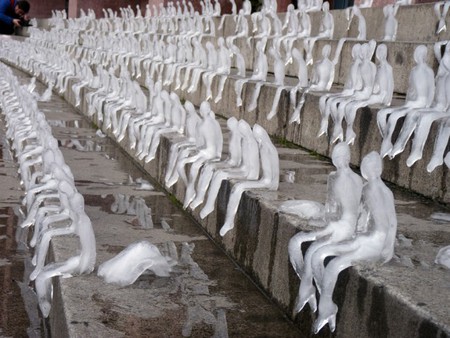 Some art isn’t created to be exhibited in art museums, and often works of a more fleeting nature can be all the more haunting, beautiful and meaningful. We take a tour of the some of the most awe-inspiring temporary artworks crafted in recent years – from Swiss artist Dieter Roth’s decaying art, to Seattle-based sculptor John Grade’s magnificent Middle Ground.

Created in 1990 shortly after his graduation from London’s Goldsmiths College, Damien Hirst’s A Thousand Years – a two-part vitrine housing a severed, rotting cow’s head fed on by flies after which they are zapped to death in an Insect-o-Cutor – is considered by the artist as one of his most important works. A somewhat macabre portrayal of the cycle of life and death, the work took the art world by storm, prompting fellow British artist Lucien Freud to tell Hirst; “I think you started with the final act, my dear”. More than two decades later it still has the power to captivate – during a showing of the work as part of Hirst’s 2012 Tate Modern retrospective, gallery director Nicholas Serota stated it was one of the artist’s most exciting installations.

Much of Dieter Roth’s whole œuvre was concerned with both the impermanence of art and life and the Swiss artist often turned to perishable food to convey his message. His 1968 bust P.O.TH.A.A.VFB (Portrait of the artist as Vogelfutterbüste) was a self-portrait of Roth as an old man. Cast from a mixture of chocolate and birdseed, the piece was a reference to James Joyce’s 1916 novel A Portrait of the Artist as a Young Man – which Roth deemed ‘sentimental’, ‘cloying’ and ‘kitsch’ – was intended to be displayed in a garden and gradually consumed by birds.

The creation of Seattle-based artist John Grade’s magnificent Middle Fork – a 45-foot-long sculpture based on a cast of a 150-year-old hemlock tree in Washington’s Cascade Foothills, featuring thousands of tiny, hand-carved blocks of salvaged cedar – was a painstaking, year-long process involving hundreds of dedicated volunteers. Recently shown at the Smithsonian American Art Museum’s Renwick Gallery in Washington DC, Middle Fork will complete an exhibition tour of the USA before it is returned to the base of the original tree from which it was originally cast and left to gradually decay, which Grade will capture via time-lapse photography. 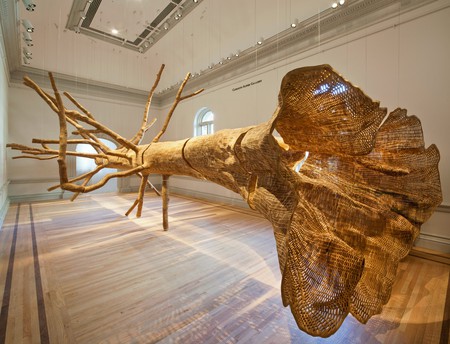 First exhibited at Swinging London’s iconic Indica Gallery in 1966, Yoko Ono’s Apple – a lone Granny Smith apple placed on a Plexiglas plinth – is representative of the Japanese artist’s early conceptual work. It was one of several artworks – alongside pieces like Painting to be Stepped On (1960-1961) and her ground-breaking performance work Bag Piece (1964) – included in her first retrospective, Yoko Ono: One Woman Show, 1960 – 1971, at New York City’s MoMA in 2015, though with a fresher substitute apple, of course. Ono has said of the work; “There is the excitement of the apple decomposing, and then the decision whether or not to replace it, of just thinking of the beauty of the apple after it’s gone.”

Zurich-born, New York City-based artist Urs Fischer wowed audiences at the 2011 Venice Biennale with his Untitled contribution, inspired by that year’s theme ‘ILLUMInations’. The installation – a trio of wax candle sculptures – an office chair, a life-size replica of Flemish-Italian sculptor Giambologna’s 16th century work The Rape of the Sabine Women, and the other a bemused, bespectacled onlooker. Fischer humorously described the dimensions as ‘variable’, as they were intended to gradually liquefy over the course of the five-month-long exhibition, finally resulting in a misshapen puddle of melted wax. 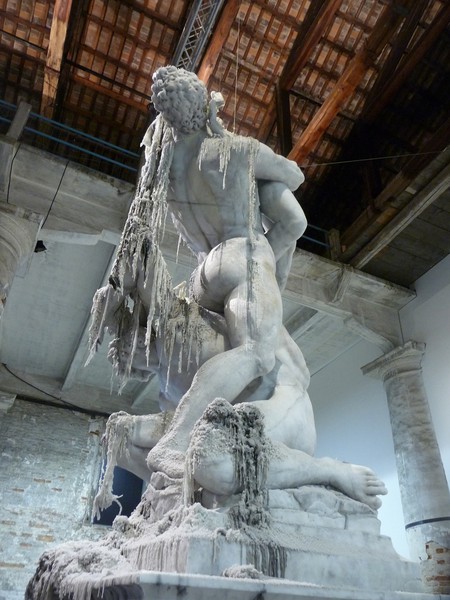 Globe-trotting Spanish street artist Francisco de Pájaro, also known by his alias Art Is Trash, has traveled to cities worldwide including London, Berlin and New York City rearranging and re-appropriating garbage and other discarded objects he finds on the streets into playful, yet political temporary trash sculptures that comment on hyper-consumerism and obsession with power. Though his works are intended to be discarded–and they often are, sometimes immediately by rubbish collectors or unwitting passers-by– de Pájaro’s dedicated global following actively document and share his trash sculptures on social media under the hashtag #artistrash. 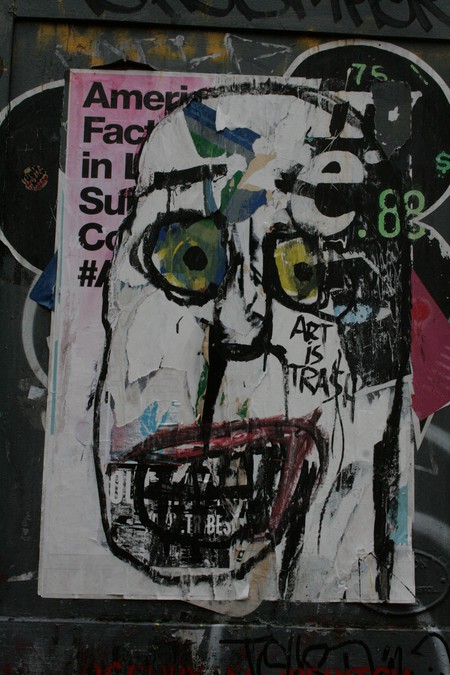 Since the mid-2000s Brazilian sculptor Néle Azevedo has traveled to cities across the globe (Paris, Santiago and Berlin to name but a few) with her work Minimum Monument – a series of hundreds, sometimes thousands, of tiny human-shaped ice sculptures placed at culturally and historically significant landmarks by passers-by and left to melt. Azevedo, whose work explores the potential for reconciliation between the subjective self and the city via urban interventionism, intended the work to be a sort of ‘anti-monument’ – or what she has termed ‘a liquid monument for liquid times’ – but has also come to be seen as a symbolic warning about the threat of global warming.

German Fluxus artist Joseph Beuys, just as his Swiss contemporary Dieter Roth did, often employed edible or perishable materials in his work. While matter including sausage, cheese, butter and chocolate were all used over the course of his career, fat was quite possibly his favorite medium. His installation Fettstuhl (Fat Chair) (1964-1985) featured a slab of lard placed on a simple, white chair left to slowly fester over the course of decades, evolving the artwork as it gradually decayed. 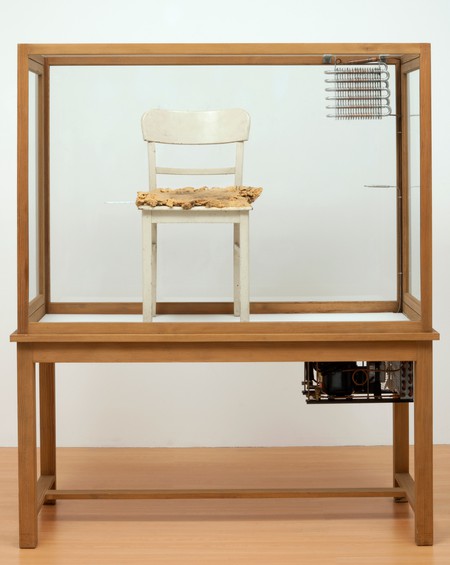 Nestled in the woods of Italy’s Sella Valley is ArteNatura, an art route established in 1986 by the Arte Sella Association; featuring over 20 works of contemporary sculptural art crafted from organic materials like branches, stones and leaves — intended to exist, evolve and eventually expire in their beautiful, natural surroundings. Along the route, viewers will spot artworks including Dutch land artist Will Beckers’ magnificent Echo – a ‘living installation’ the Belgium-based talent created in 2014 – and British sculptor Sally Matthews’ Wolves. 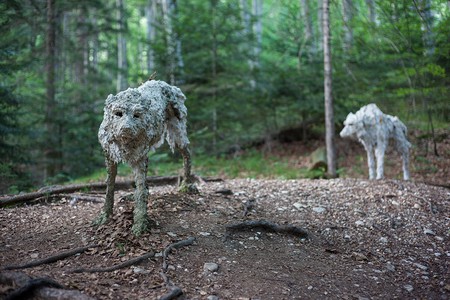 In a similar vein to his more famous, or perhaps infamous, 1961 work Artist’s Shit conceptual Italian artist Piero Manzoni’s Artist’s Breath was, like much of his œuvre, not only an exploration of the commodification of his own bodily substances as theme, but a comment on the commercialization of culture in the Post-War years and a parody of the art market. Originally consisting of a red balloon inflated with Manzoni’s breath and secured in place with lead weights, all that is left of Artist’s Breath today is the misshapen remnants of the balloon precariously stuck to its original wooden plaque.