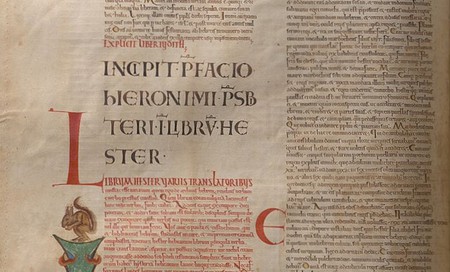 One of the stunning pages in the Codex Bible | © WikiCommons

Alongside being one of the most beautiful buildings in Stockholm, The National Library is also home to one of the most unique and curious items in Europe, the Codex Bible. It has long been studied by medieval historians owing to its size and its content.

Historians have traced its creation back to a monk called Herman the Recluse who created the Codex Bibles in the Czech Republic in the 13th century. It is sometimes called the Codex Gigas as, while it does contain a full Latin translation of the Bible, it also contains a range of medieval reference works. These chronicled both historical events and told stories about historical figures like Cosmas of Prague, a writer who chronicled the history of the Czech people. These works are sandwiched between the Old and New Testament. 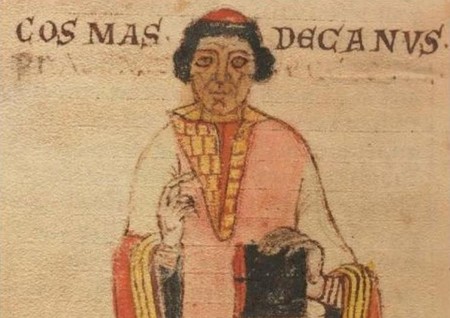 The story of Cosmas of Prague is included in the Codex Bible | © WikiCommons.

The fight for the Codex Bible

Rudolf II, the Holy Roman Emperor, took possession of it in 1594 and kept in in his Imperial Library. Rudolf II was known as an intellectual and was proud of having a collection of great works of literature and reference. He reportedly told monks that he wanted to borrow the manuscript, but he never gave it back to them. How then did it end up in Stockholm and how did the Swedes manage to get their hands on it and wrench it away from someone with the power of the Holy Roman Emperor? The answer, as it often is when discussing the medieval period, is through war.

In 1618, many European powers became embroiled in a religious war with one side hoping to protect Catholic values and the other fighting for the emerging and influential Protestant strand of Christianity. It began as an internal struggle within the Holy Roman Empire but eventually spread across Europe. Sweden only became involved in 1630, but as an emerging military power, had a huge effect on the war and managed to loot and take a great deal of war booty back to Northern Europe. One of the major spoils was the Codex Bible. 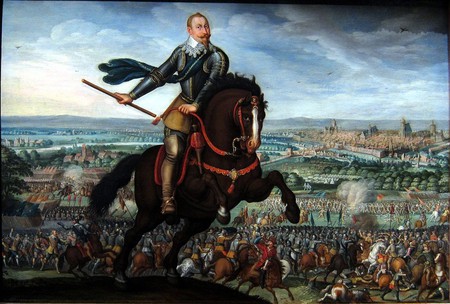 The book astounded them. It is almost a full meter high and half a meter wide with a thickness of 22 centimeters. It features 310 pages, which all have the same handwriting—meaning that the same one person wrote every single page of it, a quite incredible feat considering the amount of content and the painstaking nature of writing at that time. The book is bound between wooden boards and features ornate metal fittings. It is utterly beautiful and the size of it is quite extraordinary.

Alongside all of the perfectly written text, the book also has a number of beautiful illustrations that captivated and enthralled the Swedes who took it back to Stockholm. Each capital letter at the start of a book of the Bible or one of the other texts in the book is illustrated with a number of different colors. According to the National Geographic, experts estimated that it would have taken five years of non-stop writing to create the book—making it even more astounding that it was written by just one monk. 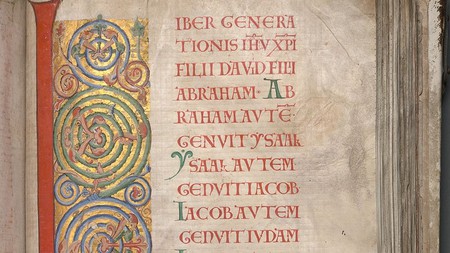 The opening page of Matthew’s gospel in the Codex Bible | © WikiCommons.

Two particular aspects of the book have puzzled and enthralled experts who still discuss and debate them now. The first one is that ten of the pages have been missing since it left Herman’s monastery. There were supposed to be 320 pages, but they were, at one point, removed from the book. It is still not known for what purpose they were taken or even what was on them.

This has helped to add to the myth and legend surrounding the book that grew from one illustration in particular. Towards the end of the Codex Bibles is a full page graphic illustration of the devil, something that seems to jar with the fact it is surrounded with Holy Scripture. The devil is, of course, mentioned in the Bible but a full-page illustration of him seems to be out of place. 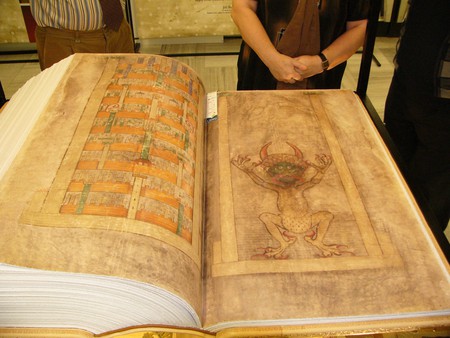 A print of the Codex Bible with the devil illustration | © Wikicommons

He is drawn to look fierce, evil, and ready to pounce as he is crouched on his legs with a green face, horns, and large, sharp claws. He is juxtaposed with a picture of Heaven, which suggests that he was included to show the danger of not following God’s word in contrast to the reward you get if you do. However, one of the legends surrounding the text has a different interpretation for why he is there. This legend states that the monk who created the Bible broke one of his oaths and therefore was to be put into a walled-up room. In exchange for his freedom he promised that he would create a beautiful manuscript in one night and thus set to work on creating the Codex Bible.

As the time began to slip away from him and he realized his task was hopeless he prayed to the devil and asked for his help in exchange for his soul and promised to honor the devil by giving him a place in the book, hence the drawing. While it seems far more likely that Herman the Recluse spent years crafting this book, the alternative legend grew as more people got to see the Bible. 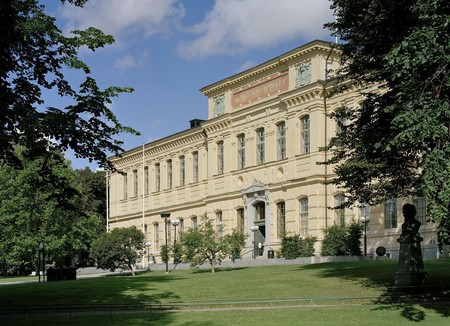 The book resides here at The National Library of Sweden | © Wikicommons.

Where is it now?

The bible has resided in The National Library of Sweden since 1649 and has remained there ever since, apart from a small stint on display in Prague from 2007-8 where locals were able to see the page with the illustration of the Devil that has made the text so famous. The book survived a fire at the library in 1697 but lost a handful of pages in the process. As one of the most special and unique books in the world, it is not on regular display but does, at times, form a part of exhibitions and there is more information about it at the National Library. It is something that will continue to be explored and learned about by manuscript historians for years to come.