Why Monkey Beach is Worth a Visit 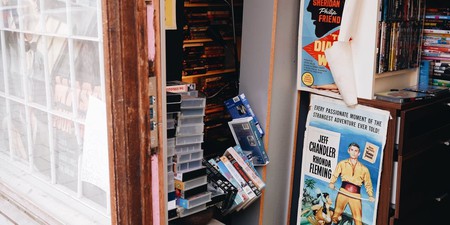 When in Stockholm, plan a visit to Monkey Beach. This place can be a treasure on a rainy or cold day, too. For the film connoisseur, the vintage hunter, the movie lover and the curious, this is no ordinary store.

Monkey Beach is a wonderfully unique video store that has survived the death of the medium it sells. While most of Stockholm’s video rental stores have been forced to close their doors due to changes in technology and the advancement of streaming and pay-to-watch options online, this store has survived without even an email address.

Monkey Beach is truly at home on the southern island of Stockholm called Södermalm. The island was historically home to the majority of the capital city’s working class. Over the years many of its neighbourhoods have shown evidence of gentrification. Södermalm is often referred to as the hipster side of the city, with independent shops and boutiques, vintage or up-cycled furniture and clothes and an eclectic array of bars and restaurants. The store is not online and you will have to make the short journey to Medborgarplatsen to see it first-hand.

Despite the lack of an online presence, several positive reviews describe Monkey Beach as literally packed full of videos, DVDs and Blu-ray films of every genre. It is both Stockholm’s most legendary video store and it’s smallest. What space isn’t covered with carefully organised film boxes is likely covered in movie posters. Think how much fun it could be to find a hard copy of your favourite films, a souvenir both of a dying technology and a keepsake to add to your own collection of pop culture memorabilia.

Internet-shy Monkey Beach inspires nostalgia and feels somewhat like a fanboy’s pop-up museum. If you remember trips to the video store or if you have never been to one, this is a worthwhile venue to visit. Just think: in 20 years, you can tell a story about how you visited the last video store remaining in the world. That is how legendary this place is.

Monkey Beach is open every day except Sunday. The hours are Monday through Friday 2pm–6pm and Saturday 12–3pm.