The Best Public Art in Stockholm 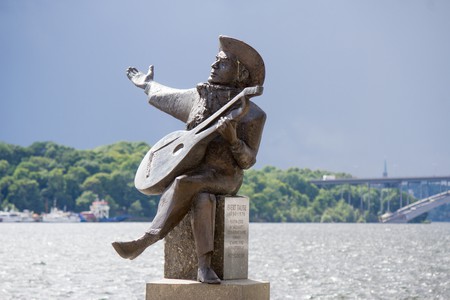 Stockholm is a city that loves culture so it’s no surprise it contains impressive public art. Add in the fact that the government funds and commissions temporary and permanent public art from some of the country’s leading artists, which can mean anything from fleeting street performance pieces to permanent installations. You never know what is waiting for you around the next corner so here’s a taste of the best public art in Stockholm.

The Stockholm subway system is home to the world’s longest art gallery, with many of the stops transformed through sculpture, etching, paintings, light installations, and much more. Each station’s art has been created by individual artists or a team of artists over the course of decades, and reflect different themes, such as technology at Tekniska or an underground garden at Kungsträdgården. For the price of a ticket you can explore all day, filling your senses with art for the ages. 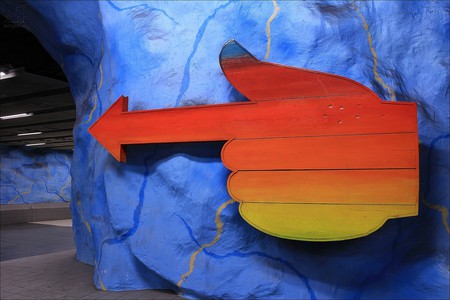 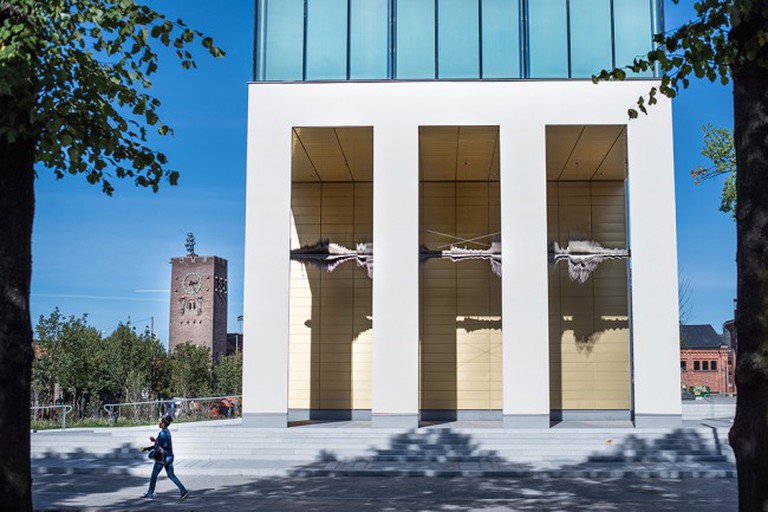 Sound Wave | Courtesy of Public Art Agency Sweden
This contoured aluminium hanging sculpture has been called a sound wave without sound. The idea is to capture silence along one of Stockholm’s busiest roads, where until recently, stood a stable and riding school. Today, the new building houses facilities for the Royal College of Music and this sculpture reminds us to listen to the silence between the sounds.
Open In Google Maps
Stockholm, Sweden
Give us feedback

Leakage in the Garden of Innocence

Beloved Swedish musician and troubadour Evert Taube remains present in people’s hearts, in part because of this statue, which you’ll find at Järntorget on Riddarholmen. Taube was highly regarded by Swedes because he kept the traditional Swedish ballad tradition alive. He has appeared on Swedish bank notes and there are any number of statues of him scattered around the country. This one in particular evokes both his warmth and reputation as a master musician. 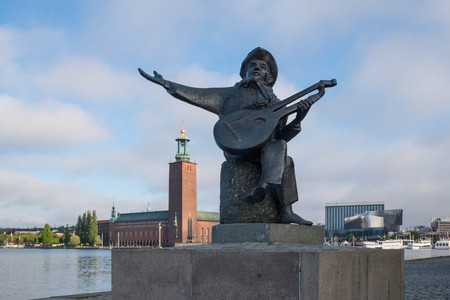 The installation Morgondagens Väder Stockholms Centralstation (Tomorrow’s Weather Central Station) by artists Bigert & Bergström is a grouping of hanging atmosphere molecules, each connected to a weather service via the Internet. The globes change colour depending on weather forecasts. In the middle of the grouping hangs a sole orb that signals temperature, moving up and down and from blue to red, depending on cooling and heating. The globes show the weather that is coming, thus illustrating the future. 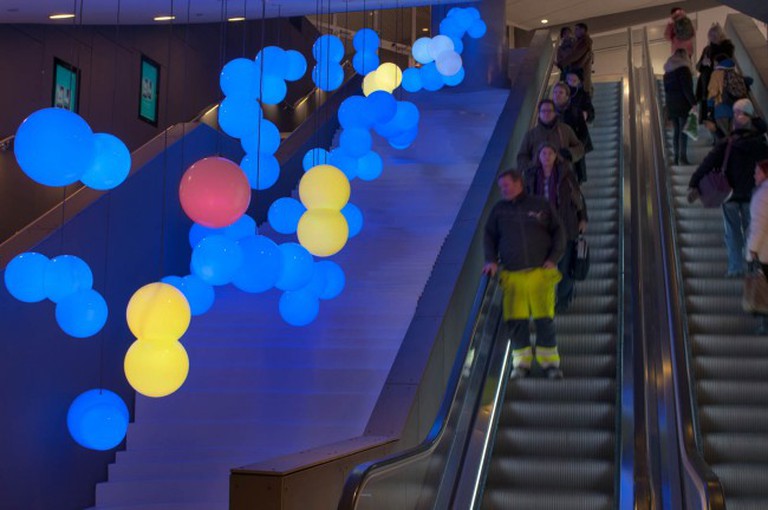 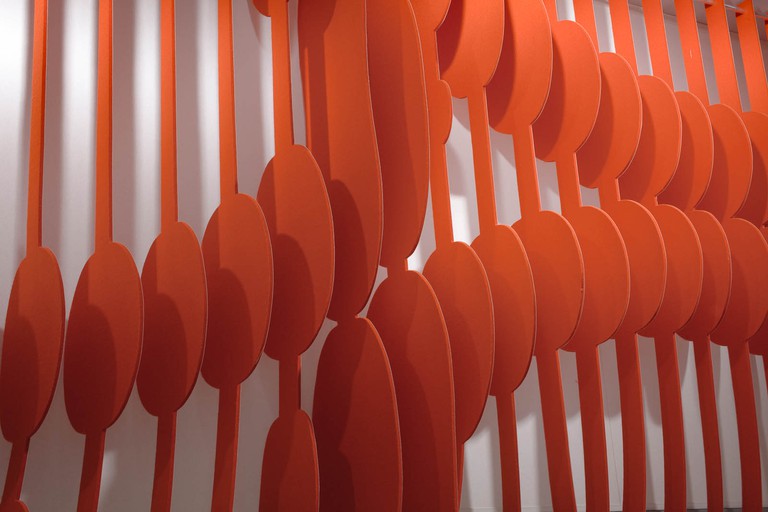 Listening Wall /Photo courtesy Sweden Public Art Agency / | © May Bente Aronsen/BUS 2009. Photo | Per Mannberg.
Seven new session halls built in what was formerly the courtyard of Stockholm’s law court contain installations by May Bente Aronson, exemplifying the seriousness of court proceedings. But while the weight of the law is felt here, the structures also bring a sense of whimsy, with the new work reflecting the historical building in a modern way with simple, geometric shapes and perforated surfaces.
Open In Google Maps
Stockholm, Sweden
Give us feedback 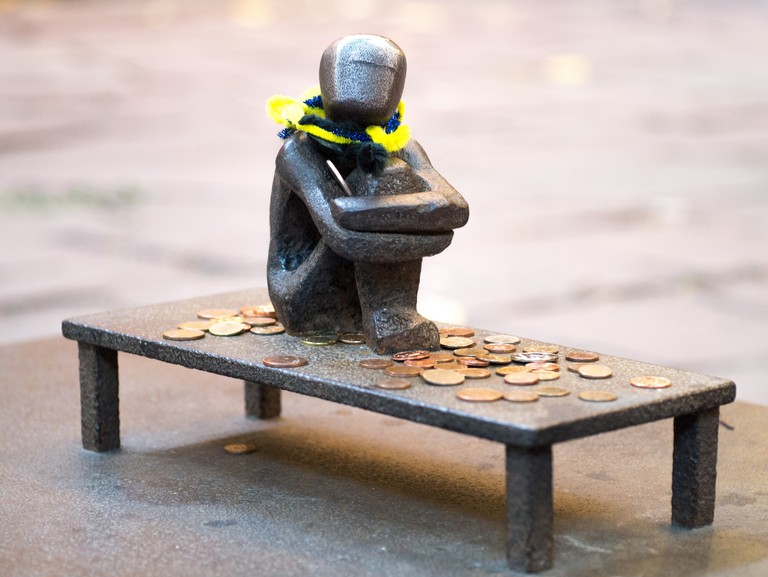 Järnpojke | ©Joakim Karlsson/Flickr
Järnpojke (Iron Boy) is, at just 15cm high, the smallest public sculpture in Stockholm. The piece, found in Gamla Stan, was created in 1954 by Liss Eriksson, but only settled into its current spot in 1967. You can find it just a few meters from the Royal Palace, behind the Finnish Church, although you really have to look for it. As it’s in a place of seclusion it’s something of a secret but those in the know go there to make a small wish and pay homage with spare coins, and in winter, kind-hearted strangers place a tiny scarf around the boy’s neck.
Open In Google Maps
Stockholm, Sweden
Give us feedback

The wild half man/half horse, Centaur, was installed on the slope of the northeast section of the hill at Observatorielunden on the edge of Vasastan back in 1939, a decade after heated debate nearly stopped it being erected. It’s one of sculptor and poet Sigrid Fridman’s best known works, and today the bronze beast overlooks a beloved spot for Stockholmers, who flock to the hill on beautiful summer afternoons. 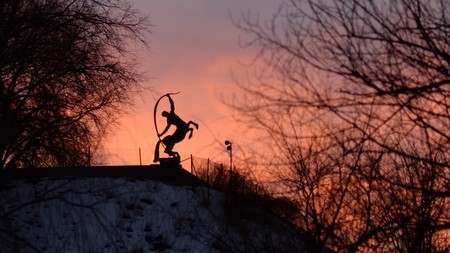 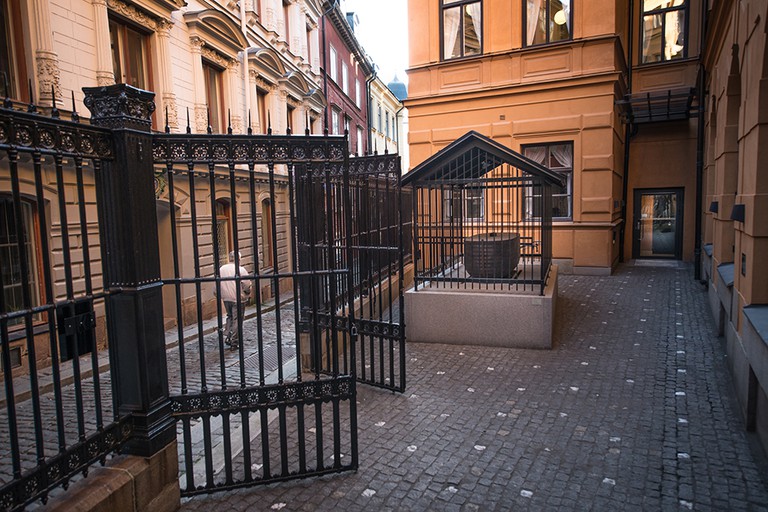 The Ark / Photo Courtesy of Sweden Public Art Agency
Jan Håfström’s feeling for seafaring vessels as well as tar and wood have informed his entire artistic output, and it’s no different with The Ark, which is found in a lane in Stockholm’s Old Town, with the tower of Riddarholmen Church casting its shadow over the work. The piece reflects the history of the neighbourhood, which was once a rough and tumble area where merchant ships docked and life was focused on the docks. The pine ark rests on steel and granite, reflecting the strength of the past while looking to the future.
Open In Google Maps
Stockholm, Sweden
Give us feedback
Give us feedback